Steve Scully, a 70-year-old former worker on Epstein's private Caribbean island of Little Saint James, said he saw the former president sitting with the pedophile in the porch of the island's villa.
.
.
.
Clinton has reportedly denied ever visiting the Caribbean island but has admitted flying in Epstein's private jet on a handful of occasions.
.
.
.
The new claims come on the heels of those made by Epstein's 'sex slave' Virginia Roberts Giuffre who previously alleged in legal papers that she saw Clinton on the island.

Giuffre alleged she had dinner with the former president, Epstein, Ghislaine Maxwell and two other women from New York on the island on one occasion.

She claimed she later saw Clinton 'strolling into the darkness with two beautiful girls around either arm'.

Clinton has not responded to the allegations and his office has previously insisted he knew 'nothing about the terrible crimes' of Epstein. 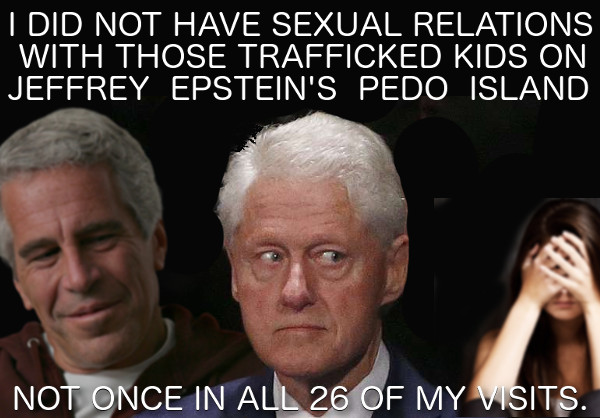 Everybody knew this, it was an open thing, but the powers that were didn’t care.

Nah! You don’t say! What about his wife enabler...

Comey and the FIB PROTECTED Clintons in their treason
and their child rape and murder.
PROTECTED.
110% Is that NOT what the FIB is for?

It was the SWORN Oath of the FIB and DOJ.

Protect the Clintons at ALL COSTS, even the murder
of the USA.

Netflix will remove this very soon.

How much evidence do we need? No one does anything no one cares and they walk

I was a bit surprised to see the Epstein show on Netflix. It never clicked until you mentioned it. The Obama’s do weild some power at Netflix. This very well could be The One, sticking a shiv in the back of Hillary to keep her away from the 2020 race. The Obama/Clinton factions are still struggling for complete control of the democrat party. Both are underhanded. Obama has a long history or getting damaging information released to damage opponents.

The FBI conducted a thorough clean-up of the island so all evidence from there is gone.

Conclusion: there are several levels of Justice in America. And democRATs occupy the most lenient level.

15 posted on 05/26/2020 4:34:39 AM PDT by LouAvul (Put them in fear, O Lord: that the nations may know themselves to be but men. Psalms 9:20)
[ Post Reply | Private Reply | To 3 | View Replies]
To: Dutch Boy; Nachum
The Obama/Clinton factions are still struggling for complete control of the democrat party. Both are underhanded. Obama has a long history or getting damaging information released to damage opponents.

Both sides also have access to the Chicago Plumbers. And both sides have a trail of bodies behind them.

The Clintons still have their Body Count. And our own FReeper Nachum ran the Obama Dead Pool.

It’s good that enemy camps have factions fighting amongst each other IMHO.

Wouldn't that be fun.

Imagine, none of this would of been exposed if Trump had not won.

Where is the Attorney General when you need him?