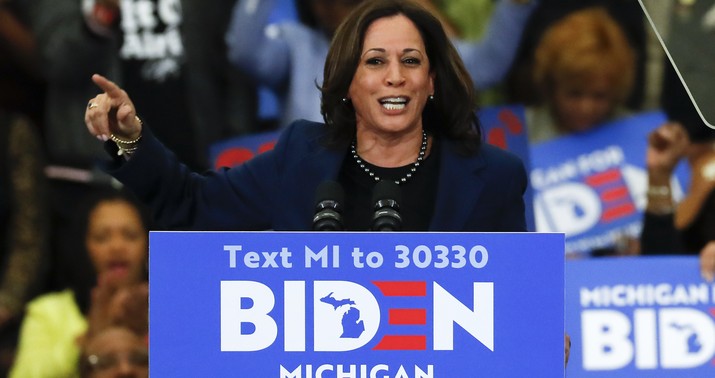 Liberals on Twitter are heckling Charles Gasparino for this report. “What would a Fox Business reporter know about what the Democratic nominee is thinking?”

Well, replied Gasparino, you do realize there are some well-connected establishment Democrats on Wall Street, don’t you?

I mean, the Bernie brigades will talk your ear off about just how many there are.

The irony of people scoffing at this is that, if anything, it seems a little too obvious to qualify as newsy. Of course Harris is the frontrunner. How could it be otherwise?

Philip Klein asks a fair question. Why would Biden choose Harris to appeal to black voters when … he himself appealed to black voters in the primary more than she ever did?

I don't understand logic as to why Harris helps him with black voters given that he was crushing her among that demographic in primary polls. And is there even any evidence that his comment cost him a single vote? https://t.co/f5Zl7lsx1N

I think that’s the wrong way to look at it. Nominating her is less a matter of trying to harness some special connection she has with black voters than a matter of him formally recognizing that black voters had, and continue to have, an essential place in the party. I remember a Times article back in February, shortly before South Carolina voted and launched Biden to the nomination, quoting several black community leaders in the state to the effect that they felt taken for granted by all the buzz about Bernie. Sure, Iowa and New Hampshire liked him, they said, but there are few black Democrats in those states. Maybe hold off on deciding who’s going to be the nominee until the party’s most loyal constituency has had their say.

They had their say in South Carolina. Biden never looked back.

Some black Democrats may believe that the ticket should reflect their influence within the coalition, especially this year, in the person of the vice president. Others, keying off of Biden’s “you ain’t black if you prefer Trump” fiasco last week, may feel newly taken for granted by Biden himself and want to see tangible proof that he means to earn their votes, not just forget about them now that the nomination is his. That’s a special concern for Biden because in some general election polls he’s not faring as well with African-Americans as Hillary Clinton did in 2016. For all the hype about his strength with black voters in the primaries, it’s not translating (yet) to some world-beating margin in head-to-head polling against Trump. And Biden doubtless knows that Hillary underperformed expectations with African-American voters four years ago, which may have cost her the presidency. There may be nothing in his political arsenal apart from an enthusiastic endorsement by Barack Obama that will catalyze black voters to turn out in the numbers he needs this fall. But the least he can do is not risk leaving them feeling snubbed by his VP choice.

Because if there’s a sense of being snubbed, that distraction could nag him all the way to the election.

Which means, in all likelihood, he’ll have to choose between Kamala Harris, Stacey Abrams, and Val Demings. Abrams has contributed to his anxiety about “snubbing” black voters, I suspect, by competing publicly for the VP slot and making occasional comments about how she’d feel personally disappointed if a woman of color isn’t on the ticket. But she’s too young and inexperienced for a nominee who’s so old and in questionable health. If he picks her, swing voters will panic that he’ll die in office and leave them with an untested left-winger as president. Demings has an interesting resume as a former police chief and impeachment manager earlier this year, and she has federal experience as a member of Congress. She’s also from Florida, the swing state with the most electoral votes. But she’s largely unknown nationally and House members rarely get chosen for VP slots because of their low profiles. Paul Ryan is the exception that proves the rule: He was a rock star in the party, someone who’d distinguished himself by 2012 as the most prominent entitlement-reformer in the GOP in an era when Republicans pretended to care about that. Demings doesn’t have a profile to match that.

So it’s Harris by default. She’s the country’s most prominent African-American woman politician, nationally known to Democrats from her presidential campaign last year. She’s a senator, which is generally considered sufficient experience for the presidency, and a former AG of the country’s biggest state. No one much likes her but naming her VP would be a show of thanks to black Democrats from Biden for their support in the primary and a signal that he’s not taking their support for granted. The “snub” problem would be solved. Black voters would be given a seat at the head table, right next to the nominee himself.

Harris has her problems, though. The GOP could highlight her record as attorney general in California as evidence that she’s far less progressive on criminal justice than Democrats, especially black Democrats, might like. I haven’t seen much of her on the trail but her endless stumbling over issues like Medicare for All suggests she’s not much of a retail politician. And it’s an open question whether senior citizens, a key bloc that’s been moving towards Biden, would be as comfortable with a black woman as VP nominee as they would a white woman (or white man). If that’s unfair to older Americans, oh well; just remember that it was openly discussed (albeit in whispers) in Democratic circles during the primaries that it might take a white male as nominee to win back some of the white working-class voters that migrated to Trump in 2016. Democrats worry about lingering prejudices among swing constituencies. Maybe that won’t matter to a Biden/Harris ticket among senior citizens. Maybe it will.

Interestingly, Morning Consult has a poll out today suggesting that another woman of color is Biden’s best bet as VP. And by “woman of color,” I mean 1/1024th.

Warren polls surprisingly well there with Hispanics, a group that’s been lukewarm to Biden thus far and which he badly needs to consolidate before fall. She also appeals more to black voters here than Harris does. Still, we’re talking about small net effects: In Warren’s case, the share that says it’s more likely to vote for Biden if she’s the VP exceeds the share that says it’s less likely to do so by just three points. In Harris’s case it’s one point. And it’s not clear *which* voters, specifically, are being moved by these potential choices. If a group of diehard Democrats who were going to vote for Biden anyway now find themselves marginally more likely to vote for him if he names Warren VP, well, so what? Those votes were already banked.

In the end it’ll come down to Warren and Harris, with Biden calculating which group he can more afford to snub. Progressives, by not nominating Warren, or black voters, by not nominating Harris? I think he’ll conclude that the combination of warm support from Bernie Sanders plus white-hot hatred of Trump on the left makes Warren more expendable — not to mention the fact that having a female Bernie one heartbeat away might spook some of those well-heeled suburban swing voters whom Democrats are eager to hold onto this fall. (Choosing Klobuchar would risk snubbing progressives and black voters so she’s a nonstarter.) Harris becomes the safest choice, so it’ll be her.

Exit quotation via Morning Consult: “[Biden’s] standing among black voters — ahead 76 percent to 9 percent — went statistically unchanged amid a May 22 dustup with Charlamagne tha God, a black radio host whom he told, ‘If you have a problem figuring out whether you’re for me or Trump, then you ain’t black.'”

Constitutionally ineligible but who cares.

How so? Thanks Dan

What a despicable, commie whore she is.

Excellent! We still have a chance to ask her if she did Willie Brown on her knees or on all fours. With crack in the mix, my money is all fours.

She was always going to be his choice. Soros wanted the ignorant slut at the top of the ticket, his plan B is to push her in the VP slot.

Blacks will vote for her in droves. But I at least hope republicans remind the black voters of her terrible job as AG of California.

Hungry hungry hippo won’t be pleased about this.

What makes anyone think slow joe has any say in the matter?

Most democrats would vote for Hitler against Trump.

Either Harris or Warren don’t help him win a toss-up state. He’d win CA and MA even if he picked the Easter Bunny for VP.

If Kammy is selected as VP candidate, expect to hear from Willie Brown putting out dirt and doubt about her abilities.

I think Willie is professionally jealous of Kam, and does not want to see her go any higher in politics than he did as Mayor of San Francisco or Speaker of the State Assembly.

she brings nothing to the ticket, she won’t help him win the rust belt... she’s vile, f’d willie brown to get to the top (women won’t like that)

tulsi exposed her in the debate which led to her downfall on time as AG, expect that to be revisited often

amy Klob is the best choice but after ‘you ain’t black’ and the MN riots, forget about it.

No one on earth is ineligible after the Obama precedent. only that 35 y.o. age limit seems to be still extant, and who knows? that could disappear, too.

She is not a natural born citizen.

Also a fake Negro. She is basing her claim on her Jamaican heritage but that seems to be composed of the White aristocracy there. One drop of blood is the rule and i don’t think she has that. It makes being Black cheap.

Ineligible. And a whore