Police release 911 call to arrest George Floyd which claims he 'was awfully drunk and not in control
daily mail UK ^ | may 29, 2020 | leah simpson

The store clerk who called 911 on George Floyd complained to an operator about an 'awfully drunk' man who was 'not in control of himself'.

A call transcript released by the Minnesota Police Department on Thursday reveals that the caller reported a customer for using a counterfeit bill to buy cigarettes.

The caller said staff only realized the money could be fake once he left the Cup Foods store in Minneapolis. Someone followed him out and demanded he turn in his phone and the cigarettes before he was allowed to leave, however he refused.

'Someone comes our store and give us fake bills and we realize it before he left the store, and we ran back outside, they was sitting on their car,' the caller explained to the operator on Monday around 8.30pm.

Floyd was accompanied by two people at the scene however their identities are unknown.

'And he's sitting on his car cause he is awfully drunk and he's not in control of himself.'

When a THUG removes their property from them and beats them silly, then, and only then, will some get a clue about what we’re up against.

Facts do not matter only feelings.

Being drunk carries a death sentence in Minneapolis? Guess it’s because all the somali muzzies.

No, but is always nice to get a few facts in before making knee jerk reactions. Especially before destroying a town

Remember all the riots in Minneapolis when that piece of crap Somali cop shot that blonde Aussie lady? Me neither.

The dude was 6’7” and on something and a knee to the back of the neck like it or not is part of MN police training.

Tossing that insult around will work until it doesn't.

Drunks can certainly be difficult...many years working in a big city ER taught me that.But my years there also taught me that one doesn’t place their entire weight on someone’s neck unless a) they’re utterly insane or b) they’re trying to “send a message”.

The police action wasn’t OK. It turns out that Floyd and Chauvin worked security at the same club.

Did Chauvin know something we do not? Was Floyd drunk? Based on how he walked during the video, maybe.

Why did the district attorney cancel the new conference yesterday when there was supposedly new information?

They released the 911 call. Something smells. 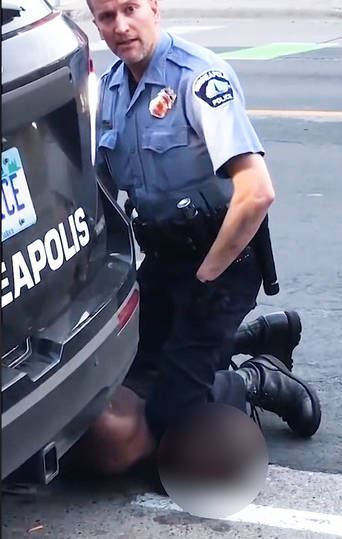 Some hero you have there pal.

But I have trouble believing the same is true of this guy...even if he was drunk.

This is simply desperate and surreal..

Whut? You’re not out there burning buildings in protest like the rest of them? No way!

It’s not OK but was it murder? I’m trying to say to you that a big guy who initially resisted arrest, it’s up to the officer to use a knee in the back of the neck to his discretion so the mere act of using it as a restraining technique is not an act of murder. why can’t you damn people get that through your thick skulls. And what if he died of an overdose?? I didn’t say he was drunk I said he was probably on something the guy who made the call said he looked drunk but since he has past drug related crimes in his history chances are he was probably on something not drunk. WE SHALL SEE.

Thank you for posting this. I suspected the possibility of alcohol and/or drugs which if so will be confirmed in the autopsy results. This might also explain why there’s a spittle puddle next to his face, and he lost control of his urine which ran next to the vehicle. He had complained of his stomach being upset as reported prior.

Of course this doesn’t mean the officer isn’t responsible for the death of Floyd as he died in his care. But it would add to Floyd’s inability to endure the pressure of the knee hold, and all the more if he was resisting any time during the arrest.

IMO, the policeman went too far. Does he have issues, perhaps. If this was an every day event by the police, I could see the point of huge demonstrations. But it is not. Two wrongs do not make a right. So, faced with peaceful protests, no problem. When they get to the point of arson, looting, and assault, it is beyond protest. Even if they have to lock everyone up and get into a street war with the thugs, don’t let the rioters get the upper hand or this is just the beginning. Letting them throw a tantrum is like letting your kid run wild. Once permitted, there is no future societal control. I said yesterday this is like the 60s redo.

What was the official cause of death?

There is more to this story than meets the eye. Some of us will wait until we know more.

Some will just go full retard and hang everyone before the trial.