To: Fedora
The contact person for Philly REAL Justice is one Deandra Jefferson, who represents a coalition to the left of Black Lives Matter that wants to abolish Philadelphia's police: Meanwhile, the Black Philly Radical Collective, a group of 12 organizations including Black Lives Matter Philly and Philly for Real Justice, want to go much further. The collective wants to prevent increases to the upcoming police budget, nearly $23 million in funds. All private police forces, including university and transit police, should be disbanded, they say. There are additional calls to replace the Police Advisory Committee with a Community Control Board that can hire and fire officers. The list goes on. Ultimately, King wants reforms for the existing department, the coalition is looking to defund and abolish the current system. . .In addition to the list of demands the collective laid out, it has been the stance of Black Philly Radical Collective not to coordinate protest routes with police during marches. “We’re not going to ask the same people that murder us, ‘Hey, is it ok if we protest you murdering us here and now?’” said Deandra Jefferson with Philly for Real Justice. “That just doesn’t make any sense, to ask for permission from the people who are the problem.”. . . Washington and Jefferson know there are several protests happening in Philly any given day and activists don’t want to discourage people from participating. The crux of the matter, said Jefferson, is people who want to lend support need to do their research and analyze the proposals different groups are putting out. Jefferson encourages anyone who wants to come out and march to “get their politics in order” and avoid the knee-jerk reaction to “run from march to march” because not all Black people have the same class interests. “Oprah’s not worried about this,” she explained. “Diddy’s not worried about this. There are certain people who, because of the socioeconomic class that they’re in, even though they’re Black, they don’t have the same motivations. They don’t want to completely overhaul the system because, individually, the system has treated them pretty well.”: BLM organizers: Double-check what demands protest is making

Jefferson looks to have ties to Temple University, where the coalition also has ties to a "pastor" named Renee McKenzie who shelters illegal immigrants as part of the New Sanctuary Movement of Philadelphia.

18 posted on 06/12/2020 11:36:15 PM PDT by Fedora
[ Post Reply | Private Reply | To 16 | View Replies ]
To: piasa
Here was the group's agenda in 2016, when they positioned themselves to the left of Bernie Sanders to "shut down the DNC": "Progressives, socialists, peace activists, feminists, environmentalists: Let's build a united front to take on the racist, capitalist Democratic war machine! The Presidential elections that take place every four years bring about only cosmetic changes: different faces running the government while the same billionaire masters still call all the shots. Whether it's Clinton or Trump, Democrat or Republican, police will still terrorize us and low wages will keep us in or near poverty. That is, unless we fight back! WE'VE HAD ENOUGH! No more fake "democracy" in our city! NOT while racist cops run wild. NOT while our public schools go criminally underfunded. NOT while our people suffer some of the highest pov...erty levels in the country. We demand self-government, not super rich capitalists. Free Mumia and all political prisoners! Reparations now! Women's and LGBTQ liberation now! Abolish capitalism and oppression NOW! It'll only happen if we FIGHT FOR IT!" 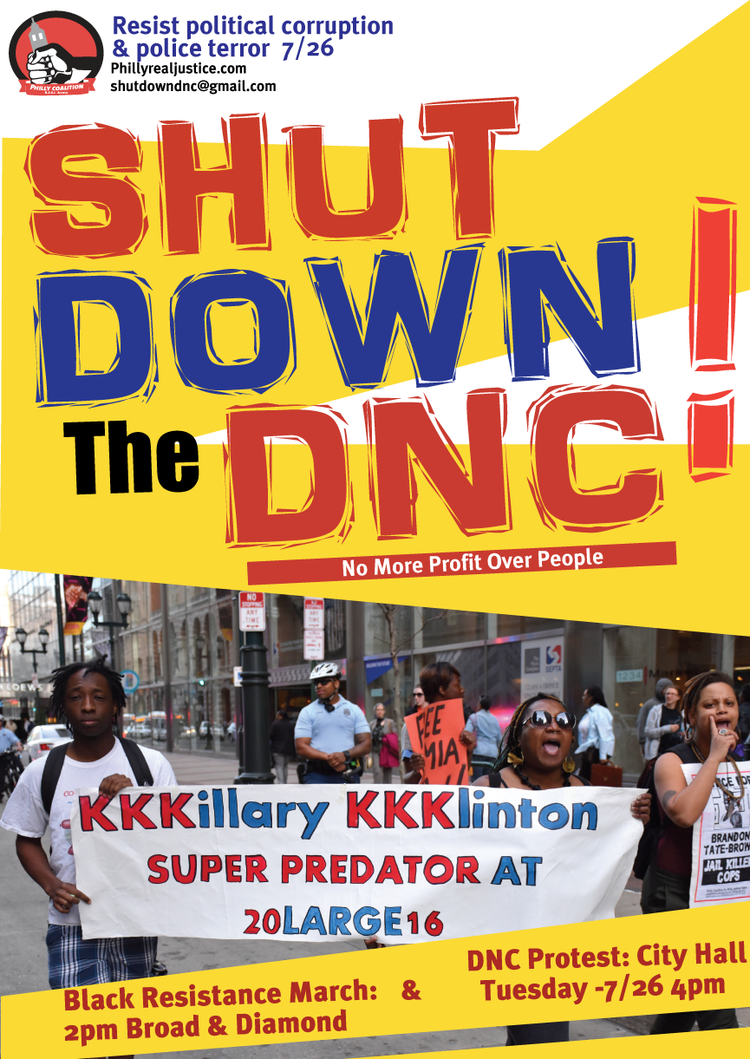 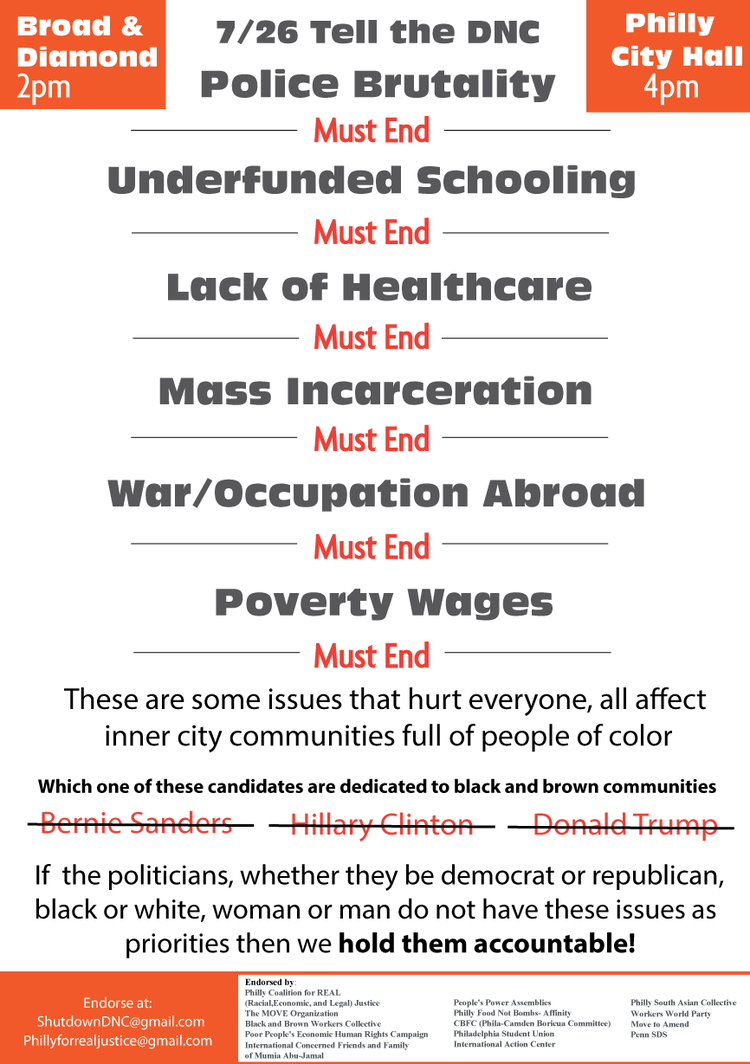