Another poll created for Fox News is shown to have heavy bias. We discussed last October 11, 2019, how a Fox News ‘Trump impeachment poll’ over-sampled Democrats, thus creating bias in the polling results.

Once again a new 2020 Fox News Election Poll is riddled with bias.

Fox News does this to keep you glued to the TV. They also do this to curry favor with liberal idiots. Fox News is part of the problem. 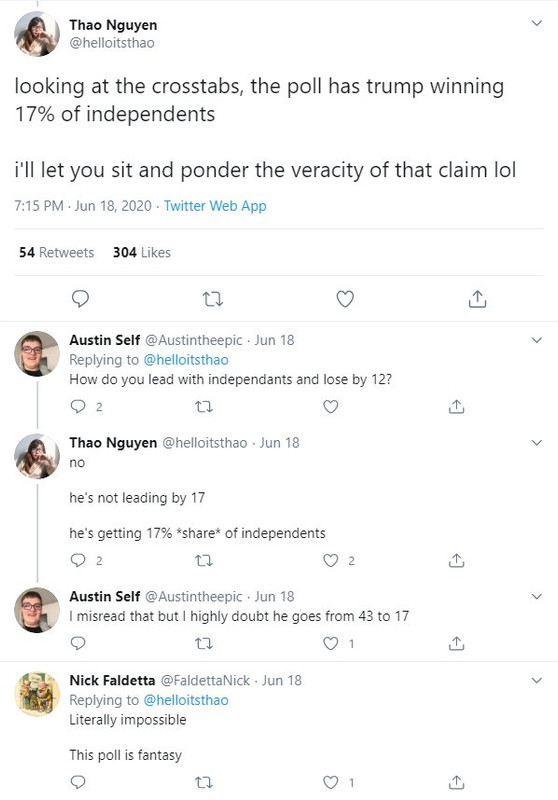 Fox News and their never-Trumpers are not so bright.

Chris Wallace is pleased and smirking.

6 posted on 06/22/2020 12:53:54 PM PDT by Governor Dinwiddie (Guide me, O thou great redeemer, pilgrim through this barren land.)
[ Post Reply | Private Reply | To 1 | View Replies]
To: Repeal 16-17
Polls. Polls giving a valid, reliable public opinion information is a lot like catching a fart with a butterfly net.

My first issue, is that, for some reason, while we all know the media creates fake news, they somehow exempt reported polls from that assessment. I bet if CNN wanted a poll showing Trump behind by 30 points, they could get one. First is their methodology. Second is their weighting. Third, is ten different polls would show ten different results. How do we know that ten polls weren't taken, and we are only seeing the poll that the media outlet wants to report.

Third. Any poll before the conventions are virtually meaningless. Most people aren't even thinking about the election right now.

Fourth. Enthusiasm isn't measured in polls. A respondent can easily say he supports Biden in a poll, but won't be bothered enough to get off his ass and actually cast a vote.

Polls in 2020 are, at best, highly suspect, and at worst (and most probable), part of an organized propaganda effort. Don't sweat. Just vote.

>>42% of the people surveyed said they have a positive view of Senator Mitt Romney (R-UT); <<

Wait, what? Why in the hell are they even asking about Romney? Tells me right off that is a poll with an agenda.

Faux News is not FU News.
The only three people there are not worth the effort to get me to watch.

Fox contracts out their polling. If I were them, I would change contractors as it is obvious that the Polling Service they hire is biased against Trump and its’ credibility is in the tank.

I have been seeing a slow movement of Fox News to the left. If it weren’t for the Tucker Carlson, Hannity and Laura Ingraham, I am not sure I would watch it anymore. The most glaring example of Anti Trump people on Fox is Chris Wallace. He is following in the footsteps of his ultra liberal Dad Mike Wallace. Every time you see him in an interview or when he is responding to questions, his Anti Trump bias pours out. Whenever I see him on the screen, I either switch the channel or press the Mute button.

With all of the media bashing, day in and day out, night after night, the majority will probably vote yes!

Now I do a nationwide but localized polls: Do you believe that your police are racists and need to be defunded?

I'm fairly sure that the majority will vote no!

On No! Our police are of the very best! 😮

Faux Snooze is NOT our friend! The Murdoch boys and their wives, along with Paul Ryno, are seeing to that!

Turn on Fox Business if you want to watch conservatives. Except Neil Cavuto!

Fox News is not “fair and balanced”. That is long gone, today they reflect their leftist leaders. Their polls, like all of those sponsored or paid for by the media are designed to influence public opinion, especially at this stage of an election year. They may adjust starting in October, because they will want to be closer to the actual election results to improve their credibility.

This poll is pure propaganda.

and I believe as long-time listeners we are owed an answer.

FOX NEWS sure isn’t keeping me glued to their network...

I broke that addiction and so glad I did...and I’m glad it is Summer...as I will be outdoors enjoying life and not indoors glued to the tube...

Thanks for posting a link to this article by netadvisor. I remember polls by both ABC and CBS having Hillary Clinton leading Donald Trump by at least 9 points after the second presidential debate. Netadvisor seems excellent at predicting presidential elections and should be watched over the next several months.

Fox News polls are as accurate as the $2 Rolex that is sold in Mexico.