As the influenza pandemic swept across the United States in 1918 and 1919, masks took a role in political and cultural wars.

The masks were called muzzles, germ shields and dirt traps. They gave people a “pig-like snout.” Some people snipped holes in their masks to smoke cigars. Others fastened them to dogs in mockery. Bandits used them to rob banks.

More than a century ago, as the 1918 influenza pandemic raged in the United States, masks of gauze and cheesecloth became the facial front lines in the battle against the virus. ...the masks stoked political division...medical authorities urged the wearing of masks to help slow the spread of disease...some people resisted.

In 1918 and 1919, as bars, saloons, restaurants, theaters and schools were closed, masks became a scapegoat, a symbol of government overreach, inspiring protests, petitions and defiant bare-face gatherings. All the while, thousands of Americans were dying in a deadly pandemic.

The first infections were identified in March, at an Army base in Kansas, where 100 soldiers were infected. Within a week, the number of flu cases grew fivefold, and soon the disease was taking hold across the country, prompting some cities to impose quarantines and mask orders to contain it.

Organized resistance to mask wearing was not common. “There were flare-ups, there were scuffles and there were occasional groups, like the Anti-Mask League, but that is the exception rather than the rule.”

At the forefront of the safety measures was San Francisco...By the end of October, there were more than 60,000 cases statewide, with 7,000 of them in San Francisco. It soon became known as the “masked city.”

TOPICS:
KEYWORDS: 1918; coronavirus; covid; covid19; davidchase; davidchaseisgod; davidchasemedpro; fauci; glennaro; hunting; influenza; karen; listen2davidchase; mask; masks; orange; trump Navigation: use the links below to view more comments.
first 1-20, 21-40, 41-60, 61-80 ... 121-138 next last
It's interesting that, of the the seven cities that quickly passed mask laws, six are in the West. The Western frontier had "closed" only 28 years earlier and now the Westerners were putting in place mask laws. It's ironic given that the West was lawless for so long during the westward expansion. 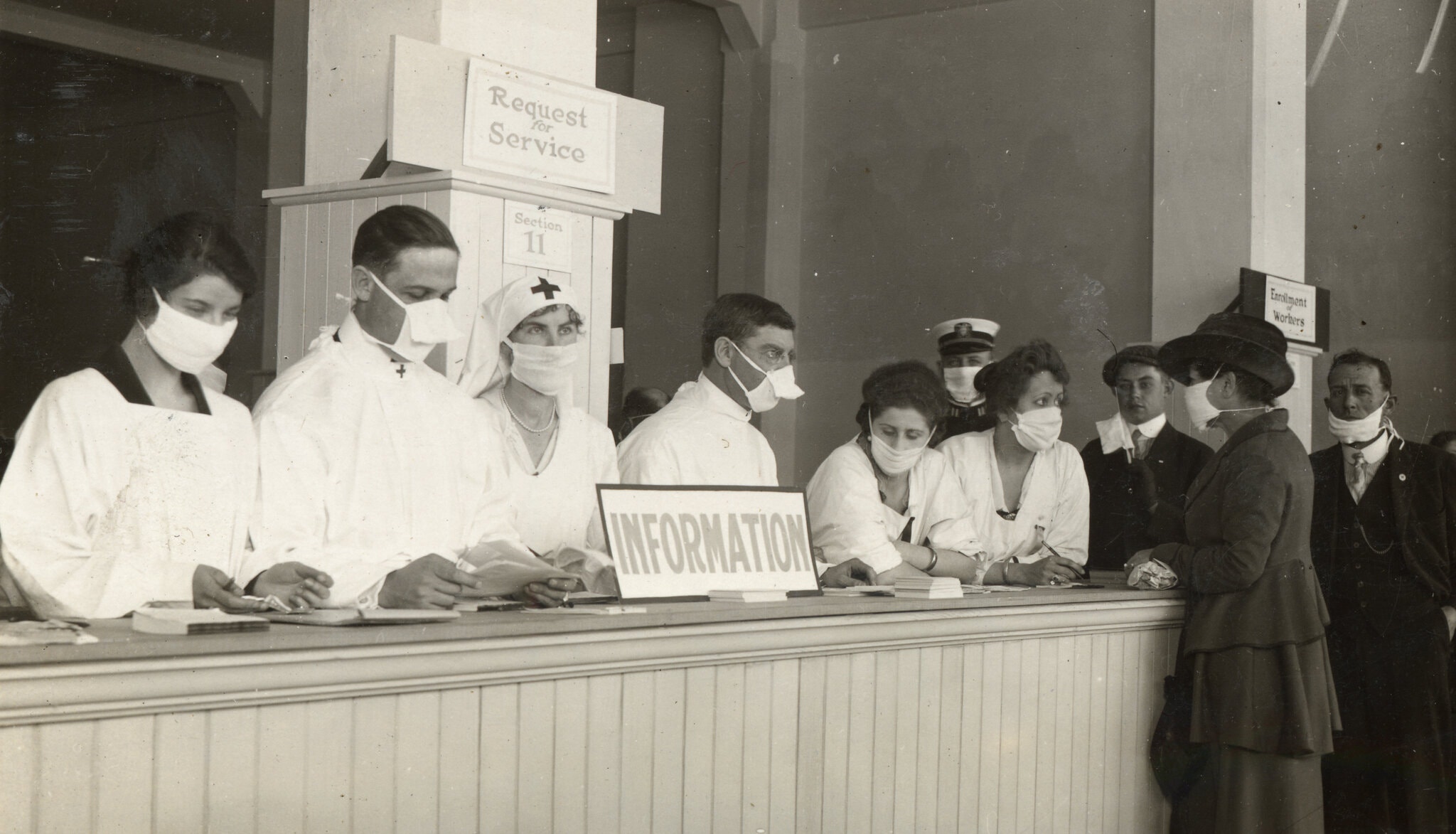 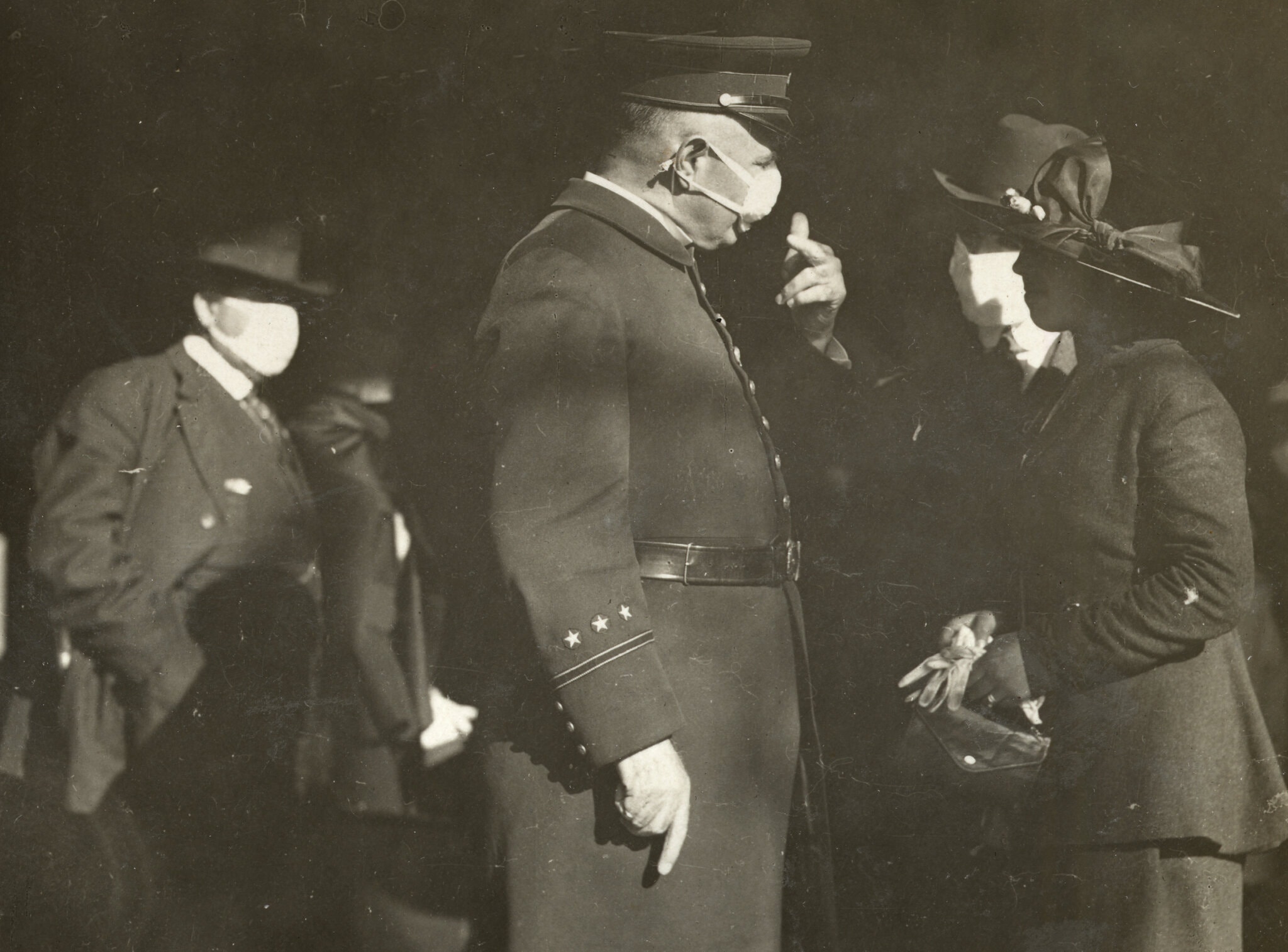 A policeman wearing a flu mask talking to a couple, one masked, one not. Credit: Hamilton Henry Dobbin, via California State Library 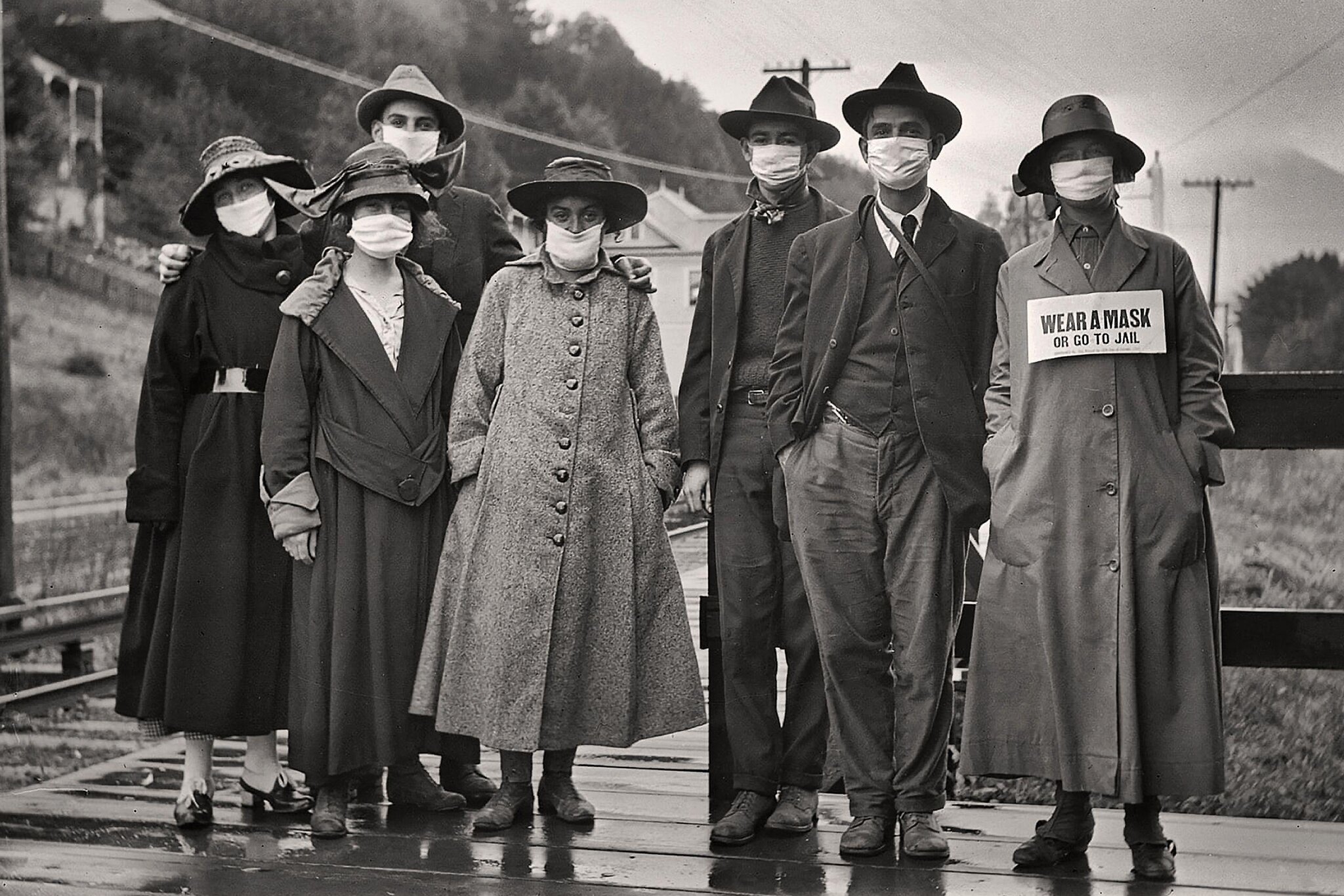 Rail commuters wearing white protective masks, one with the additional message “wear a mask or go to jail,” during the 1918 influenza pandemic in California. Credit: Vintage Space/Alamy 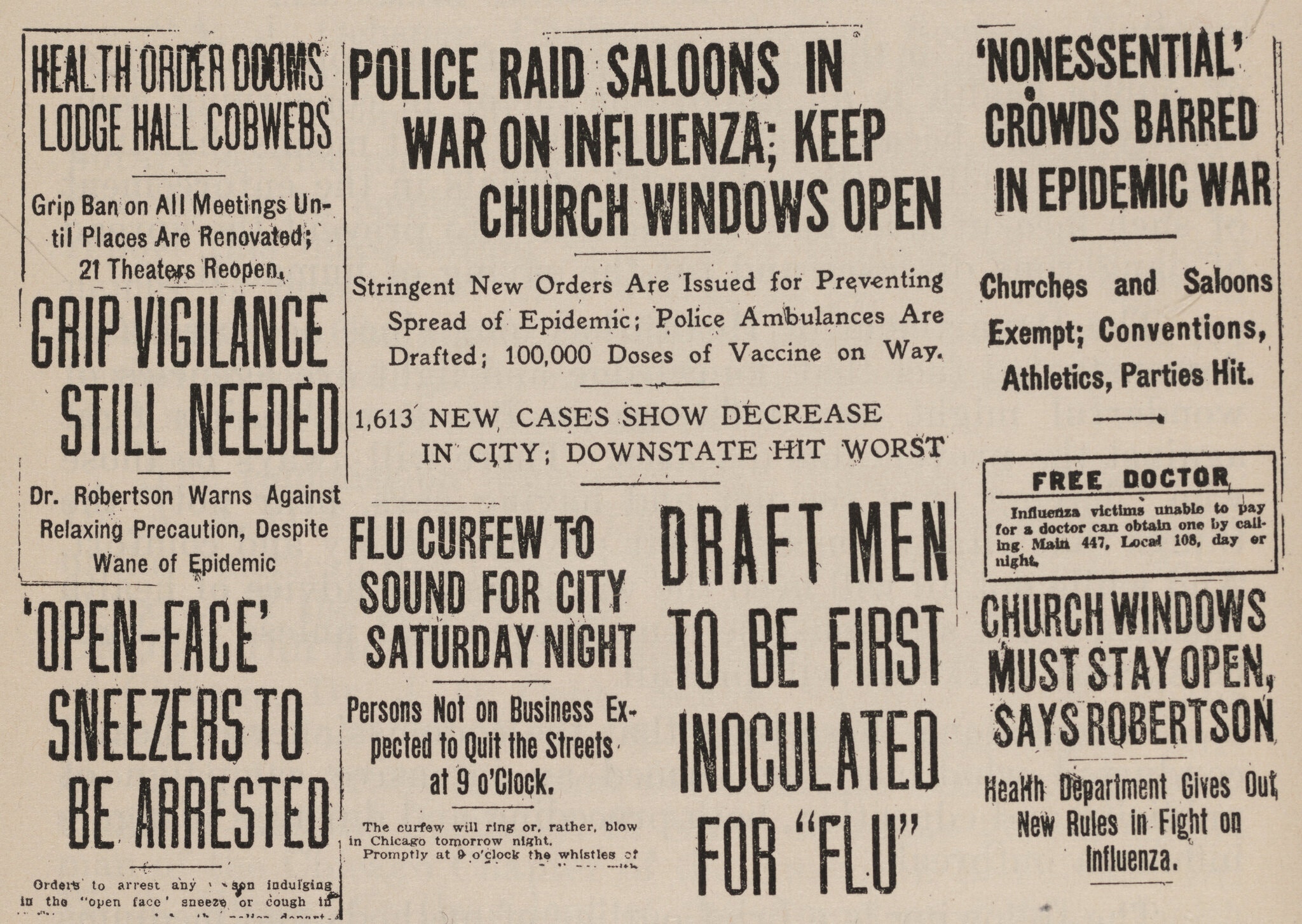 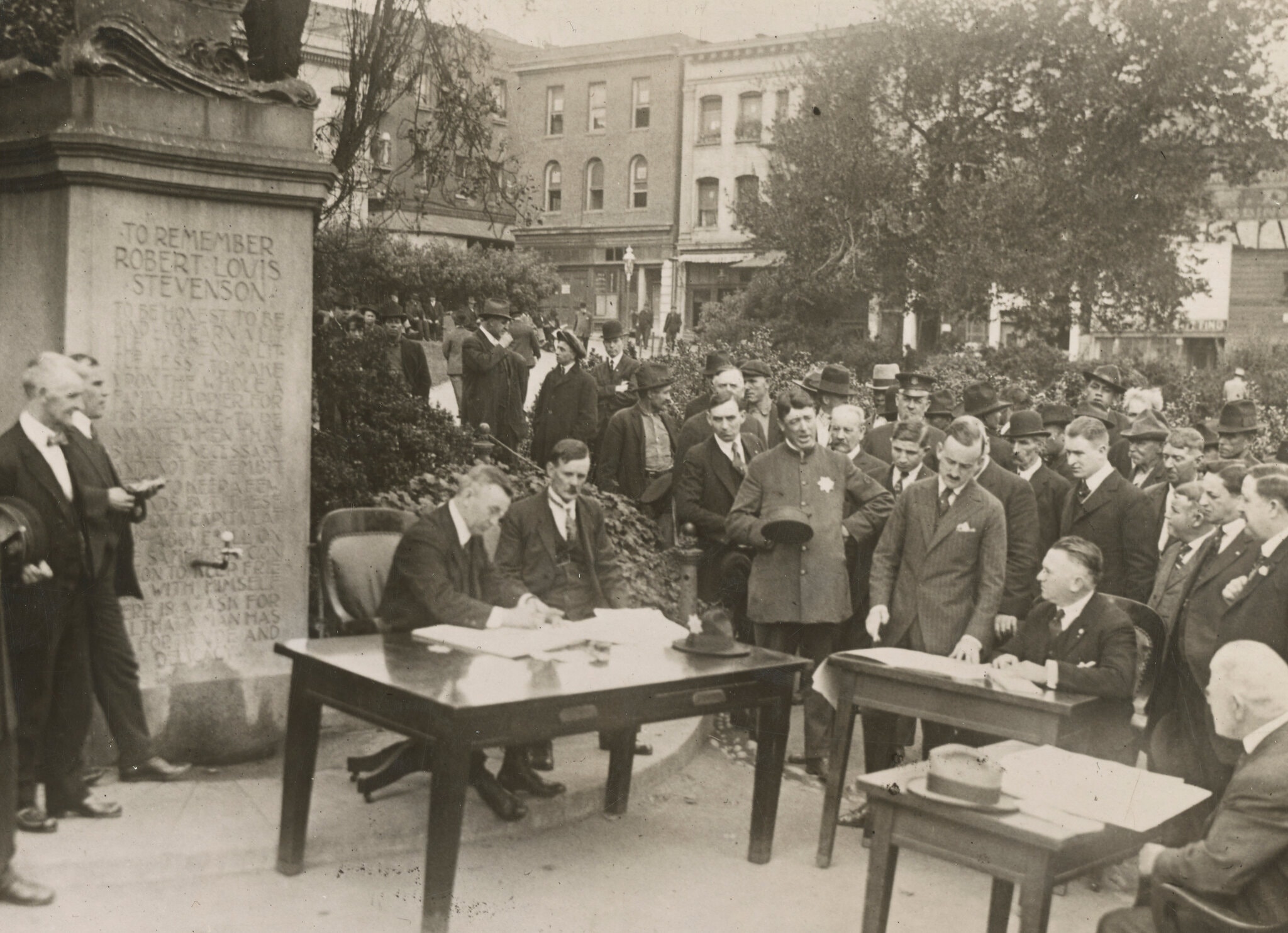 Police Court Officials of San Francisco holding a session in the open, as a precaution against the spreading influenza epidemic in late November of 1918. Credit: National Archives 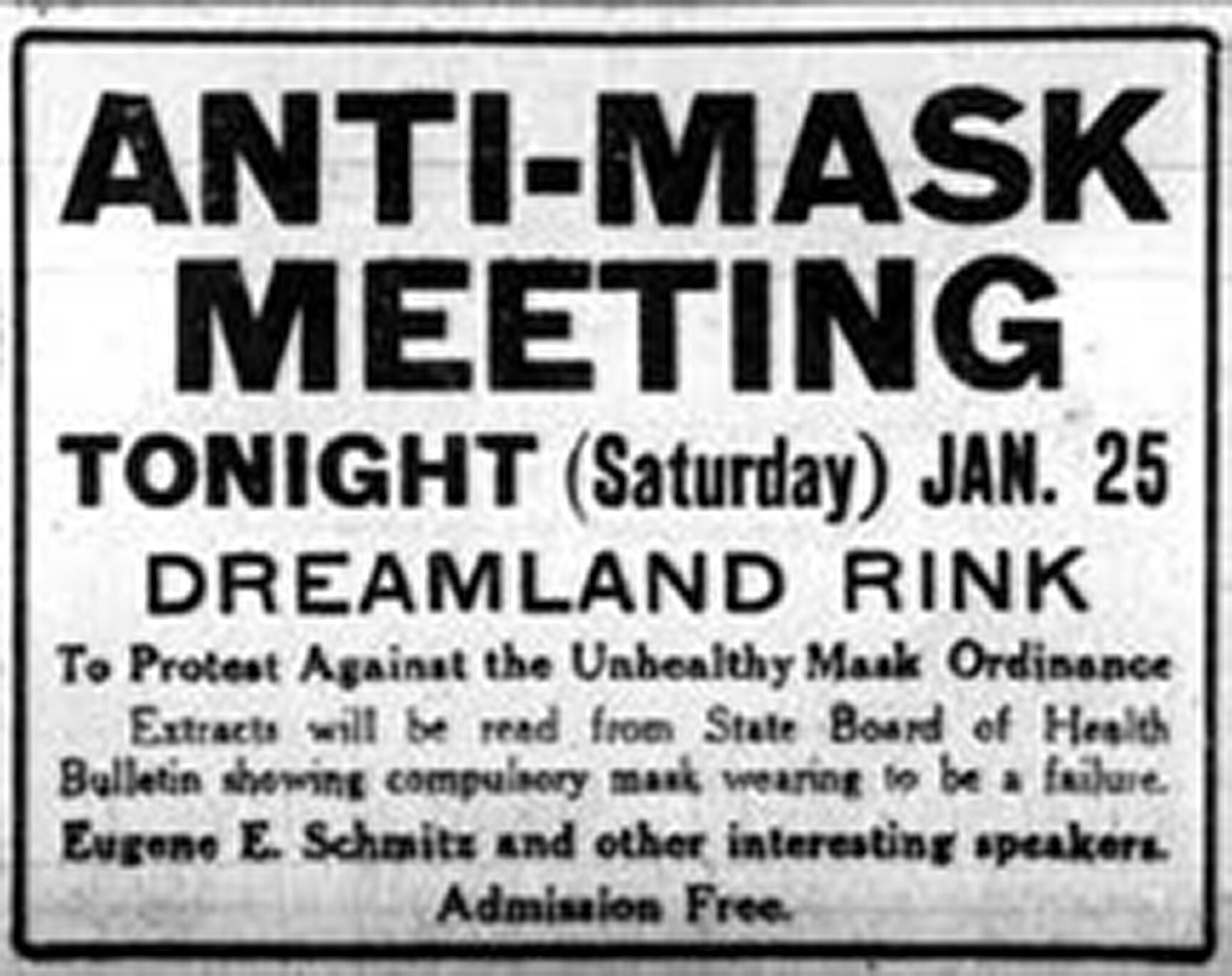 A call to protest by the Anti-Mask League in The San Francisco Chronicle, on Jan. 25, 1919. Credit: UC Berkeley 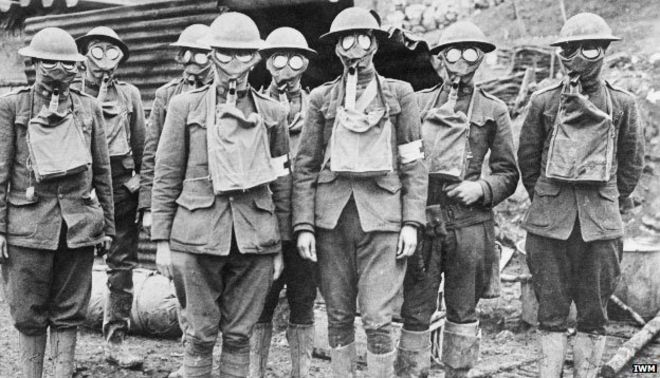 We are the progeny of those that survived. We’re apparently tougher because this one is not really all that deadly.

Still here we are 102 years later and the Anti-Maskers sound exactly the same. But Darwin Loves them.......

Insanity is doing the same thing over and over and expecting a different result. We’re living in an insane world and I can tell you it ain’t easy being sane in it.

Masks are useless. They make it worse. The germs settle in the mask and get concentrated. If you get the virus on your mask it is also getting on your clothes, your hair and in your eyes. If you have the virus in your mouth or lungs you can’t expel it and you end up inhaling it over and over.

But the same “expert” who told us not to wear one in March is now demanding we wear one all the time.

We are bring played.

Wear a mask at your own risk. But it isn’t going to help you and it may kill you.

Yep. Usually, when I enter Costco, I have them give me a mask and I wear it in, then immediately remove it. But last time I had employees chasing me down constantly telling me to wear it. So I pulled out my old one they gave me with all the slits in it and the problem was solved. I’m breathing freely, but they see I have a mask.

And since they don’t really want to cause a scene, they figure their job has been done, even if they can see the big holes in my mask. It’s not worth it to them - unless it is a true Karen. But so far, so good.

I have seen no science that prives masks work.

Until then, I’ll do whatever I please.

Wonder if opinion on masks was split along party lines like it is now.

These days the masks play right into the country’s ideological and cultural divide.

My guess is the masks were far less political in 1918.

Still here we are 102 years later and the pro-Maskers sound exactly the same. But Statists Love them.......

So just seven cities in this huge country had mask laws. No state nor the federal government nor any other city town or village had such laws.

And I notice the artical says laws not executive orders. I wonder if these local laws were actually passed the right way.

For all the screaming about this country being steeped in racism, I notice that in the first picture, there is a black nurse there, dispensing information, and no one seems to care in the least. Just a thought.

Oh so clever.........as you Anti-Maskers are losing your charm quickly too.

Tell me freedom loving faux conservative........where were you when the Hunting Laws required you to wear Orange to hunt or face a fine or hunting rights suspended?? Tell me you protested.......

Where were you when shoes are required to be served in a restaurant or be allowed to remain in a store, or public building? You spoke up didn’t you?

You have zero right to infect other people.
The tide is changing.......be ready, you will be wearing a mask until this virus is under control.