Graham: Weve Got the Votes to Confirm Justice Ginsburgs Replacement Before the Election
theepochtimes.com ^

“We’ve got the votes to confirm Justice Ginsburg’s replacement before the election,” Graham said during an appearance on Fox News’ “Hannity.”

“We’re going to move forward in the committee, we’re going to report the nomination out of the committee to the floor of the United States Senate so we can vote before the election. That’s the constitutional process,” he added.

I’ve sometimes been a non-fan of L. Graham, but credit where credit is due. He’s been solid on this. 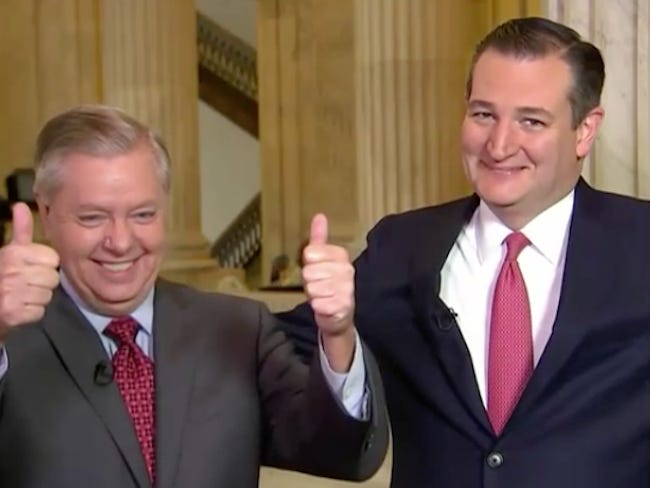 He’ll fail, as usual. Given the timing, I don’t think the Senate vote will occur until the week after the election. The candidate may still pass, but there will be at least three or four events to occur before the election, and the 4-4 split of the court will hinder the election in a major way.

Doubtful the “protests” at his home were a deterrent.

Oooh, I bet the Democrats didn't like that one.

7 posted on 09/22/2020 1:27:00 AM PDT by GrandJediMasterYoda (As long as Hillary Clinton remains free equal justice under the law will never exist in the USA)
[ Post Reply | Private Reply | To 1 | View Replies]
To: pepsionice

Pres. Trump is quietly stiffening the backbones of Graham, McConnell, and others ...

(we’re all helpless observers anyway, so enjoy the show!!)

They will confirm before the election. After the election, the yes votes that they have today will be less reliable.

Mitch sets the agenda. He will choose the date for the vote.

“the mere fact that the Left is screaming so much”

They are toast. This confirmation will drive the narrative until the election and beyond. Biden will watch the hearings from his basement.

THANK YOU Senator Graham!
You will deserve tremendous praise in helping get this done ASAP!
We cannot afford a vacancy on the court now that the D’s are threatening to steal the election and now that they have a reported 300 attorneys lined up to try it

Did Lindsey say “Stay Tuned”? Because we all know what that means.

When did epoch go all-in on the “sign up to read the full article” sales pitch?

It keeps kamala off the campaign trail. I hope hearings last a month. Lol.

One of the cool side benefits of this is that it should keep Kamala off the campaign trail while the Senate hearings on the SCOTUS nomination.

I heard they have 600 attorneys across the country. However, we have an equal amount of more. It’s going to be the ugliest election in history. Oh what fun!

I believe there’s a lot of pressure among Senators to get the new SC justice confirmed before Election Day. Many of them probably figure they don’t want voters to feel that their votes can somehow influence the results of the confirmation process. A quick confirmation effectively removes the SC nomination as an election issue entirely. The GOP may also figure that a quick confirmation will solidify their support even among many NeverTrumpers ... and will completely demoralize the Democrat base. 
Remember that linda is up for reelection in November

19 posted on 09/22/2020 3:08:01 AM PDT by upchuck (Congressional subpoenas. Congressional hearings. Criminal referrals to the FBI. It's all just Kabuki)
[ Post Reply | Private Reply | To 1 | View Replies]
To: napscoordinator

The campaign trail will be inside the hearing room. If Trump nominates the latina the optics will be really bad for Kamala.