Amy Coney Barrett, a front-runner for the open U.S. Supreme Court seat President Donald Trump is pushing to fill, is a favorite among religious conservatives.

As a judge on the Chicago-based 7th U.S. Circuit Court of Appeals, Barrett, 48, has voted in favor of one of Trump's hardline immigration policies and shown support for expansive gun rights. Here are some of her most notable opinions.

She was part of a three-judge panel that considered a challenge to a federal law that bars people convicted of felonies from owning firearms. A businessman who had pleaded guilty to mail fraud argued the law was unconstitutional as applied to him.

The two other judges, both appointed by Republican President Ronald Reagan, said the federal law and a similar Wisconsin one were constitutional.

In a dissent, Barrett said that, absent evidence the man was violent, permanently disqualifying him from owning a gun violated the Second Amendment of the U.S. Constitution.

"History is consistent with common sense: it demonstrates that legislatures have the power to prohibit dangerous people from possessing guns," Barrett wrote. "But that power extends only to people who are dangerous."

Me likey! She’s stronger on the 2nd Amendment than those two Reagan judges she dissented from.

Her support of the Second Amendment is probably the most important quality of a Supreme Court judge.

We can’t let the left talk us out of supporting her,barring any rulings where she rejected the Constitution.

And, on further reading, she’s no slouch on immigration and abortion either. Me likey even more.

In before the campaigners for Jeb’s Florida candidate.

Barrett would definitely be my choice. She at least has a track record of conservative opinions. I’d be a bit wary of Lagoa.. first off, she garnered the votes of 27 dems when she was confirmed. That, along with her relatively scant track record, speaks to a redux of David Souter, who GHWB appointed without knowing his stances on abortion, 2A, etc.

5 posted on 09/25/2020 2:53:28 AM PDT by ScottinVA (First, letÂs deal with the election; then weÂll deal with BLM.)
[ Post Reply | Private Reply | To 1 | View Replies]
To: GonzoII
Barrett, 48, has voted in favor of one of Trump's hardline immigration policies and shown support for expansive gun rights.

No tendentious verbiage here! It's almost as if the publication doesn't understand that the United States has a published Constitution with, like, words in it and stuff.

The second amendment shall not be infringed. Those committing violent crimes need to pay with their life for the violent crime, so their second amendment shall not be infringed. It is a right we all have no matter what. If it is taken away of one, even seemingly justifiably because of the possibility of misuse, then it can be taken away from everyone.

Violent criminals should not be allowed to continue to terrorize society.

“Violent criminals should not be allowed to continue to terrorize society.”

Very good point. And if we look back just 100 years, the death penalty would have been applied, in most cases. 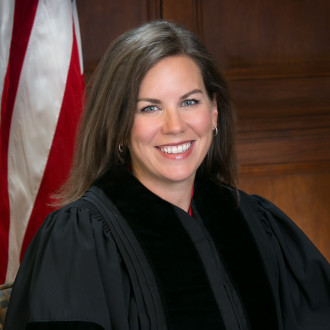 Rest assured the Left does NOT want ACB...ha...just realized she’ll fit in nicely as she has a three letter acronym...ACB replaces RBG :)

Not even the ones in prisons!

Yep. That seals it for me. She is definitely my first choice.

I like Britt Gantt too. If Trump wins another term, he is likely to get 2-3 more Supreme Court nominations. Let Judge Gantt get another couple years of seasoning on the Circuit Court then elevate her to the Supreme Court.

That is how I read Lagoa also.
The true good picks bring out the Crazy Left.
Bork
Thomas
Kavanagh

“In June, Barrett said in a dissenting opinion that she would have let one of Trump’s hardline immigration policies go forward in Illinois. The litigation was over the “public charge” rule, a policy of denying legal permanent residency to certain immigrants deemed likely to require government assistance in the future. Barrett dissented when a three-judge panel voted to halt the policy in Illinois.”

I would love to know where she stands on DACA, travel bans, “birthright citizenship”, etc.

Although Barrett has not ruled directly on abortion as a judge, she has cast votes signaling opposition to rulings that struck down abortion-related restrictions.

In 2016, Indiana passed a law requiring that fetal remains be buried or cremated after an abortion.

After some judges found the law unconstitutional, Barrett voted in favor of rehearing the case. She was outnumbered, but the Supreme Court later reinstated the Indiana law.

In 2019, Barrett voted to rehear a panel's ruling that upheld a challenge to another Republican-backed Indiana abortion law. The Indiana measure would require that parents be notified when a girl under 18 is seeking an abortion even in situations in which she has asked a court to provide consent instead of her parents.

The Supreme Court ordered in July that the case be reconsidered.


These seem to be awfully weak arguments against ACB for the lovers of abortion.

I think Amy may have had federal felony convictions like these (and others) in mind, as not constituting crimes for which 2nd amendment rights should be diminished:

False Statement in Application for Unemployment

There is no perfect application of our 2nd amendment rights. Sometimes what is fair, what is just requires a compromise. It is not unreasonable that we consider the length of prison as a limited time, and still think the commission of a certain crime ranks as qualifying for other restrictions that may still apply after the prison term is completed. Maybe further compromise would serve justice better by making the other restrictions apply only for certain time limits as well, and not permanent. It would probably be added that no other felony occurred during that additional time limit. That would make it like a “probationary” period where the formerly convicted person is demonstrating their abandonment of the behavior that got them into trouble; after which any additional restrictions would no longer apply.