ATHENS, 22 June 2003 — Westerners who rely on the skewed reporting of Fox News or other “fair and balanced” networks, read hysteria-inducing dailies such as “The Sun,” or base their opinions on Hollywood films often end up with an erroneous impression of the Arab world and Arabs themselves. The negatively-indoctrinated might be interested to learn that the Arab world is blessed with qualities fast disappearing in the West — in particular, compassion, a love for humanity and hospitality. It would be nice to back up my assertion with hard facts and statistics but such values are hardly quantifiable. My “evidence” is anecdotal and the only way for Westerners to assess it would be to visit North Africa, the Mideast or the Gulf and judge for themselves.

Most Arabs (and Muslims in general) are always willing to help each other out; their homes are open to guests who will invariably be invited to partake of the family meal. The guest is king in an Arab house and is treated as such. As far as my own experience goes, Britain is at the other end of the spectrum when it comes to hospitality. Firstly, simply dropping in to say hello is frowned upon and even when one is invited there are times when the guest isn’t even offered a cup of tea until the host’s favorite television soap has finished.

On each occasion that my car broke down when I lived in Dubai, several drivers would stop and ask whether I needed help, often rolling up their sleeves to tinker with the engine or change a tire. I recall with a smile the time my dancehall on wheels, a Pontiac Bonneville, was stuck in the sand and 30 or more people got off a passing bus and physically lifted it out of the sand and onto the tarmac. A television advert sums up a similar situation in Britain with a very different outcome.

The ad shows an unhappy young man standing by his vehicle with the bonnet up. A four-wheeled drive comes along filled with his peers who ask: “Want a hand mate?” The owner of the ailing car smiles with relief and says: “Yes please,” whereupon the occupants of the 4-WD shout with glee: “Then call the AA” before driving off.

When my car ran out of petrol in Dubai at the traffic lights, a stern policeman, no doubt thinking “silly woman” pushed it to the side of the road, hailed a taxi and gave the driver Dh5 and an empty mineral water bottle before beckoning me into a nearby shop where he told the astonished shopkeeper to give me a cup of tea. It wasn’t long before I was able to go merrily on my way. Would that happen in London or New York? Doubtful!

Arab kindness runs much deeper than simply offering a meal or changing a tire. Whilst living in Algeria in the 70s, I was involved in a car accident as a passenger. The driver and I were lucky to escape with only cuts and bruises but we were seemingly in the middle of nowhere and our smashed Renault wouldn’t budge an inch. It wasn’t long before we were spotted by the inhabitants of a nearby village and taken to the small mud house of the tribal elder.

I was led to the women’s quarters where the elder’s wife administered to my superficial wounds, plied me with food and drink and delightedly showed off her one-day-old baby girl. In the meantime, her husband drove off to the nearest town, some three hours away, and later returned with a tow-truck and a taxi so that we could return home. Amazingly, although a poor man, he vehemently refused any payment.

Space doesn’t allow me to enumerate each and every act of kindness I’ve encountered courtesy of the Arabs but I must mention the taxi driver in Bahrain who stopped his cab and shouted: “Madame, oh Madame, I’ve been looking for you everywhere. You left your camera in my taxi last year.” I can’t forget the Egyptian cab driver, who drove all the way from Cairo to Alexandria just to return my gold bracelet which had slipped off my wrist and down the side of one of the taxi’s seats or the Qatari woman who took off her own sandals and handed them to me when she realized that I was foolishly walking barefoot on burning hot sand. I have never felt as safe as I did when living in Arab lands, where a visitor is treated with respect and a stranger often behaves like a true and trusted friend.

Due to my own experiences, I am outraged at the way that the Arabs are being painted by sections of the American and British media. The West may have much to teach them when it comes to technology and suffrage but they have so much to teach us poor souls isolated in our lonely towers of consumerism with our televisions and computers for company. If only we knew!

TOPICS: Culture/Society; Editorial; News/Current Events
KEYWORDS: airhead; fatuouscrap; haveyouforgotten Navigation: use the links below to view more comments.
first 1-20, 21 next last
So I guess all those Syrians, Saudis, Yemanis, Somalies, & Pakistanis that are linking up with the remnants of the Ba'ath party are really only trying to help us.
1 posted on 06/21/2003 9:51:00 PM PDT by Pokey78
[ Post Reply | Private Reply | View Replies]
To: Pokey78
It would be nice to back up my assertion with hard facts and statistics but such values are hardly quantifiable.

So your assessments are ... skewed by your wittle emotions. Cute.

It's also interesting that women are allowed to drive in Dubai.

At any rate, iSLAM intends to be the death of America and freedom and every other religion on the planet.

None survive when freedom fails;
Good men rot in filthy jails,
While those who cried “Appease! Appease!”
Are hanged by those they tried to please.


Human civilization had better wake up soon and get as serious about its survival as the seventh-century savages of Islam are about our annihilation!
SLEEPING AMERICANS ARE EASIER TO KILL.
Do not be lulled to sleep by the Religion of Peace defenders.

Sounds like past-tense to me. I wonder why the author isn't still "living in Arab lands" these days?

14 posted on 06/22/2003 5:41:35 AM PDT by Smile-n-Win (The EU will break up any day, but the USA is here to stay!)
[ Post Reply | Private Reply | To 1 | View Replies]
To: Pokey78
The article fails to note that in many glorious Islamic countries, women are not allowed to drive or even be out alone without a male relative chaperon.

The article fails to note that in most glorious Islamic countries, women can be killed by relatives in "honor kililngs" for the simple offense of talking to a man who is not her relative.

The article fails to note that in many glorious Islamic countries, they perform crude surgery on young girls to remove the clitoris - to reduce her pleasure in sex, presumably. Genital mutilation is the more proper term.

The article fails to note that in most glorious Islamic countries, women do not have the right to vote - among a long list of other rights not granted to women.

But hey, other than that, it was fair and balanced?
15 posted on 06/22/2003 7:45:47 AM PDT by scotiamor
[ Post Reply | Private Reply | To 1 | View Replies]
To: Pokey78
Sorry, Ms Heard's warm fuzzy heartstring-tugging tale of Islamic love sounds exaggerated to me. No negative experiences at all? None? Could it be she has an agenda?

Islam is a religion of peace, you see. 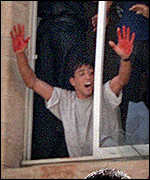