Uday and Qusay killed to keep them silent on lack of WMD? Newsweek’s Eleanor Clift suggested on the McLaughlin Group over the weekend that the in killing Uday and Qusay Hussein, “two intelligence assets who could potentially lead us to the weapons of mass destruction,” the Bush administration “surrendered a major opportunity to uncover” those weapons “unless,” she added nefariously, “they don’t believe those weapons are there.”

Later, she equated President Bush’s State of the Union line about Iraq “seeking” uranium in Africa with the tape erasure in the Nixon White House: “The 16 words are taking on the aura of the 18-minute gap under a former President.”

On the deaths of Saddam Hussein’s sons, Clift argued: “The way they went sent another message. You don’t send in a TOW missile if you want to capture them alive. And these are two intelligence assets who could potentially lead us to the weapons of mass destruction. And the fact that the administration really made very little attempt to take them alive -- they wanted to spare themselves the headache of a trial -- but they also surrendered a major opportunity to uncover the real reason we went to war -- unless they don’t believe those weapons are there.”

In her weekly MSNBC.com column on Friday, Clift offered a less accusatory version of the same theme, arguing that finding the weapons of mass destruction “would be such a huge win for the administration that you would think they would have gone to greater lengths to take Uday and Qusay alive.”

An excerpt from Clift’s July 25 column on MSNBC.com:

....The war in Iraq was fought to disarm Saddam, but the way the commanders on the ground went in after Uday and Qusay shows the administration is not serious about finding weapons of mass destruction. These were the two best intelligence assets, short of Saddam, that the administration could capture. U.S. troops offered them a chance to surrender, and then called in a barrage from helicopter gunships. By killing the brothers, the administration saved itself the headache of a trial but lost the opportunity to prove a link with Al Qaeda or solve the mystery of the missing WMD.

I don’t necessarily quarrel with the decision. Bringing peace and a new order to Iraq would be harder with Saddam’s sons alive. But if the Bush administration really were looking for WMD, these two men were key. It increasingly looks as though the WMD have disappeared. They may be scattered and already in the hands of terrorists. Saddam could have destroyed them before the war, or years earlier, and simply was bluffing to menace his neighbors. Or they could be buried somewhere. Finding them would be such a huge win for the administration that you would think they would have gone to greater lengths to take Uday and Qusay alive....

For Clift’s piece in full: www.msnbc.com

Uh, Eleanor, they had already shot and wounded several of our troops - so the commander sent in a TOW missile because he wanted to keep OUR men alive. What a certifiable idiot.

Surrrrrrrrrrrrrreeeeeeeeeee...Uday & Qusay chose to die rather than giving up the goods about Daddy's WMD. BWAHAHAHAHAHA!!!!!!!!!!!

These guys didn't know poo-squat about WMD, and if they did, would anyone trust them? No, the real information is going to come from the scientists. Seems to me like the brothers were too busy with torturing athletes and hand-washing to know where the weapons might be. 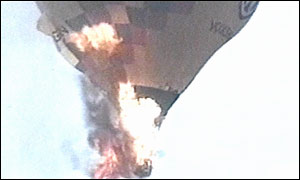 14 posted on 07/28/2003 9:30:47 AM PDT by new cruelty
[ Post Reply | Private Reply | To 1 | View Replies]
To: mgc1122
While I love the Fri nite McLaughlin show, I detest Eleanot Clift. This woman couldn't admit to something against the Dems if her life depended on it. She and others need a down in the ditches trip to most of the countries who are American Haters. No limos, no five star hotels, no extras of any kind. She needs a long session with the women who were raped and sodomized by the crazy Hussein bros to get a dose of reality. What are the chances that somewhere in all the stuff our soldiers have found in Iraq there is tape(s) of the people put into plastic chippers by Hussein? The largest sales of rose-colored glasses has to be to the Dems.
She seems to practice being ignorant...and public television which we all pay for...panders to her and her ilk. she's disgusting.
15 posted on 07/28/2003 9:32:12 AM PDT by ridesthemiles (ridesthemiles)
[ Post Reply | Private Reply | To 4 | View Replies]
To: finnman69
You're way too easy on her.

With that kind of reach this goofball should be playing for the NBA!

I love the smell of desperation in the morning...

By Clift's reasoning, U.S. troops would be forced to capture every Iraqi in every firefight alive in case they turned out to be a Big Fish. U.S. casualty counts would then skyrocket.........and she would then blame Bush.