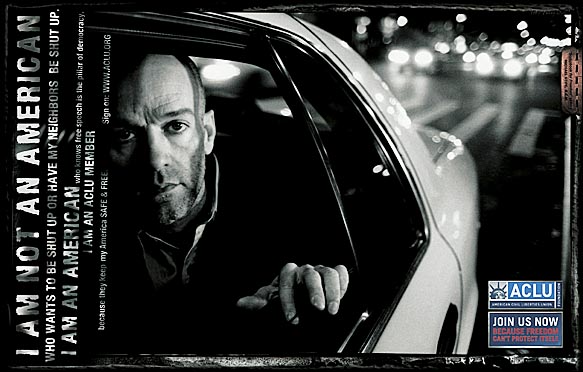 Michael Stipe, the lead singer of the group R.E.M., appears in an ad from the American Civil Liberties
Union that reads, "I am not an American who wants to be shut up or have my neighbors be shut up."

THE second anniversary of the Sept. 11 terrorist attacks passed yesterday and President Bush pressed for greater expansion of law enforcement powers, a new advertising campaign by the American Civil Liberties Union has been rolling out to oppose the tactics and proposals of the White House.

The ads, which indirectly accuse the administration of trampling on the Bill of Rights, without actually mentioning the president, have already hit a nerve.

"It is absolutely outrageous," said Mark Corallo, a spokesman for the Justice Department. "You have men and women who are sworn to uphold the Constitution who are literally putting their lives on the line to keep us safe and our lives intact, and the A.C.L.U. is making them out to be some sort of Gestapo-like organization."

Feelings are bitter on both sides of the debate. Mr. Corallo accused the civil liberties union of trying to create an atmosphere of fear. The A.C.L.U. and its allies said the same about the Justice Department.

"The definition of `crisis' has been changed and been made much more elastic," said Richard Dreyfuss, the actor, who appears in one ad. "Criticism of the administration is not looked upon as allowable or appropriate, because we're in a `crisis.' "

With a budget of $3 million, the campaign is consuming much of the $4.5 million the civil liberties union typically spends on advertising in a year.

Anthony D. Romero, executive director of the group, said the decision to spend so much on one effort reflected a belief that disaffection with the Bush administration and its policies was growing, and that opportunities to gain new support and members were growing along with it.

"It's essential to talk to the American people now," Mr. Romero said, "because there is a beginning of a debate and a dialogue at the grass roots."

As an example, Mr. Romero said that communities around the country have adopted resolutions objecting to the antiterrorism legislation passed in the fall of 2001, known as the Patriot Act. The new proposals would extend those measures and include provisions that were rejected the first time around, like wider powers to issue subpoenas without judicial oversight.

The black-and-white print ads are scheduled to run from September to December in magazines like Rolling Stone and Vanity Fair. They were created by Benenson Janson in Studio City, Calif., the civil liberties union's agency since July 2002.

In the ad featuring Mr. Dreyfuss, the actor looks into the camera next to text that reads, "I am not an American who believes in selective due process," a reference to the government's detention of a number of people since Sept. 11, 2001, without allowing them access to legal counsel, and in some cases without revealing their names or filing charges.

In another ad, Michael Stipe, the lead singer of the group R.E.M., appears under text that reads in part, "I am not an American who wants to be shut up or have my neighbors be shut up."

The large-type legend that starts each ad, "I am not an American," is intended to be provocative. But Howard Benenson, president of Benenson Janson, said that the message that follows was meant to have wide appeal.

"We felt that `I am not an American' plays to the desire for everyone to stand up for their beliefs," Mr. Benenson said.

Other celebrities appearing in the campaign include the author Kurt Vonnegut and the actors Samuel L. Jackson, Al Pacino, Martin Sheen and Kristin Davis, who plays Charlotte on HBO's "Sex and the City."

Mr. Vonnegut said he was a longtime member of the civil liberties union, which decades ago defended a schoolteacher's use of his novel "Slaughterhouse Five" in the classroom.

"What I've said again and again is that if any official from a dogcatcher on up treats you in a way which is clearly unconstitutional, don't call the F.B.I., call the A.C.L.U.," Mr. Vonnegut said.

The use of well-known personalities in the ads is a departure for the civil liberties union. Its campaigns most often urge the public to call members of Congress about a specific bill or issue; less often, the union will buy ad space to try to put a particular issue on the agenda of the news media.

Mr. Benenson said that such a large number and variety of celebrities had volunteered their time and images for the campaign that the civil liberties union has been able to tailor its media plan for maximum effect.

"The celebrities are going to fit the publications," Mr. Benenson said.

For example, the ad with Ms. Davis will run in Vanity Fair, which her fans might be more likely to read than Atlantic Monthly, where Mr. Vonnegut will appear. In Rolling Stone, the singer Sheryl Crow will be featured.

But the strategy has a cost. The campaign's reliance on celebrities has been seized upon by critics, who said that while famous faces may garner attention, they do not inform the debate.

"As far as the celebrities go, they obviously have a right to speak their minds and a right to be morons, and they usually exercise both," said Rich Lowry, the editor of National Review, a conservative journal. "This is typical uninformed hysteria from the two places you expect most to get it: the A.C.L.U. and celebrities."

TOPICS: Constitution/Conservatism; Crime/Corruption; Culture/Society; Extended News; Foreign Affairs; Government; News/Current Events; War on Terror
KEYWORDS: 2ndanniversary; aclu; advertising; idiots; leftistconspirators; rem; saddamhandmaidens; usefulidiots Navigation: use the links below to view more comments.
first 1-20, 21-26 next last
Surprisingly, this was a bit more balanced than I expected. Not a great piece, just more balanced than usual.
1 posted on 09/12/2003 5:44:58 AM PDT by Pharmboy
[ Post Reply | Private Reply | View Replies]
To: Timesink; thefactor
At least they gave Lowry the last quote.
2 posted on 09/12/2003 5:46:13 AM PDT by Pharmboy (Dems lie 'cause they have to...)
[ Post Reply | Private Reply | To 1 | View Replies]
To: Pharmboy
All I can say to Mr. Stipe is feel free to carp, just don't expect me to buy your product.
3 posted on 09/12/2003 5:47:08 AM PDT by mewzilla
[ Post Reply | Private Reply | To 1 | View Replies]
To: Pharmboy
Michael Stipe, the lead singer of the group R.E.M., appears in an ad from the American Civil Liberties Union that reads, "I am not an American who wants to be shut up or have my neighbors be shut up."

There, now we both exercised our speech rights.

To: Pharmboy
Why have they left themselves open to easy slams by starting with "I AM NOT AN AMERICAN..."

Oh, Rich Lowry answered that question - they have a right to be morons.


The ACLU hates the moral base on which America was founded. Thus people like Bush and Ashcroft cause them much more visceral antipathy than people like Larry Flynt or Osama or Yasser.
8 posted on 09/12/2003 5:53:13 AM PDT by maica (Mainstream American)
[ Post Reply | Private Reply | To 1 | View Replies]
To: maica
This whole thing is just a giant ad for "Boycott my Product".
One would think that after Danny Glover was dropped by his employer, the ratings on "West Wing" slipped and the Dixie Chicks were blasted, these nimrods would learn.
9 posted on 09/12/2003 5:57:45 AM PDT by netmilsmom (I survived 9/11--Hugging my babies and thanking God)
[ Post Reply | Private Reply | To 8 | View Replies]
To: Pharmboy
When the general public and private companies tell you to STFU, it's their free speech. The U.S. government hasn't shut anybody up.

YAWNNNNNNNNNNNNNN!!!!!!!!! and the news of the day is????? Nothing new here, the title says it all. Imagine if the headline read - Celebrities Line Up to Criticize Clinton in A.C.L.U. Campaign

There would be an uprising in the dimbocRAT party.

He looks like a bum who needs a shave. Do you ladies find a loser like this attractive? UGH!

Stipe is gay. Or bisexual. Or celibate. Or something. He definitely does not classify himself as heterosexual.

But, if you don't buy his product you are practicing censorship.