THE CONSISTORY: The Protocols (Rocco Palmo steps us through the nitty gritty)
WITL ^ | February 22, 2006 | Rocco Palmo

THE CONSISTORY: The Protocols 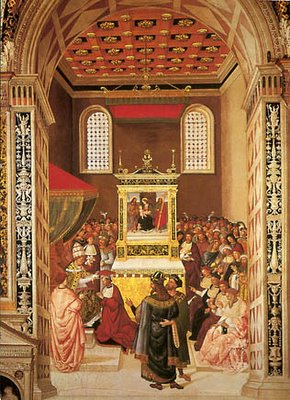 Oh Good God, this'll be a busy day. But I love it -- I got into all this thanks to a consistory many moons ago, so these events mean as much to me as many of you would consider the births of your children.

In testament to this, I do have a (real) scarlet biretta and zucchetto sitting on my bookshelf, currently in my line of sight. (Both were gifts from Eminent friends.)

So as to avoid confusion, and so you can sound smart at cocktail parties and impress your respective audiences, here is the way the next month runs.

What happened this morning was simply the Pope's announcement of intent to elevate the mentioned prelates to the College of Cardinals -- the names given today are not yet "new cardinals." For obvious reasons, this is done so that the requisite logistical arrangements can be made without fear of indiscretion. The designates were notified of their selections by phone within the last three days.

Even now, though, nothing is set in stone, and Benedict XVI may add to or change the list if he so chooses.

This happened in 2001. On 21 January of that year, John Paul announced his intent to create 37 cardinals a month later, and everyone thought that was it. But given the election of Lubomyr Husar as major-archbishop of Lviv on 26 January, the late Pope then returned to The Window on the following Sunday and announced that Husar would receive the red hat, and six others alongside him (Karl Lehmann among them), bringing the grand total for the 2001 Cardinals' Class to a mind-blowing record of 44. Remember well that, as recently as a decade earlier, the triennial number was half that, and Joseph Ratzinger himself was one of a class of just four cardinals created in 1977 -- the gathering known famously as the "Benelli consistory" because of the man for whom it was held, the daddy of those famous widows (three of whom eventually became cardinals in their own right).

From today, the honorees may -- in fact, should -- be known as "cardinal-designate" (cardinals are not elected), but everything else waits -- no "Eminence," no reds, none of that -- until the consistory itself. (Gammarelli's strictly-enforced custom is that, aside from the people doing the fittings and the cardinal-designate's secretary, but no one is to see the Eminence-to-be in his new robes until he walks out for the ceremony at which he receives the red hat. Period.)

Even in the world of the Vatican, the title "cardinal-designate" is verboten; until the day the biretta is conferred and the names published in consistory, those chosen remain referred to in the episcopal style of "S.E. Mons," with no indicator of their coming status. And if, God forbid, the Pope died before the consistory were held, the designates would not be permitted to enter a conclave and vote as they have not of yet been created and published. Their appointments would effectively die along with the Pope who announced his intentions, and it would be up to a new pontiff whether the wishes of his predecessor would be honored or not.

The Consistory proper, to be held on 24 March, takes place within the context of the Liturgy of the Word, the Pope and all prelates in choir dress. (The cardinals-designate arrive bareheaded and are seated before the papal chair; the existing members of the College sit to the Pope's side.) It features two papal speeches: an exhortation to the new cardinals, and the homily for the worldwide audience.

In times past, there were several consistories for a new incardination of the Roman clergy's honorary, and most prominent, members. First, a secret consistory (in the presence of the existing College) would be held at which the Pope would publish the list of his nominees, conferring on them the style "Eminence" and the right to vote in a conclave. Cardinals-designate resident in Rome would be "notified" of their selection in a ceremony at their proper residences and handed the biglietto, or "ticket," of their nomination. They would then proceed to the semi-public consistory, held in the Papal Apartment, at which they would be given the biretta, followed by the public consistory, usually in the Sistine Chapel, at which the galero -- now abolished as an active item of vesture -- would be conferred. (One cardinal who didn't receive the galero in the 1960s was so infuriated as to tear down his predecessors' hats from his Cathedral ceiling. No lie.)

Since 1988, there has been but one ceremony, and the names have been created and published in a single public consistory. The designees are vested with the zucchetto and biretta toward the end of the rite, after which they greet the entire College individually and then take their places alongside them.

Is that what it's called? Thanks! There are several of these hanging in St. Patrick's Cathedral. (Of course they're a tad dusty :-). 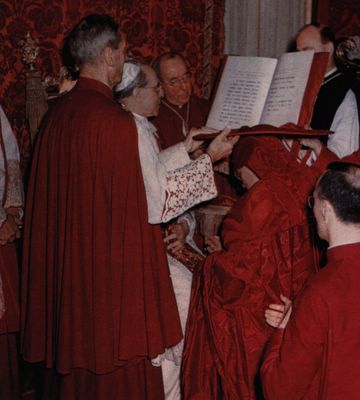 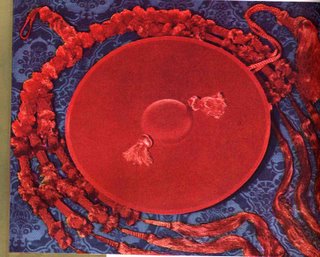 Is that a red hood he's wearing in the first photo?

I think it is part of the galero. There is a picture of a Ukrainian cardinal on the page I linked to, a little farther down from the second photo, that leads me to conclude so.

The gentleman above is Cardinal-designate Carlo Caffara of Bologna.

A former consultor to the CDF, Caffara is a well-known moral theologian in Italy and the founder of the John Paul II Institutes for Marriage and the Family -- there are two here in the States, one in Washington and the other in Steubenville.

Caffara, shown here at his reception as archbishop of Bologna in early 2004, is wearing the taborro -- the colored winter double-cloak formerly conceded to prelates.

Technically, it's been banned... but since when did that ever stop ostentation in this business?

I think we ought to bring back all the fun stuff -- the sedan chair, the tiara, etc. etc. The Papacy has survived most of the world's princes . . .

Note also that there is supposed to be a day of reflection for the new cardinals (and others?) on 23 March. I thought that was the day of the second round of meetings on the SSPX question, etc. Wonder if it is still on for then.

"ostentation" was Rocco's choice of word(s). Benedict XVI has already brought back some of "the fun stuff" - the (velvet) camauro and mozzetta. However, he has also gotten rid of some traditional stuff as well - the tiara, both in the coat of arms and in the "coronation" ceremony.

14 posted on 02/22/2006 12:35:43 PM PST by ELS (Vivat Benedictus XVI!)
[ Post Reply | Private Reply | To 12 | View Replies]
To: ELS
The Tiara and the coronation both died with the pontificate of John Paul I+ who scandalously (at the time) refused them. In many respects it could be argued that it died well before then, since Paul VI+ had declined to wear the Tiara from around the time the council ended. The Sedia Gestatoria died with John Paul II+. One of the few times he ever publicly scolded someone was when a spectator at one of his public audiences in St. Peter's Square shouted "we want you on the sedia!" John Paul's face took on a grave expression and he wagged his finger at the man and said "NO! Never the Sedia Gestatoria!" All Benedict+ has done is to remove the Tiara from the coat of arms. In general I think Benedict+ has brought back a lot of the traditions of the papacy.
15 posted on 02/22/2006 11:59:19 PM PST by jecIIny (You faithful, let us pray for the Catechumens! Lord Have Mercy)
[ Post Reply | Private Reply | To 14 | View Replies]
To: NYer
Caffara, shown here at his reception as archbishop of Bologna in early 2004, is wearing the taborro -- the colored winter double-cloak formerly conceded to prelates.

Technically, it's been banned... but since when did that ever stop ostentation in this business?

What exactly has been banned? The double cloaks are worn by the priests at my parish