Former Scientologist and King of Queens star Leah Remini said she has found â€œamazingâ€ comfort in returning to the Catholic Church after leaving Scientology two years ago, contrasting Scientologyâ€™s abusive policies with Christianity.

During an interview with Howard Stern Tuesday morning, the 45-year-old actress said she was so happy to be â€œreconnectingâ€ to the faith of her childhood.

Initially, Stern tried to lump all religions together as equally fanatical, but Remini jumped in, telling the shock jock he was making a big mistake.

â€œIâ€™ve come to the conclusion in my life that all religions are sorta nutty,â€ Stern said. â€œAnd, you know, I just donâ€™t get it sometimes, and so I donâ€™t even single Scientology out any differently than Christianity or Judaism.â€

â€œBut you should,â€ cut in Remini, referencing Scientology abuses such as heavy commitments in finances and time, as well as its policies that break up families and friendships.

Remini said that it was a joy to get back to the faith in which she grew up.

â€œMy grandmother lived on Elizabeth Street in Little Italy, and she used to go to church every day,â€ Remini told Stern. â€œSheâ€™d go in, light a candle, sheâ€™d pray, and as a child, that was comforting to me.â€

â€œSheâ€™d go pray and do the sign of the cross on her forehead. Sheâ€™d pray to this one and pray to that one if she lost her keys. It was always very comforting to me to have faith in something.â€

â€œIt wasnâ€™t pushed on me like it was pushed on you,â€ she told Stern.

Remini said being back in the Catholic Church has been an â€œamazingâ€ comfort to her.

â€œNow that Iâ€™m older and out of the Church [of Scientology], Iâ€™m reconnecting to a faith where I can go in and light a candle,â€ she said.Â â€œI have always been spiritual.â€ 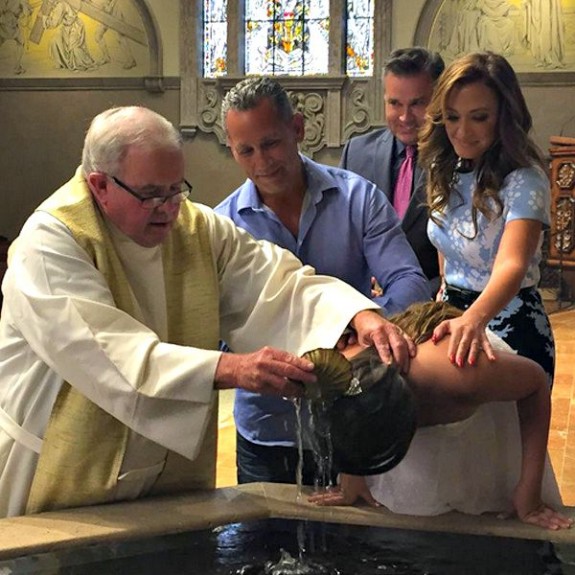 I saw Leah on 20/20 and her experience with those evil freaks in the Scientology cult left me wondering why the FBI & DOJ don’t go after Scientology with at least the same zeal that they pursue the Tea Party.

Scientology is considered a cult in Germany and is banned. Something tells me that Washington DC is getting paid.

I am sure that you being the only Christian on Earth makes Jesus proud.

Maybe Leah could give Greta a call.

Because of the 1st amendment. Churches can get away with things nobody else can.

And faith without works is dead!

Yup. Scientology made massive contributions to Team Clinton in the `90s-as did their wealthy celebrity members. In exchange, the Clinton Treasury Department granted Scientology 501(C)(3) tax exempt status as a religious organization.

Glad to see she got out of that and her family with her.

Council of Trent:
"If anyone says that man can be justified before God by his own works, whether done by his own natural powers or by the teaching of the Law, without divine grace through Jesus Christ, let him be anathema" (Session 6; can. 1).

Yet at the same time, we are speaking, as the Bible does, of a living faith: James 2:17 reiterates, in harmony with all the OT prophets and NT evengelists, that "faith of itself, if it does not have work, is dead." In verse 24 James says, "See how a person is justified by works and not by faith alone." And later: "For just as a body without a spirit is dead, so also faith without works is dead" (2:26).

Thus we are saved by a living faith, by grace, by Our Lord Jesus Christ. But a person who would refuse to obey Jesus' commands and carry out the work of the Gospel, cannot be said to have this living faith.

The love of Christ impels us to good works, and as as St. Paul, the great Apostle of Faith, tells us, "If I have a faith that can move mountains, but do not have love, I am nothing." - 1 Cor 13:2)

So-called "works righteousness", however, was the doctrine of Pelagianism, which was condemned at the Council of Carthage in A.D. 418.

Faith is expressed through works. Even faith itself is a kind of work, an inner work. What Protestants originally rejected were barbarisms like selling indulgences, and people forgetting that all work is fueled by grace - no one does anything on their own.

Scientology™ lost its tax-exempt status in 1967 after an audit. This led the cult to infiltrate numerous government organizations and steal files relating to them. They also filed tons of lawsuits to pressure the IRS into reinstating their tax exemption.

Which they did, in 1993. However, how that came about is a big secret. Someone had something on someone, I imagine.

Question: Why does the Roman Catholic Church teach the doctrine of “works righteousness,” that through good works one can earn salvation?

Answer: The Catholic Church has never taught such a doctrine and, in fact, has constantly condemned the notion that men can earn or merit salvation. Catholic soteriology (salvation theology) is rooted in apostolic Tradition and Scripture and says that it is only by God’s grace—completely unmerited by works—that one is saved.

The Church teaches that it’s God’s grace from beginning to end which justifies, sanctifies, and saves us. As Paul explains in Philippians 2:13, “God is the one, who, for his good purpose, works in you both to desire and to work.”

Notice that Paul’s words presuppose that the faithful Christian is not just desiring to be righteous, but is actively working toward it. This is the second half of the justification equation, and Protestants either miss or ignore it.

James 2:17 reminds us that “faith of itself, if it does not have work, is dead.” In verse 24 James says, “See how a person is justified by works and not by faith alone.” And later: “For just as a body without a spirit is dead, so also faith without works is dead” (2:26).

The Council of Trent harmonizes the necessity of grace and works: “If anyone says that man can be justified before God by his own works, whether done by his own natural powers or by the teaching of the Law, without divine grace through Jesus Christ, let him be anathema” (Session 6; can. 1).

The Council fathers continued by saying, “If anyone says that the sinner is justified by faith alone, meaning that nothing else is required to cooperate in order to obtain the grace of justification and that it is not in any way necessary that he be prepared and disposed by the action of his own will, let him be anathema” (Session 6: can. 9).

By the way, “let him be anathema” means “let him be excommunicated,” not “let him be cursed to hell.” The phrase was used in conciliar documents in a technical, theological sense, not in the same sense as the word “anathema” is found in Scripture. Don’t let “Bible Christians” throw you for a loop on this one.

So, far from teaching a doctrine of “works righteousness” (that would be Pelagianism, which was condemned at the Council of Carthage in A.D. 418), the Catholic Church teaches the true, biblical doctrine of justification.

Scientology is a weird cult. May this dear soul also place her faith entirely in the gift of Christ and not her own works, that she may have eternal life.

Actually, outside the Catholic Church, there is nothing else to choose from except heretical nonsense. Christ taught ONE truth.

That said, Howard Stern should be hung, drawn, and quartered. This piece of vile filth should have no place in any culture, much less in America. Unfortunately, that he was risen to so much prominence is itself a reflection of our rancid culture that allows for the election of the Obamas and Clintons.