Diocese of Madison: Tabernacles must be moved to center of sanctuaries
WDTPRS ^ | December 24, 2015 | Fr. John Zuhlsdorf

For your Brick By Brick file.

More great news from the Extraordinary Ordinary of Madison, His Excellency Most Reverend Robert C Morlino.

This comes by way of the liberal (for Madison a tautology), secular newspaper the WSJ. My emphases and comments.

ASHTON -- Like centuries of Catholic priests before him, the Rev. Tait Schroeder consecrated the communion bread at a midday Mass last week, turning it into what the denomination's faithful believe is the actual body of Jesus Christ.

After offering the sacramental bread -- referred to as the Eucharistic host -- to parishioners, Schroeder walked the unused portion to an ornate, safe-like box behind him at the front of the sanctuary.

In this secure shrine, called a tabernacle, the host would dwell until needed for the next Mass, available all the while for the faithful to pray before it or for Schroeder to take it to home-bound parishioners.

As Christians around the world mark the birth of Christ in Bethlehem this Christmas season, many Madison-area Catholics are learning more about the profound role of the tabernacle in their parishes. [Itâ€™s true, but it is amazing to have to read a sentence like that.] Madison Catholic Bishop Robert Morlino has directed priests to move the tabernacle to a prominent spot at the center of the sanctuary at all diocesan churches. [Do I hear an â€œAmen!â€?]

The directive was announced at an annual gathering of priests in September and could affect about half of the 134 worship sites in the diocese, although no exact count is available, said Patrick Gorman, director of the diocesan office of worship, which coordinates liturgical matters for the bishop and will be leading the effort. At these churches, the tabernacle may be off to one side of the sanctuary or in a separate side chapel altogether.

Because church law requires that a tabernacle be immovable and made of solid material, the directive will require some cost and effort at some parishes, Gorman said. The bishop is giving priests three years to accomplish the goal, until October 2018. [I would have given 3 months, butâ€¦ hey! He has the 10K foot view.]

Gorman said the bishop's intent is to place more emphasis and reverence on the Lord's presence at the Eucharist, the term used by Roman Catholics for communion.

"This isn't just another piece of furniture in the sanctuary," Gorman said. "It is housing the living God."

Morlino had been moving in this direction for a decade or more, encouraging priests in general to relocate tabernacles and requiring it during parish renovation projects, Gorman said.

St. Peter Catholic Church, where Schroeder is priest, is an example of what Morlino considers an ideal placement of a tabernacle, according to the diocese. The neo-gothic church, constructed in 1901, is in Ashton, an unincorporated Dane County community northwest of Middleton.

The tabernacle is at the central axis of the church, right behind the communion table and part of a soaring, decorative high altar that includes an array of statues and religious iconography.

"It really is the focal point," Schroeder said of the tabernacle. "It draws our hearts and minds to Christ and to our belief that he is really present with us."

Schroeder said the tabernacle at St. Peter had moved around some over the decades, residing for a time off to the side of the sanctuary. His predecessor moved it back to its current, original spot.

Read the rest there.

You might be surprised that the piece does not include the usual naysayers with a contradictory message. Then there is the horrid combox. 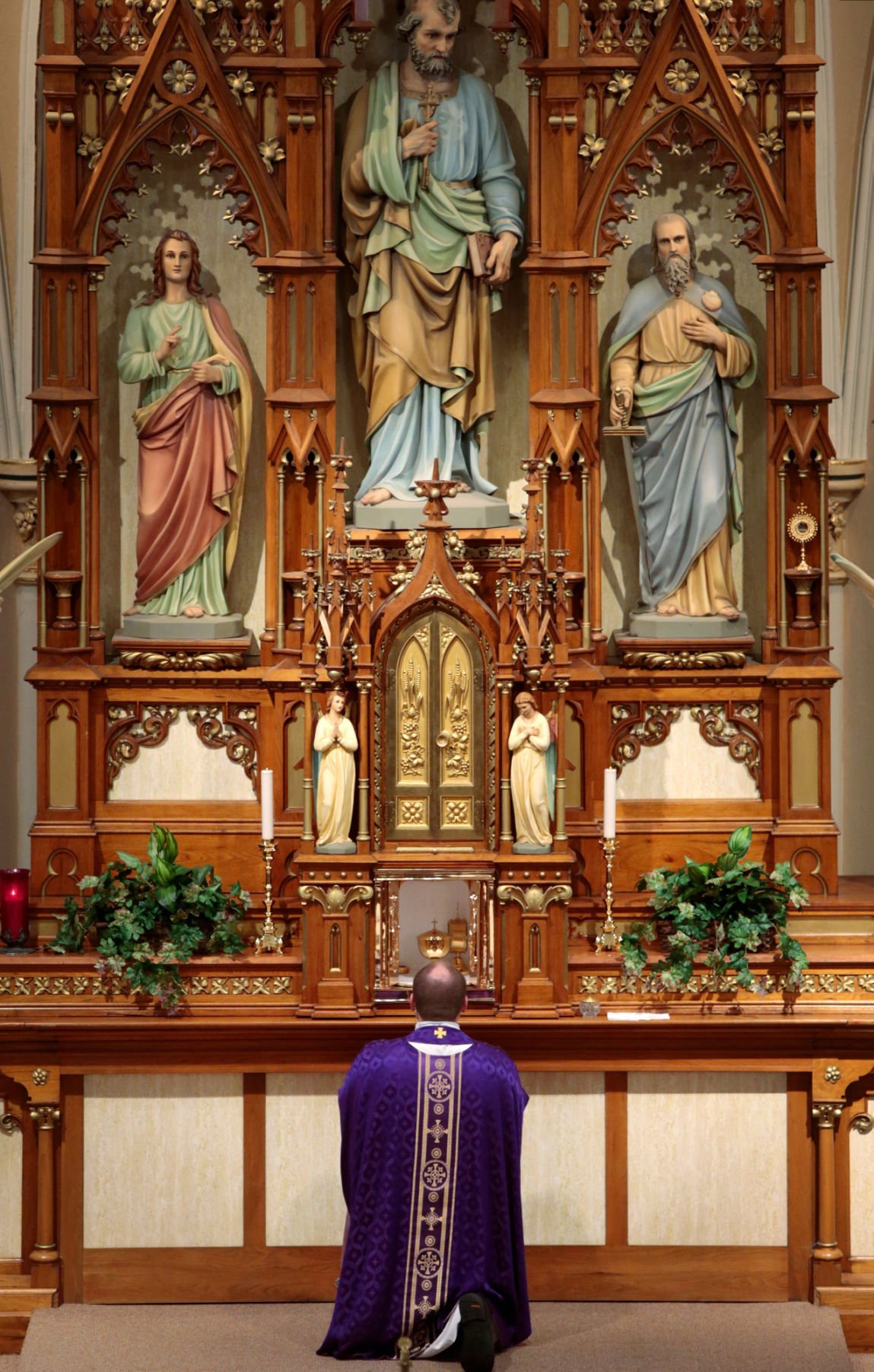 The Tabneracle should NEVER have been moved! It IS His house, after all! Why priests have moved the Tabernacle in the 1st place and now have to be “encouraged” to put it back to the center of the altar is an outrage.

Our new pastor made this change about 2 years ago. Previously the tabernacle had been near the busiest entry door. Most folks walked right by without noticing it.

I love the new arrangement. We have offering candles and statues of Mary and Joseph in the spot where the tabernacle had been.

Jesus returning to the center-stage position that he occupied before VATII?

The last Parish we went to had it way in the back.

Hooray! Where it should be. Christ is the center of the Mass.

In a hundred years most Catholic leaders will be pretending that Vatican II and its disastrous aftermath never happened.

It took me a long while, but I finally figured out that Calvin was more Catholic than many liberal priests in our time.

I hope by that time they are no longer teaching the historical-critical method of interpreting scripture in the seminaries. Those who do have no belief in the supernatural

Bush is not competing to win primary votes or delegates. He is competing to maintain his position as the anointed of the RNC.He faces the ignominy of becoming too embarrassing to the GOPe, maybe even to the Bush family who might just accede to a Rubio nomination rather than the brother with the nose problem.

When my parish built a church back in 97-99 the pressure was still on to hide the tabernacle off to the side or in the sacristy even, we built it into the wall behind the altar where it is plainly visible. At St. Johns across town they had a traditional tabernacle that was movable and with the changing directives from the diocese it got moved around several times. When they built their own new church they liked the idea of putting it in the wall. Now it, too, is secure from the whims of fashion.