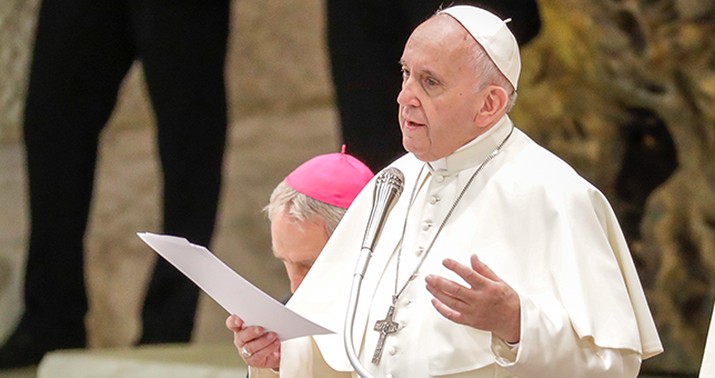 Will the Catholic Church dispense with celibacy in order to deal with a critical shortage of priests? In a synod addressing the crisis of access in the Amazon, bishops recommended ordaining married deacons as priests — in that region only, for now. Critics worry that this will lead to an end of a thousand-year practice of priestly celibacy in the Latin Rite:

Roman Catholic bishops from across the Amazon recommended Saturday to allow married deacons to become priests — a proposal intended to address a severe shortage in the region, but also one that breaks from centuries of church tradition.

The document by the Vatican gathering — which needs to be affirmed by Pope Francis — offers a significant shift in church views and could potentially signal a new strategy to modernize key tenets of Catholic tradition, such as priestly celibacy, as the church faces a worldwide decline in vocations.

“Modernize” is a curious word in this case. It’s true that priestly celibacy has been a discipline in the Latin Rite for a thousand years, but this “modernization” would actually revert the church back to a more ancient practice, albeit one that was not necessarily universal even in its time. It’s also a curious word to use in an era that has tried to redefine and even discount marriage, when the news is instead filled with news of “throuples” and polyamory.

At any rate, the document may not have been as broad as the Washington Post believes. Crux’s Inés St. Martín and Christopher White report that the recommendation was narrow, specific to the Amazon, and not necessarily a full endorsement of a change in discipline:

Catholic communities in the Amazon might be able to ordain married men to the priesthood under limited circumstances, based on the outcome of a meeting of bishops in Rome that issued its final report Saturday – although the document stopped short of a full-throated endorsement for the ordination of either married men or women deacons.

The Vatican’s Synod of Bishops on the Amazon neared its conclusion on Saturday evening, with a majority of the 184 bishops and other clergy voting to approve each paragraph of the final 30-page document, “Amazonia: New Ways for the Church and for an Integral Ecology,” which offers a narrow opening to ordain married men in remote areas of the 9-country region, although the proposed language limits the ordination to men who are already deacons.

It’s a long way from that narrow opening to ending the celibacy discipline for all priests in the Latin Rite — at least for now. The Amazon has become an area of intense focus for the Vatican, as the Post does do a pretty good of reporting, because of a vortex of trends that threaten the Catholic Church’s standing in South America and this region in particular. A lack of vocational recruitment has left the church with a profound shortage of priests, such that many communities might only see a priest once a year. That leaves a critical gap for access to the Eucharist and reconciliation, two sacraments which deacons cannot minister. At the same time, the Catholic Church is losing ground in South America to evangelicals for a number of reasons, with the priest shortage among them but not necessarily the predominant issue.

Critics contend that these same circumstances can be found in many places, with perhaps only Africa producing a surplus of priests. What constitutes a crisis severe enough to dispense with a discipline, especially of priestly celibacy? One priest visit in a year? In six months? In a month? The latter might apply to places in the US at times, as well as other Western countries.

Bear in mind that priestly celibacy is not a doctrinal point in the Catholic Church, but is only a discipline or practice. It can be changed by the pope and bishops, and has been, although the last time it was changed was a millennium ago. Such a change would still have a massive impact on the Catholic Church, and not all of it “modernizing.” One practical consideration is the difficulty in supporting a family life, as priests typically work 60-80 hours a week or more. Another would be the potential for undermining the morale of the priests now ordained under celibacy, who committed to the position and surrendered family life as a sacrifice.

That may be why the proposal was among the least popular in the synod document among the bishops. The Wall Street Journal’s Francis X. Rocca reports that the celibacy waiver and a proposal to study the ordination of women as deacons passed, but with lower vote counts on other practical solutions for issues in the Amazon:

The question of married priests was the most controversial on the agenda of the three-week synod. Critics of the proposal argued that it would undermine the distinctive character of the priesthood and that such a large change shouldn’t be decided at an assembly for a single region, since it would potentially affect the whole church. Bishops in Germany are already planning to discuss celibacy at a series of meetings with lay Catholics beginning in January.

The proposals on celibacy and women deacons were the least popular with the assembly of the 120 recommendations presented to the pope, including many on the Amazon’s environmental problems and the challenges of ministering there. But both proposals passed the voting threshold of two-thirds of the 181 members eligible to vote. One hundred and twenty eight members voted for married priests, with 41 opposed. One hundred and thirty seven voted for the study of women deacons, with 30 opposed. …

The final decision on the proposal lies with the pope, who told bishops on Saturday evening that he hoped to respond to the synod’s reactions in a papal teaching document by the end of the year. He didn’t specifically refer to the proposal for married priests. In the past, he has said that he is open to the possibility in areas such as the Amazon or remote Pacific islands.

It’s certainly possible to limit the loosening of this discipline to those areas, but for how long? And for what purpose? As recruitment for vocations continues to struggle, that precedent will wear on other bishop’s conferences and put pressure on them to ask for their own exceptions. The existence and success of married Anglican-convert priests has already put this practice under question. This will eventually lead to a more basic question as to whether celibacy delivers enough value to priests to outweigh the lack of candidates who are willing to sacrifice a family life for the priesthood, countered by the financial and pastoral impacts of having married priests as a norm will create.

If nothing else, it’s certainly a change of pace to see the world so enamored of traditional marriage. Maybe we should have these synods every year.

TOPICS: Catholic; Religion & Culture
KEYWORDS: amazon; celibacy; priests Navigation: use the links below to view more comments.
first 1-20, 21-36 next last
1 posted on 10/28/2019 8:21:10 AM PDT by SeekAndFind
[ Post Reply | Private Reply | View Replies]
To: SeekAndFind
One practical consideration is the difficulty in supporting a family life, as priests typically work 60-80 hours a week or more.

Feh. I did that holding a series of crappy jobs to support a wife and two young children. Everything worked out okay.

2 posted on 10/28/2019 8:30:52 AM PDT by Buckeye McFrog (Patrick Henry would have been an anti-vaxxer)
[ Post Reply | Private Reply | To 1 | View Replies]
To: Buckeye McFrog
Feh. I did that holding a series of crappy jobs to support a wife and two young children. Everything worked out okay.

A midwestern German Catholic priest marrying a youngish midwestern Irish woman can be good for twelve children. Even if the money is there, the children deserve more attention than a man with a priestly calling can give. Regarding marriage in general, I sometimes like to point out that "No man can serve two masters."
3 posted on 10/28/2019 8:43:11 AM PDT by Dr. Sivana (Sutor, ne ultra crepidam--Appelles of Kos)
[ Post Reply | Private Reply | To 2 | View Replies]
To: SeekAndFind

Many years ago, a married Protestant minister told me he also led Mass for local Catholics. He said there were no Catholic priests serving that area. Maybe I misunderstood what he said... ?

People used to father 10-12 children all the time back in the day. Putting in 12 hour days in mills, factories and coal mines. My grandparents both came from such families. Again, things for them worked out okay.

5 posted on 10/28/2019 9:14:09 AM PDT by Buckeye McFrog (Patrick Henry would have been an anti-vaxxer)
[ Post Reply | Private Reply | To 3 | View Replies]
To: Tired of Taxes
A Protestant minister cannot celebrate the Holy Sacrifice of the Mass. Period.

You might have misheard. Possibly he was an ex-Protestant minister who had subsequently been ordained a Catholic Priest.

I agree it used to work out -— for some -—in your grandparents’ era. But “back in the day” (and I mean way back, 50’s-60’s AD) St. Paul said it tended to tear a man apart, trying to be all-out working for the Church and yet keeping his wife and family cared-for and content.

The Catholic Church should allow married priests. Nothing about ministerial duties mandated to be celibate is Biblical.

St. Paul said Deacons should be husbands, and he said d it’s better to marry than burn with lust.

They should allow married priests.

The flipside of that is, as my father used to observe, that in Protestant denominations where the pastors may marry the church ends up gaining a HUGE amount of free labor from the pastor’s wife.

I have friends whose kids are ministers and this is undeniably true.

Protestant clergy who are already married can also come into the priesthood under certain conditions.

It’s simply the tradition of the Latin Rite to be celibate and is looked upon as an honor to Jesus Christ.

If there is married priests,the rule have to be like that for the Eastern Rites.

All that is done is going back to the Biblical roots.

Even Christ a bride. The Church.

Correction: Even Christ has a bride. The Church.

Yet the first Pope, St. Peter had a wife,remember Jesus healed his MIL.

Plus the Latin Rite has already has married clergy called permanent deacons.

Then answered Peter and said unto him,

"Behold, we have forsaken all
and followed thee; what shall we have therefore?
And Jesus said unto them...
Every one that hath forsaken houses, or brethren, sisters,
or father, or mother,
or wife, or children, or lands,
for my name's sake,
shall receive an hundredfold,
and shall inherit everlasting life."

It seems the Apostles had all forsaken ("we have forsaken") the ordinary rights and joys and obligations of marriage and family life, and were willing to sacrifice everything in order to follow Jesus.

It was an eschatological sign: that they were living sacrificially, not for the ordinary satisfactions of this life, but for the everlasting life to come.

“No man can serve two masters.”

And if a woman is allowed in the priest’s house it will be no time at all until you see women behind the pulpit, women handling the Host, a feminized pope...Oh, wait.

Well we will know for certain if the first Pope was either married or a widower when after we go home.