Plenty of buzz about this last night, especially among anti-Trumpers struck by the coincidence of Trump superfan Newt criticizing him publicly on the same day that an even bigger superfan, Ann Coulter, called Trump “mental” in an interview. (Matt Drudge, yet another superfan, is leading as I write this with the news of Trump’s campaign manager being arrested for battery.) Are Trump’s cheerleaders heading for the lifeboats because they know something we don’t?

Nah. They’re still onboard, they’re just alarmed that the captain won’t steer away from that iceberg that keeps getting closer. Trump’s fans within the commentariat have, I think, convinced themselves that his boorishness is strategic, something he can turn on and off at will to command the media. It’s served him well but now, facing a de facto head to head race with Cruz, he should be sealing the deal by shifting to a more low-key “presidential” approach. Reassure Republican undecideds in the remaining primaries that you’re up to the job. Impress delegates at the convention that you won’t be a loose cannon as nominee. Attract swing voters in the general election by demonstrating that the vulgar, street-fighting Trump of the primaries was a persona adopted for electoral advantage, one that will be discarded to defeat a new opponent in Hillary Clinton. I think it’s dawning on Newt (and Coulter in the other clip) that maybe the boorishness isn’t strategic. Maybe it’s who Trump is. Maybe he can’t resist attacking Heidi Cruz, no matter how obviously stupid that is, because he’s spent his life being rewarded for boorish aggressiveness that supposedly proves his alpha-male dominance. What you’re seeing, in other words, is Gingrich contemplating possibly for the first time that Trump’s campaign really might turn into a dumpster fire in November because he’s too indisciplined and too much of an egomaniac to fiddle with a dangerous approach that’s worked for him in other contexts. Ben Domenech’s got it right:

At exactly the moment Trump ought to be transforming himself into a unifying figure, he is ensuring that is all the more difficult by stooping to baseless personal attacks and driving down his numbers among Republican women and social conservatives. In failing to recognize the importance of delegates and in engaging in these unnecessary personal attacks, Trump decreases his potential to win the nomination on the first ballot. If Trump is actually beaten because of these decisions it shows he’s not ready to lead a party anyway…

Coulter is a lot of things, but she’s no dummy. She understands that by politicizing Heidi Cruz’s depression and her appearance, Trump is hurting his ability to ever receive the support of a growing portion of Republican women, particularly social conservatives and evangelicals.

Until very recently, Cruz said repeatedly that he’d honor his pledge this fall to support the GOP nominee. Lately he’s stopped because, uh, how could he not when Trump’s taking shots at his wife? That’s a microcosm of how a presumptive nominee is throwing away support he desperately needs to win in November. Why can’t Trump lay off when even his own fans are telling him he’s making a mistake? David Brooks has a theory:

Trump’s misogyny, on the other hand, has a commercial flavor. The central arena of life is male competition. Women are objects men use to win points in that competition. The purpose of a woman’s body is to reflect status on a man. One way to emasculate a rival man is to insult or conquer his woman…

It’s not quite right to say that Trump is a throwback to midcentury sexism. At least in those days negative behavior toward women and family members was restrained by the chivalry code. Political candidates didn’t go attacking their rivals’ wives based on their looks. Trump’s objectification is uncontrolled. It’s pure ego competition with a pornogrified flavor.

In this way, Trump represents the spread of something brutal. He takes economic anxiety and turns it into sexual hostility. He effectively tells men: You may be struggling, but at least you’re better than women, Mexicans and Muslims.

And he’ll take that credo into battle against the would-be first woman president. The question unasked of Newt and Coulter is why they didn’t expect Trump to eventually take a cheap shot at Cruz’s wife given the sort of attitude Brooks describes, which Trump has harbored for decades. Why is there a note of frustration in backing (or all but backing, in Newt’s case) a guy who’s had this priced into his stock all along? It’s like watching a Cruz fan get exasperated that he keeps talking about faith and religious liberty. That’s who he is; if you don’t like it, you’re backing the wrong candidate. And it’s a lead-pipe cinch that this is who Trump will continue to be: If he’s the nominee, the odds that he won’t eventually attack Hillary Clinton in some sexist manner during the general election campaign are basically zero. Obama famously said in one of his books that the Hopenchange phenomenon was due in part to his fans projecting their own personal ideals onto him, as a blank slate. But there’s a weird, surprising element of that too with Trump, who should be the opposite of a blank slate after 40 years in the public eye. He is who he is, which is who he’s always been, yet here are Newt and Ann discovering nine months into his campaign that the nasty attacks on Twitter aren’t just some media kabuki he’s performing to dominate the morning chat shows and impress his savvier acolytes within the political class. It just may be that he really is temperamentally unfit for office.

I guess Newt changed his mind about that possible Trump endorsement.

Newt has always been part of the Establishment no matter how right he is in his thinking and doing, he is still part of them.

Or, maybe he’s just saying what he believes.

Self-proclaimed conservative Newt Gingrich could be the next Republican candidate for President, but with his unconstitutional track record, will he be right for America?

I don’t think this is a turn on Trump... its a pretty honest analysis. Trump’s response over the attack on his wife was silly, and probably poorly advised.

It is amazing that if someone offers their honest assessment of something, but it doesn’t go along with a perceived narrative that must mean they are now for or against something.

Brooklyn boys hit back when hit, just their nature. Besides, Gingrich lost me when he sat on the couch with Pelosi yammering about Global warming in an ad.

I like Newt but strongly disagree with him on this.

Amen to that. And twice as hard.

Didn’t read the article but on those two tweets he is correct. Just a mistake.

He had to respond, and all he said was “spill the beans on Heidi.” And for all we know, there may be beans we haven’t floated to the surface.

The Melania photo was likely purchased months ago and was being saved for the ‘ripe moment.’

The Cruz Mistress Crises -#theThing was heavily rumored to be released. So Cruz’s team sent out the Trump photo as a preemptive strike to soften the blowback for Cruz. The bonus was mocking the outrage and being able to blame Trump for retaliatory treatment.

And, there’s proof on the celebrity gossip blogs. The first challenge to find a cheating POTUS candidate was in August 2015. It was supposed to be with a journalist. Another challenge was issued (but reworded more specific) in December 2015. Hundreds of comments or tips were sent in to their sleuths. And POTUS was solved to be Cruz 12/15, BTW. Only difference is the mistress was supposed to be a lobbyist. So maybe there’s another guy, yet to be outed. Or maybe a mistress yet to be uncovered.

Team Cruz likely received a 48 hour notice from the Enquirer. That is how they dealt with Sarah Palin’s daughter and Levi Johnson. They informed both families and Sarah was forced to disclose Bristol’s condition. But they did give her the courtesy of the “heads-up.”

LOL, and I know that even though I am not a Brooklyn boy. Their reputation precedes them. Actually only went to New York City twice in my life. Too many people for my liking.

So, I guess Trump is just supposed to sit back and allow the slime ball Cruz to post copyrighted pictures of his wife without standing up for her. What a bunch of weak, girly men we have in this country.

Well, no. No he didn’t. Not like that. Maybe it’s just me, but responding like that meant knowingly dragging out a long and very ugly distraction ... Nero is fiddling.

"I find it hilarious that SarahPAC is sending me emails invoking Ted Cruz as a reason to donate to it." 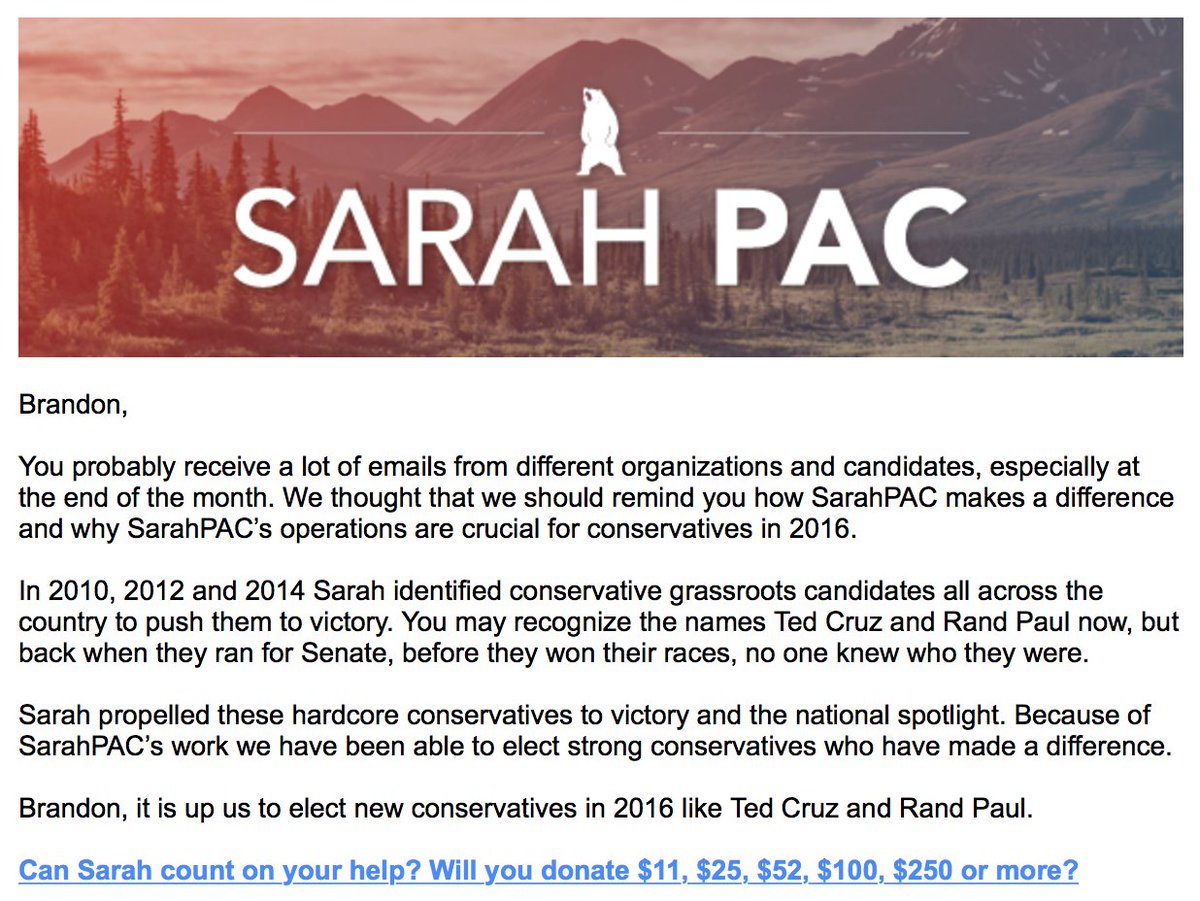 I have never seen anyone work harder then you do to get hillary elected. When this is all over, I’ll make sure that is never forgotten.

It seems he’s just saying he thinks it was a bad idea to do that.

I can’t see how it could be helpful.