Former FBI agents who worked the Weather Underground case are angry about the longtime relationship between Barack Obama and William Ayers, a leader of the domestic terrorist group who has admitted widespread bombings.

“It outrages me to think that a person would be seeking the presidency of the United States and was close to an individual like Bill Ayers,” former agent Max Noel told Newsmax.

Ayers said in his book that he participated in the bombing of New York City police headquarters in 1970, the U.S. Capitol in 1971, and the Pentagon in 1972. In September 2001, the New York Times quoted him as saying, “I don’t regret setting bombs . . . I feel we didn’t do enough.”

Ayers’ wife, Bernardine Dohrn, was sent to prison for failing to cooperate in solving the robbery of a Brink's armored car in which two police officers were killed.

Charges against Ayers were dropped because the FBI used so-called national security wiretaps that could not be used legally in criminal cases.

Obama launched his political career at Ayers’ home in 1995. From 1999 to 2002, he served with Ayers on the board of the Woods Fund of Chicago. In response to criticism of their relationship, Obama has said he was 8 when Ayers was bombing buildings.

But the presidential candidate was a grown man when he sought and obtained Ayers’ blessing for his entry into politics.

Former FBI agent Willie Reagan said, “I spent seven years of my life hunting down people who described themselves as revolutionary communists and were involved in bombings

Good points that I’ve thought about often. I think all candidates should be screened initially like they are in junior sports where you have to show your birth certificate.

I agree! Bring on the FBI! Swiftboat him!

I had to show my children’s birth certificate to register them for kindergarten. WTH, why doesn’t someone applying for POTUS need to prove he is who he says he is?

Why is it so amazing to the FBI that Obama associates with Ayers ?...THEY ought to know for pete’s sake !...Surely the FBI knew Ayers movements in NY City and Chicago and Obama’s movements in those cities?...He was recruited by Franklin Davis to be a communist front man and by Ayers to run for highest offices, backed by communist money and by the Annenburg Foundations money which in a circular way went into the communists coffers...Are you guys clueless ?...Obama is a Communist front man, just like Gus Hall, and other Commie presidential wannabe’s before him..Only this time he has the right connections through Ayers, Soros, and the Annenburg Foundation...FR has shown the connections right here...

This upsets me no end...Many people out there have the real answers and they are willing to bring America down...Well, we’re not going down without a fight !...so by being a good little Democrat you are voting for Communists !..Fools, all...

“...Shakur is the stepfather of late rapper Tupac Shakur, and father of rapper Mopreme....” (Wikipedia)

28 posted on 10/14/2008 7:26:18 PM PDT by Protect the Bill of Rights (Stand Up Chuck!)
[ Post Reply | Private Reply | To 20 | View Replies]
To: Snappy1MarineMom
Ayers’ wife, Bernardine Dohrn, was sent to prison for failing to cooperate in solving the robbery of a Brink's armored car in which two police officers were killed.

How will YOU feel if "President Obama" has Ayers and his charming thuggy wife over for dinner at the White House? Me? I'll be vomiting for days.

I think something is going to come down on him at the last minute..

Remember, President William Jefferson Blythe Clinton set many unsavory precedents during his eight year reign of terror. What a disgrace, the shame and degradation he brought upon this country - paving the way for the Obamassiah. . and still many people worshipped Bill & Hillary . . and now, this cult of O. (Frankly, some of our redneck neighbors who defended Willy Jeff and insulted their neighbors who didn’t drink the Clinton Kool-Aid will have a hard time - given their prejudices - voting for O. I have to laugh at what they have wrought, if I can manage it.

Standing like Spartans in every breach in the Wall of Obfustication that runs between the American People and the Facts.

33 posted on 10/14/2008 8:54:21 PM PDT by Smokin' Joe (How often God must weep at humans' folly.)
[ Post Reply | Private Reply | To 15 | View Replies]
To: WestCoastGal
there might be patriotic fbi,cia, police, judiciary,and military men that hate what is going on but as long as they protect their paychecks, nothing will happen....

we used to think per Quidam that there was a "5th column" of righteous patriots hidden away in the govt seeking to destroy the crooks and the evil and the treasonous....

To do so would violate their oath’s and federal law.

How's that for a thought? 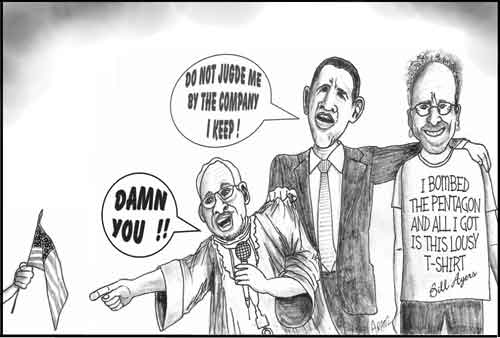 "Man, if my supporters see me smoking---I'm sunk."