Editorial: Put up or shut up on global warming
The Orange County Register ^ | 1-20-2011 | Mark Landsbaum

It is time for an independent investigation of whether or to what degree human activities are creating catastrophic global warming. It should be conducted by scientists untainted by advocacy and uncompromised through receiving taxes or private funding to advance or debunk the theory.

Many in the new Congress were elected on promises to re-evaluate global warming claims used to justify Draconian regulations. A "team of nongovernment and non-U.N. experts must be established with access to all the raw data, records, adjustments, fudges ... and computer codes currently being black-boxed by government scientists," says Robert Ferguson, president of the nonprofit Science and Public Policy Institute for "sound public policy based on sound science." We agree... (click through to the Register's editorial page for the entire editorial)

Memo to the OCR: The science is in, the investigation has been done and the results are: Anthropogenic Global Warming is a HOAX! Case closed.

If any government money is injected into the investigation, it automatically becomes invalid. This could be a tough gig. Honest, legitimate science is hard to find these days. Science is now all about the money. The findings and results always go to the highest bidder.

But I thought all scientists are in agreement on global warming?

But a certain Nobel-anointed ass-clown can’t seem to get the message..

5 posted on 01/22/2011 12:07:18 PM PST by max americana
[ Post Reply | Private Reply | To 2 | View Replies]
To: FlingWingFlyer
AGW is a theory based on computer models. The reliability of the data for the models is in dispute. The models have not shown any predictive power. The earth may not be warming beyond normal variance, or maybe it is, it's to early to draw meaningful conclusions. Most of the scientific organization involved has wrecked their own credibility by supporting hysterical predictions(hockey sticks and Al Gore) or suborning fraud(Climate-gate).
Let's let the scientific community clean house, regroup,and check back in with us in 50 years.
6 posted on 01/22/2011 12:15:13 PM PST by Old North State (Don't blame me, I voted for Pedro)
[ Post Reply | Private Reply | To 3 | View Replies]
To: Mark Landsbaum
...independent investigation...

No such thing. The global warming industry affects everyone. No one is independent of it.

...scientists untainted by advocacy and uncompromised through receiving taxes or private funding to advance or debunk the theory

Again, no such thing. Government funding and/or corporate funding underwrite all scientists. Science is expensive. Where else could the money come from to pay for it aside from taxes or profits?

There have been hundreds of millions of tax dollars spent promoting the idea that greenhouse gas emissions cause harm and that therefore massive government intervention in the private sector is necessary. This is a straightforward conflict-of-interest. Politicians and bureaucrats allocate money to create propaganda promoting the empowerment and enrichment of politicians and bureaucrats. No one remains uninfluenced by this level of spending and advocacy.

That is very true (no truly independent people). I am always extremely irked by the leftists that claim that any research funded by private industry is prejudiced in its outcome. The same charge is true moreover for any federally funded research. The sponsors expect a certain result to justify growing government more, reducing our freedoms, and controlling the populace. The “researchers” dutifully comply and provide the needed data. I am much more inclined to trust private industry than the government. Unfortunately, many industries, including petroleum, have been thoroughly corrupted and enjoy being on the government tit.

9 posted on 01/22/2011 12:45:29 PM PST by snarkbait (<<For Rent>>)
[ Post Reply | Private Reply | To 1 | View Replies]
To: Mark Landsbaum
There is an excellent site that is investigating the validity of the temperature monitoring stations and here is an example of how bad the network is: 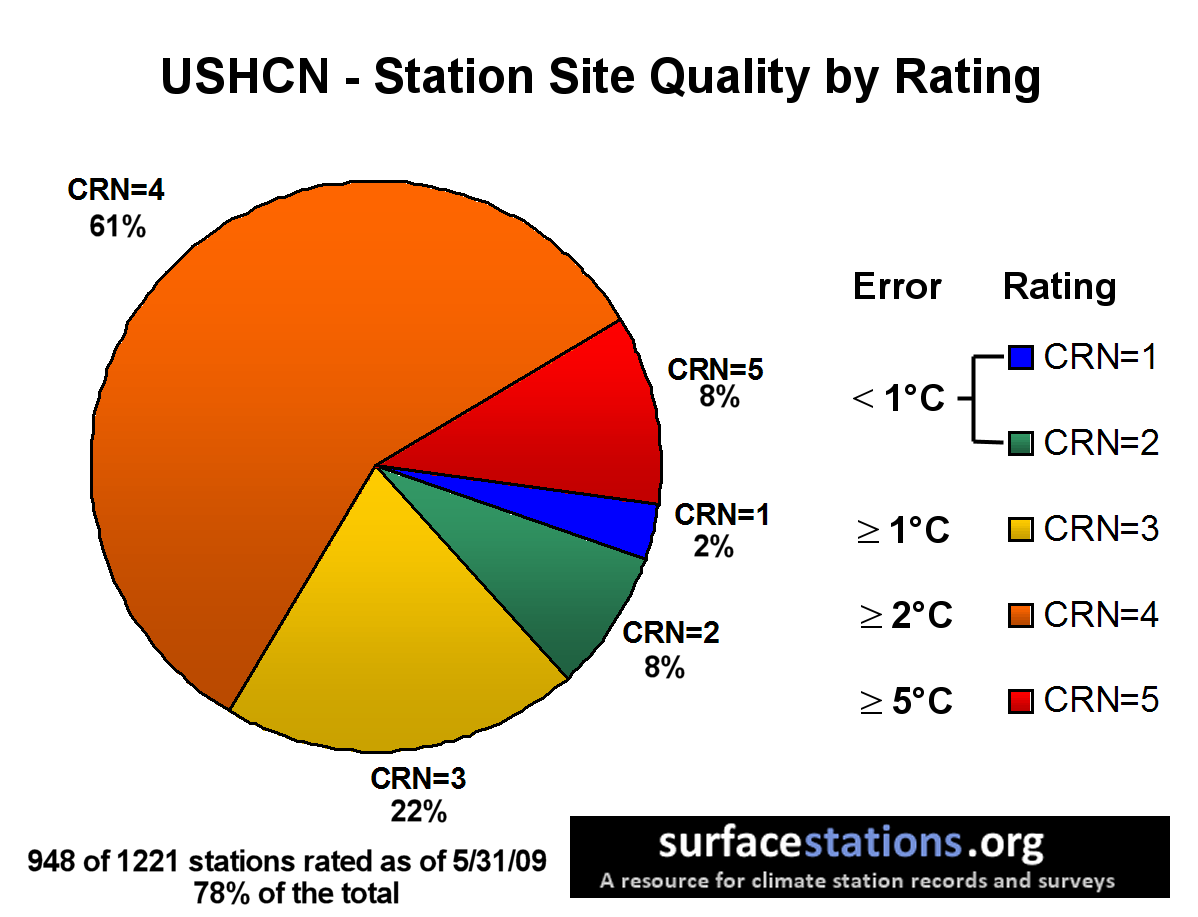 Gosh I LOVE pie charts!! Especially really, really BIG ones. But what the hell does it say? Explain please.

The AGW theory should be suspect because real science was ignored. In true scientific inquiry, data would be analyzed openly by various researchers to prove or disprove the theory. With AGW, there was a clear agenda. Any research that might openly analyze the data were suppressed. Independent researchers who questioned the AGW theory were deemed â€œdeniersâ€ and discredited. Claims that the â€œscience is settledâ€ and a â€œconsensus of scientistsâ€ should end any further open research were clearly not true science and entered the realm of unquestioned dogma. The East Anglia e-mails make it abundantly clear that climate data was being manipulated to give a preconcluded outcome. Even some scientists who originally supported AGW became skeptical as the projected outcomes did not come true. The MSM bought into the AGW hoax and refused to report any studies that countered the theory. The media’s almost comical gyrations to use the record cold and snowfall as “proof” that the earth is warming show desperation to defend the failed theory.

Can’t tell you what it means, its on double secret probation.

You might ask yourself "what would account for the the 35-times-greater chance of reported temps being warmer than they should be, when compared to what we would expect from an 'honest error.'"

“It is time for an independent investigation of whether or to what degree human activities are creating catastrophic global warming.”

It may be discovered that it’s not possible to know whether or not human activities significantly affect the global weather systems, if an honest effort is made.

15 posted on 01/22/2011 1:44:04 PM PST by RoadTest (Religion is no substitute for the relationship God wants with you.)
[ Post Reply | Private Reply | To 1 | View Replies]
To: Steely Tom
A whole lot of data in that pie chart. Thanks for the explanation. Piers Corbyn is now calling for a new independent effort to analyze global temps. Claims the current data base and sensing stations are inadequate and procedures are corrupt.

This is bullsh--t, says astrophysicist. Warm weather NOT causing cold.

"The Claim 2010 is '2nd warmest year on record' - is delusional, irrelevant & disingenuous – the last gasp of the failed global warming cult”

Piers Corbyn warns of more extreme events USA, Australia & Europe at end of month "This will probably be the most exciting weather year around the world for a century"

We could at least start with determining whether the planet is warming or cooling, irrespective of human influence. Right now the error bar states we do not have enough accuracy to even determine positive or negative anomaly. Which is why I trust the Floridian Manatees more then I trust the NWO Apes.

And in the mean time the EPA can go pound sand with all their carbon hockus pokus bullshit. Including the E-85 nonsense.