REPORTS OUT OF KINGSPORT SAY THAT REP. KEITH WESTMORELAND HAS COMMITTED SUICIDE. IT APPARENTLY HAPPENED AT HIS HOME IN KINGSPORT.

AS REPORTED EARLIER ON FOX 17 NEWS, THE KINGSPORT REPUBLICAN WAS CHARGED WITH FIVE COUNTS OF EXPOSING HIMSELF TO CHILDREN AT A HOTEL SWIMMING POOL. METRO POLICE SAY IT'S NOT THE FIRST TIME WESTMORELAND HAS BEEN ACCUSED OF INDECENT EXPOSURE. ON MARCH 13TH A MANAGER AT THE DAYS INN ACROSS FROM WESTMORELAND'S DOWNTOWN APARTMENT CALLED POLICE TO REPORT A MAN EXPOSING HIMSELF. A FURTHER SEARCH OF RECORDS BY THE DEPARTMENT'S SEX CRIMES UNIT TURNED UP ANOTHER CASE INVOLVING WESTMORELAND. THE CASE WAS REPORTED MARCH 26TH AT THE HOLIDAY INN SELECT ON ELM HILL PIKE. HOTEL PATRONS WROTE DOWN THE SUSPECT'S CAR TAG, WHICH SHOWED A CAR REGISTERED TO KEITH. WESTMORELAND. SO FAR THE WOMAN IN THE CASE HAS DECLINED TO PRESS CHARGES....TO PROTECT HER 13 AND 15 YEAR OLD DAUGHTERS FROM FURTHER EMBARRASSMENT.

TOPICS: Breaking News; Crime/Corruption; Culture/Society; US: Tennessee
KEYWORDS: indecentexposure; tennessee; westmoreland Navigation: use the links below to view more comments.
first previous 1-20 ... 41-60, 61-80, 81-100, 101-108 next last
To: Lancey Howard
at least he ended it all by doing the honorable thing

I fail to see the honor of blowing your internal organs out for your family members to find and remember for the rest of their lives.

They can never step foot into that home again without that horrible vision.

As a lawmaker, Whitson owed it to Tennessee to press charges, and not let himself or another lawmaker be set safely away from the reach of the law.

Haven't really heard anything new except something along the lines as fury about the "pressure" of being a legislator. Gee the guys was ALSO a pervert.
89 posted on 06/20/2002 12:51:06 PM PDT by vanna516
[ Post Reply | Private Reply | To 83 | View Replies]
To: ValerieUSA
Zane Whitson is also a Republican that voted FOR the income tax (curious).

Exactly. His family will now have to pay the price of his embarrassment on top of their grief.

92 posted on 06/20/2002 1:48:09 PM PDT by Corin Stormhands
[ Post Reply | Private Reply | To 34 | View Replies]
To: vanna516
Absolutely! WorldNet Daily did a big story on corruption in the TBI and the Gore involvement. Tennessee is about as crooked a state as you will find. I think we could give Arkansas a good run for the money.

93 posted on 06/20/2002 2:09:43 PM PDT by JDGreen123
[ Post Reply | Private Reply | To 90 | View Replies]
To: GailA
This indeed a sad event. Kieth Westmorland was considered by me to be one of the good guys. I'm sure he is opposed by some on this forum who recoil by reflex at the word tax, but he was the only East Tennessee Legislator to articulate the budget problems and an income tax solution.

I have voted for him every time he ran and am sorry I Can't vote for him again.

He apparently had problems but he had a good mind and unlike most, actually led rather than follow the wind.

That would be TBI boss Larry Wallace. WND stories *here* and *here*

Tennessee is about as crooked a state as you will find. I think we could give Arkansas a good run for the money.

Both TN and AR have got a ways to go to catch up to Louisiana, though.

He was also the chief deputy for the Sullivan County Sheriffs Department from 1976-86, and it likely would not have gone well for him in prison.

A few misdemeanor public indecency charges should not have generated much concern on his part about that possibility, however, so it appears that his pals helped him cover up more serious difficulties than exposing himself to teenage girls.

Rape? Child molestation? From one of our trusted public servants? I'm shocked, I tell you, shocked!

If only Clinton had been as honorable... but what am I saying?

Honor was unknown to that, that... person!

If only Juanita Broaddrick had been armed, and had shot the rapist who attacked her in 1978. It might have spared both her and the country a great deal of embarassment and shame, and might have saved the life of Little Rock UPI Statehouse Bureau reporter Judy Danielak six months later. 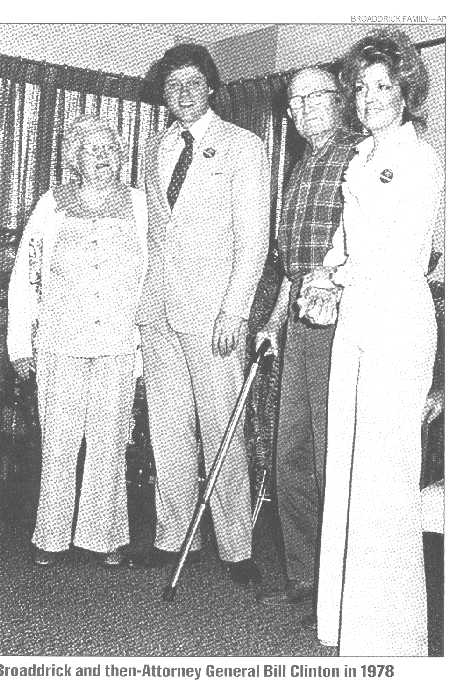 I don't believe so. General William Westmoreland comes from Spartengburg, SC, where his family is very well-known in the textile mill industry thereabouts. I believe the late Representative Keith Westmoreland had a family member in Memphis who was a very high ranking Army enlisted man, a Sergeant Major or Command Sergeant Major, as I recall.