This is a partial list of posts from here, and a few from elsewhere, of the Bali terrorist incident.

Remember, this can come to America...

Before 9-11 there were plenty of signs of things to come yet the public, by and large, ignored them. The attacks on the USS Cole and the embassies in Africa just seemed so far away and raised very few eyebrows here. This attack in Bali should further our resolve. And, in a just world would bring many more nations to our side in this battle. Sadly, it won't.

Notice the damage to buildings in the area.

A massive bomb blast on the Indonesian holiday island of Bali has wrecked the Sari Club nightspot in the resort of Kuta, a popular destination for foreign tourists. 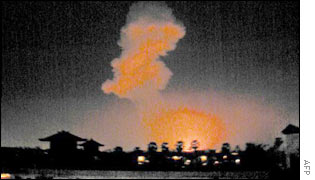 The car bomb went off on a busy Saturday night 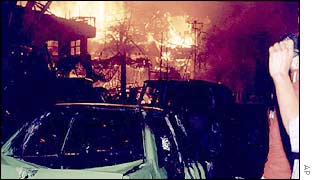 The nightclub's thatched roof and wooden walls burst into flames

Witnesses described a scene of chaos 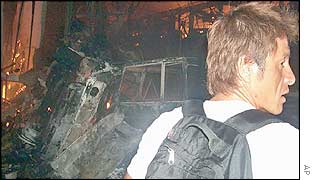 Many of the victims were unsuspecting tourists 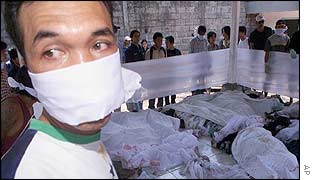 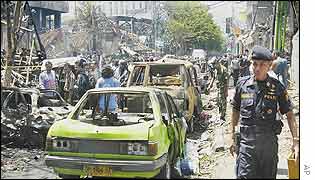 It has been described as Indonesia's worst terrorist attack 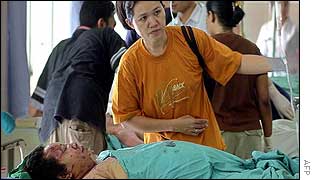 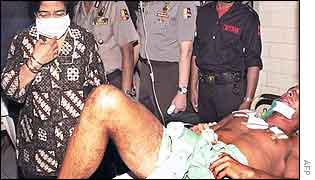 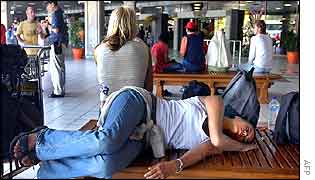 I disagree. We are now in World War III.

I used the word battle, but "World War III" is fine with me. But, in this war we have few allies willing to put up.

Yep. I know some will quibble over whether it's III or IV, but the point is, we are locked in a life or death fight with radical Islam.

All the pretty, moderate talk from politicians can't disguise that simple, stark fact.

The vicious attacks on civillians we have seen in Israel ( not to mention Finland... ) will come home to us unless we hammer those SOB's and those who harbor them.

17 posted on 10/13/2002 5:36:26 PM PDT by backhoe
[ Post Reply | Private Reply | To 1 | View Replies]
To: backhoe
IMPORTANT post, thank you for making this thread Backhoe. It could indeed come to us.
18 posted on 10/13/2002 8:47:14 PM PDT by Libertina
[ Post Reply | Private Reply | To 1 | View Replies]
To: denydenydeny; backhoe
From the article you referenced: "Islamic clerics put love spells on Balinese women to fall in love with Muslims, and Balinese holy men rub the affected in pigs’ blood to undo the spell. The Balinese holy men often use pigs’ blood against the Muslims, and the Muslim holy men chant sentences from the Quran as magic mantras, while clutching a small fetish or two.

Love that pig's blood remedy for Muslim miscreants. We should all keep a few quarts handy.

WorldNetDaily.com: "BIN LADEN'S BROTHER-IN-LAW TO BLAME FOR BALI?" (ARTICLE SNIPPET: "Did Osama bin Laden have anything to do with the weekend massacre in the Indonesian paradise of Bali? A report by DEBKAfile suggests bin Laden's brother-in-law, Mohammed Khalifa, was the mastermind.")(101402)

BBC NEWS: "IN PICTURES - HOLIDAY ISLAND HORROR" (NOTE: Photo Essay is regarding the bombings in Bali. Note 2: Various news reports are advising that as of today, at least 187 are dead (2 Americans included). Up to 300 people wounded, including 3 Americans.) (101302)

BBC NEWS: "FINLAND MALL BOMBER DIED IN BLAST" (ARTICLE NOTE: Up to 80 people injured, 7 dead. Many children were injured. ARTICLE SNIPPET: "The bomb, planted by a Helsinki University student, "was built to cause maximum damage", said a spokesman for Finnish Prime Minister Paavo Lipponen. The bomb contained 4lb (1.8kg) of explosive materials and a number of ball-bearings or similar materials which acted as shrapnel.") (101202)

JERUSALEM POST.com: "SUICIDE ATTACK AVERTED IN TEL AVIV" (ARTICLE SNIPPET: "The man, a Palestinian who was spotted by the security guards of the French embassy in Tel Aviv wearing an explosive belt, was stopped and stripped of the belt, the reports said.") (101102)

BBC NEWS: "INQUIRY LAUNCHED INTO YEMIN BLAST" (ARTICLE SNIPPET: "The owners of the tanker, Euronav, say they believe their vessel was deliberately rammed by a smaller boat. "In my opinion, this was a terrorist attack," Euronav director Jacques Moizan said. "The crew saw a high-speed vessel approaching on the starboard side. "An explosion followed with fire." All but one of the eight French and 17 Bulgarian crew members have been accounted for and many of them have been taken to hospital.") (100702)

YAHOO! NEWS - FULL COVERAGE: "EXPLOSION IGNITES FIRE ON FRENCH OIL TANKER OFF YEMEN" (AP SNIPPET: "(AP) - An explosion and fire engulfed a French oil tanker on Sunday off the coast of Yemen, and the tanker owner said a small boat struck the vessel in a "deliberate attack."...)(100602)

GULF NEWS.com: "SONS OF YEMENI SPEAKER ARRESTED" (ARTICLE SNIPPET: "The press office of Yemeni Parliament Speaker, Sheikh Abdullah bin Hussein Al Ahmer, has confirmed that two of his sons are in custody for the shoot-out which took place near the British Embassy last Sunday. "Sheikh Abdullah regrets for what was circulated by media about the incident. Fallasies, exaggerations and lies have been circulated by some sick people," said a press release issued by the office.") (100302)

FOX NEWS.com: (AP): "YEMENI STUDENT SUSPECTED OF AIDING HIJACKERS SENTENCED TO SIX MONTHS" (ARTICE NOTE: The Yemeni student is identified as Mohdar Abdullah, age 24, a former San Diego State University student. ARTICLE SNIPPET: "Abdullah, 24, acknowledged that he lied when he told an immigration officer that he entered the United States on Dec. 7, 1998, at New York on an Italian passport. In truth, he entered three days later from Canada on a Yemeni passport. The sentencing did not address the explosive allegations made in court documents that investigators suspect Abdullah helped three Sept. 11 hijackers who lived in San Diego in 2000.") (100202)