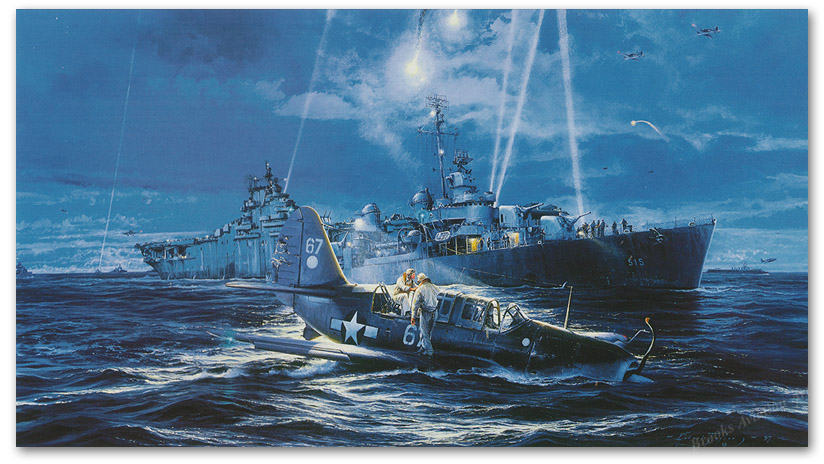 After a three day sea search for Admiral Omwa's carrier fleet it was 3:30 p.m. on June 20, 1944, when a spotter plane reported the enemy position to Admiral Mitscher's Task Force 58. Mitscher knew the risks of dispatching a large force on such a long-range mission so late in the day, but he also knew his task was to get the carriers. By 4:30 p.m. over 200 fighters, dive-bombers, and torpedo strike planes were in the air and heading for the target.

In the short but intense battle that followed late that day, the Japanese carrier Hiyo was sunk, four more Japanese carriers were damaged, two oilers sunk, the battleship Haruna hit, and some 40 enemy aircraft reported destroyed. Fierce, and seemingly successful though the encounter was, for most of the American aircrews the worst part of the mission was yet to come.

As 209 aircraft turned and headed east into the growing dark, most of the pilots knew they had barely enough fuel to get back on board their carriers, some 270 miles distant. Many of the aircraft had received battle damage, and some of the crews were wounded.

It was 8 p.m. and pitch dark as the first of the returning aircraft neared the carriers. Admiral Mitscher knew that without some form of guidance it was going to be impossible to recover his aircraft and, ignoring the submarine threat, boldly ordered the fleet to turn on lights. But the arriving Helldiver and Avenger pilots were all but out of fuel and in the confusion of trying to pick out a carrier and find a landing slot, compounded by a number of deck crashes, some 70 planes went into the water that night. For Mitscher's aircrews, the long return to TF-58 went into history as the 'Mission Beyond Darkness'.

In recreating this awesome scene, Robert Taylor has painted a masterpiece of naval aviation warfare in the Pacific. In the foreground the SB2C Helldiver of Lieutenant Ralph Yaussi, its tanks dry, has ditched near the carrier USS Lexington. As Yaussi and his gunner James Curry clamber out of the sinking aircraft, the Fletcher class destroyer USS Anthony, her 24 inch searchlight ablaze is moving in to make the pick-up. The chaos and confusion of that infamous night during the Battle of the Philippine Sea, springs back to life in this stunning painting.

click on the graphic
44 posted on 06/22/2003 2:48:45 PM PDT by Victoria Delsoul
[ Post Reply | Private Reply | To 5 | View Replies]
To: Victoria Delsoul
Good Afternoon Victoria. You just reminded me I missed afternoon break at the Foxhole. I've been busy working.

Well, hopefully Sam will regain his freedom very soon and will be able to help you.

I'm late today, but it's really never late for a break.

Without doubt, the best carrier-based fighter of World War Two, was the Grumman F6F Hellcat. A larger and more powerful development of the earlier F4F Wildcat, the Hellcat was designed to counter Japan's excellent Zero fighter. The Hellcat was armed with six .50 caliber machine guns as well as rockets, and the wings folded flat against the fuselage so more could fit on board aircraft carriers. The Hellcat's design sacrificed speed for a high rate of climb and exceptional maneuverability. It was also a very rugged and well armored design. The Hellcat first flew in June 1942 and was deployed operationally in the Pacific in August 1943 where it participated in every major engagement of the war. At one point in 1944 Grumman was turning out one Hellcat per hour - 644 in one month - an aircraft production record which has never been equaled. A total of 12,275 were built. 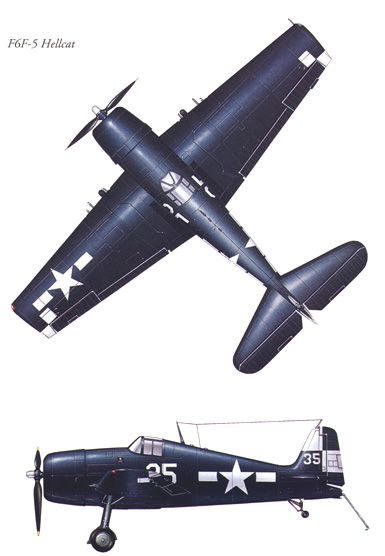 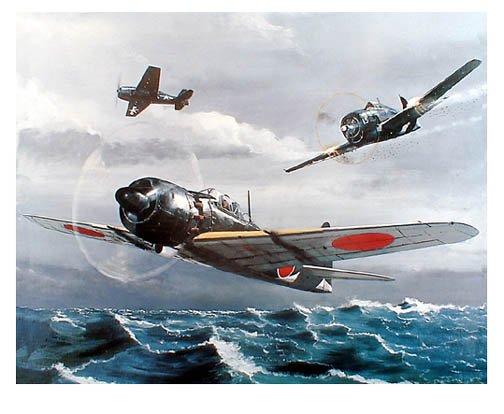 Patterned after the Hornet (CV-8), the Essex Class Carriers were to receive some significant structural changes. The Essex would be designed to carry two squadrons of airplanes versus the normal load of one squadron. This increase in planes would necessitate and enlargment of both the flight deck and hull. More stowage space for fuel and armaments called for a thicker hull to protect these vital materials. An elevator was positioned on the side of the carrier allowing uninhibited usage during flight operations. The superstructure or "island" would comprise the command center along with the captain's bridge. This increase in size would also allow for improved visibility to aid in ship handling. Consequently, these structural changes would increase the ships displacement requiring an expansion is ship power requiring eight Babcock and Wilcox boilers. These boilers would be used to produce enough horsepower to propell the ship at over 30 knots.

Similiar in desaign to the earlier Shokaku class, Taiho was Japan's largest purpose-built aircraft carrier and the first to feature an armored deck. Total armor weight on this ship came to 8,800 tons which was a very high number for an aircraft carrier. She was destroyed only a few weeks after entereing service by a single torpedo hit from the US sub Albacore which ignited fuel vapors and blew her up.

Two more vessels were planned to her design and a further 5 to a modified design.

SAM's in-laws are staying, yes staying... They are not leaving.

What's new with me, eh? Ummmmm, working on a couple web sites. And dog-sitting two male critters that like to lie at my feet and vent noxious odors. Ewwwwwwwwwwwwwwwwww! I'll sure be glad when my mom and sister get back from Myrtle Beach and take them home!

Looks like you're having a good time. That's great.

I'm doing well, thanks. I'll be working during the summer giving Italian lessons, but that's OK, it's money in my pocket, hehehe.