He Was Going to Name Names And Ends Up with a Bullet in Him  Rep. Louie Gohmert Remembers His Friend Philip Haney on House Floor (VIDEO)
The Gateway Pundit ^ | February 29, 2020 | Jim Hoft

The Amador County Sheriff Martin Ryan released a video this week on Haney’s death. While the death scene made it appear a suicide, Ryan wants it known that a determination has not been made as to the cause of death.

Rep. Louie Gohmert (R-TX) spoke out on the House floor this week to remember his friend Philip Haney.

Rep. Gohmert did not come right out and say Phillip Haney was murdered. But he did do an excellent job of explaining why members of the Obama administration would have excellent motives to have done so.

Rep. Louie Gohmert: “I had a friend I met here years ago. His name is Phil Haney and he was one of the kindest, most patriotic, competent people I’ve ever known in my life… We had a mutual pact. If it’s said that either one of us end up having committed suicide then the other is going to make sure that truth wins out… He saw things that were a threat to this country, he said something, and he was severely punished for it, because apparently the Obama administration had some radical ties that they did not want anybody, including Philip Haney, to expose… He was gonna name names of people that put this country at risk…and he ends with a bullet in him?”

Vlad Tepes has the entire speech. 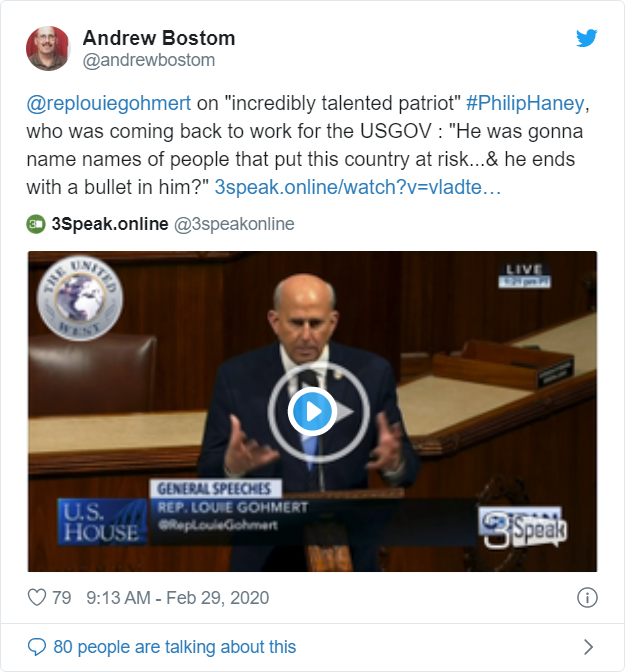 The tweet is now unavailable on Twitter, whatever that means, but the one on Gateway Pundit still works.

“...While the death scene made it appear a suicide,..”

Err...assassins are expert at that.

It appears Philip Haney did not provide the names and evidence to Rep Gohmert...or did he?

Note: If you have something to say-say it don’t just tell people you are going to in advance.

I am sure Barr will get right on this.

When will these ‘suicides’ stop! Comeon, Gohmert. Speeches are nice, but they have no effect. It’s time to put these people away. If you know something, say something!

Amen to that. It’s way past time to stop sitting on revelations. I have to think that Philip Haney would have been cagey enough to have a “dead man switch” on any important information he might have had.

Sorry, Louie ... but that smells like bullsh!t. Claiming a guy was “going to name names” after he’s been talking about this sh!t for almost a decade is just silly. Did you think Whitey Bulger was just about to “name names” before he was offed in prison at the age of 275?

He did have a dead man’s switch(s) and likely testified to a grand jury which you will never know until things open up.

Seems a bit much but so is expecting anyone to believe he committed suicide. He must have known it might come did he not set up a kill switch that would cause a data dump?

The Kenyanesian Usurpation will be protected at all costs.

>I am sure Barr will get right on this.

So yeah, keep squawking, Republicans. You're all toothless, paper tigers and have zero cred.

I’m not buying it. He was asked to delete files years ago. So now he was going to name names?

Seems like we are in some 3rd world state—or Russia. Looks like its becoming common for political assassination. I think it started with Obama/Clinton. Lots of Reporters died mysteriously.

Seems like we are in some 3rd world state—or Russia. Looks like its becoming common for political assassination. I think it started with Obama/Clinton. Lots of Reporters died mysteriously.