Grenell tweet on Kislyak-Flynn transcripts suggests interesting scenario for what the FBI was doing
Liberty Unyielding ^ | May 23, 2020 | J.E. Dyer

In the last article on this topic, we looked at how unlikely it is that the well-synchronized story of James Comey, Andrew McCabe, and the FBI leakers from early 2017 is actually true. My own assessment is that the FBI is indeed the agency that reported the Kislyak-Flynn phone calls to the other Obamagate principals. But it’s very improbable that the FBI had to go hunt the phone calls down, in response to a community-wide appeal inserted in the presidential daily briefing (PDB) on 30 December 2016.

There’s really no scenario in which that claim makes sense. But it especially doesn’t make sense given that the FBI obviously had to have the contents of the phone calls in order to know – as claimed from the beginning – that Kislyak and Flynn discussed sanctions. You can’t glean that from metadata about the phone calls. You have to have the voices talking to each other.

There is actually a scenario in which it’s conceivable that the FBI discovered the calls had occurred, and then went back and exploited the audio. It’s not technically impossible. But it’s also not a good scenario for the FBI – not in the sense of strict lawfulness, and dotting i’s and crossing t’s.

Kislyak and Flynn didn’t discuss sanctions, they discussed the 35 persona non grata. Even Flynn stated such.

They should be able to at least get that right.

Long story short, Grenell doesn’t have access to the full transcripts or the audio because it didn’t originate through FISA-accountable IC channels (i.e. Stingray).

The data is being held by someone at FBI - the Flynn debacle is looking to be entirely of FBI origin - but the culpability of other agencies is still presumed regarding their actions on other targets.

Good read. Thanks for posting.

There’s nothing worse than getting some ripe fbi on the bottom of your shoe...

Or, the call was a nothing burger
Or, the connections were crap and nothing of consequence was discussed.

what is they have no transcript and everything was a bluff??

5 posted on 05/23/2020 6:27:13 PM PDT by Steven Tyler
[ Post Reply | Private Reply | To 1 | View Replies]
To: CheshireTheCat
The theory is dependent on Kislyak being at the Russian Embassy that day, however I've read he went back to Russia for the holidays.

Not sure which is true.

6 posted on 05/23/2020 6:31:22 PM PDT by CaptainK ('No collusion, no obstruction, he's a leaker')
[ Post Reply | Private Reply | To 1 | View Replies]
To: CheshireTheCat
There are theories on how they got the phone calls. However, it is obvious they were stored in the Utah NSA Data Center. I am sure the information is stored in text form, using Dragon type software, to save storage space and to make for efficient search results. I can see someone like Peter Strzok, with a click of a mouse, downloading the NSA's file on LTG Flynn. With 1.7 million gallons a day used to cool it there's lots of data (and dirt) stored here: 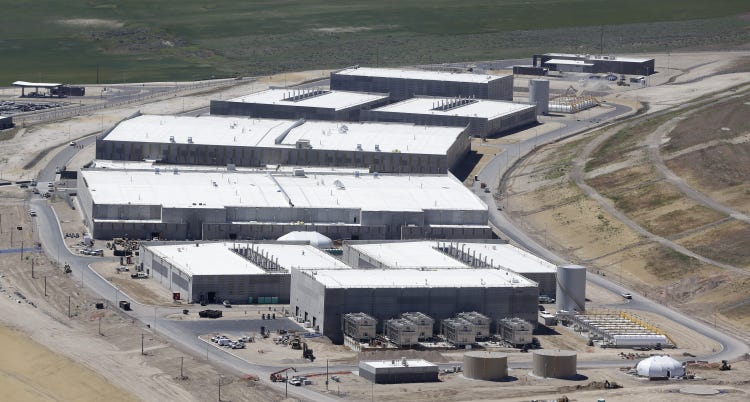 You dont need that big a facility to store it in text form. If you could collect the data, you could store the text every word spoken by every person in the US for,the past two decades with a unique number to ID the speaker and a timestamp of when the word was spoken, all uncompressed, on an obsolete hard drives stored in your closet.

The technology to store all U.S. conversations on a hard drive I am not familiar with. That’s a question I could ask my Microsoft relative. However, the Utah NSA stores world wide data, including photos and videos from you cell phones and emails. That’s why we have intelligence satellites.

Sum of:
Average length of words spoken
# bytes needed for unique ID
# bytes for timestamp when when word is spoken

How many days you could fit on the hdd in your laptop?

How many hhds could you stack in your closet?

I did the math a few years ago.

I remember reading a few years ago, how authorities were finding all kinds of “suitcases” with the types of systems that are used to capture cell phone calls. How they work, is you would place a network of these suitcases in and around an area where you wanted to monitor cell phone conversations.

The box, outputs a carrier signal, such that it is stronger than the nearest legitemate cell phone tower. Anyone’s cell phone, within the vicinity of these “special suitcases”, would connect to the suitcase, as opposed to the legit cell tower. In essence, the carnivore type systems trick the cell phones in the vicinity to believe that they are the legit cell tower, and all calls are routed through this suitcase, which records location data, as well as every email, text, and phone call that is tricked into connecting through this system. The data is then forwarded by these systems into the legit cell network, with only milliseconds of delay, certainly not any amount of time that could be detected by the users.

What becomes interesting, is that it is now known that not only is our federal government using networks of these devices within cities, they now have drone mounted systems, which hover over pre-targetted area. Imagine what you could learn from listening to all the phone calls going on within DC, especially if you are a foreign government. Don’t think that the Chinese, Russians, and other countries haven’t taken advantage of this weakness in our communications. Moreover, Law enforcement is able to turn on your cell phone, and use your speaker and video camera, without the phone appearing to be powered up. Certain phones can be activated even if you take the battery out, as these certain phones have on-circuitboard batteries. It is an old project, but the US gov’t long ago collected our voiceprints, using a variety of methods. You’d better not think you can use “burner” phones like Saul Goodman. They also have a nearly complete database of what everyone’s face looks like, so you can be identified by video cameras that are now almost everywhere. We now live in a Police state that science fiction fans would find unbelievable. We have traded our liberty for peace (from terrorists) and we will likely have neither.

When they come for us, I’m sure I’ll be at the top of my neighborhood list, but these things need to be exposed, or they’ll only become more emboldened. If they get away with what the did to Flynn, it’s all over for us serfs in flyover country. They’ll just induce a famine, and those of us considered enemies of the state, will see no aid.

In my town, in rural New Hampshire, the town police have half a dozen drones, of which, there are always three in the air. The signifigance is that these drones are now armed with incredibly powerful cameras. By hovering in one location, a drone can now completely surveil an area of 30 sq. miles. They can read a newspaper at 3 miles, and can hear voice conversations over 200 miles away.

They’ve sold this to law enforcement, so that crime solving will be easier. Imagine a murder takes place, and your coroner gives you an approximate time of death. You simply review the surveillance video you have of that location, and roll it backwards, to where the killer came from; if he had any accomplices; if they stole a getaway car, etc. They can do this, on a near real-time basis because the drone videos capture your face well enough for facial recognition software can identify you. But it begs the question, when is enough,enough?