It’s chilling to see American citizens forced to wear masks.  Too reminiscent of Nazi Germany when over a half million people had to wear a badge to identify as a Jew.

“Jews over the age of six in Germany are required to wear a yellow, six-pointed star with the word “Jude” (German for “Jew”) across the front in black, sewn to their outer clothing at all times.”

If we can be ‘ordered’ to wear a mask why not a badge, a wristband, a chip.

But these these governors are just trying to protect their citizens. They’re not dictators.

Kim Jong-Il - “There’s such total control that four people talking together can be seen as a conspiracy.”

- Governors who ordered state-wide lockdowns placed every single citizen under house arrest. They’ve issued restrictions on how close we can to stand to each other, how many can stand together.

- Governors in 45 states used their pen and phone to nationalize American companies. These governors expropriated every single company, business, and shop in their state.

Adolf Hitler “Perhaps the most important factor in Hitler’s rise to power was his passing of the Enabling Act in 1933 which allowed him to make laws without approval by anyone else. Hitler could make any rules without opposition.”

- Our governors don’t need an Enabling Act to establish their dictatorship. Their police powers are sufficient to establish police states. They already can and do “make any rules without opposition”.

Still, the lies persist and other states quickly jump on the takeover bandwagon.  But why are there no restraints, no requirements for the governor to show just cause for his/her order?

TOPICS: Government; Politics
KEYWORDS: mask; tyranny
Tyranny does best when introduced by law.  In 2019, millions of Hong Kong citizens launched protests against a law that would allow the extradition of suspects to mainland China.  The protests continued for months.  They didn’t accept a law as their master, they didn’t silently acquiesce.

During the protests, pro-democracy supporters began waving American flags, singing the US National Anthem to show their “desire for American-style freedoms”.

But those American-style freedoms were pre-virus, pre-lockdown. Perhaps today it would be more appropriate for Americans to wave Hong Kong flags to remind us of that time when we were the ‘beacon of freedom’.

And let us remember our heritage and, with it, our destiny—the destiny of this shining city on a hill, this beacon of freedom for all the peoples of the Earth.”  - Ronald Reagan

Leftist democrats are all tyrants. They are your enemy,folks as are all the people who vote for them.

I don’t think any of us realized how much power our governors have. In fact, I don’t think even they realized it until now. Trump gave them permission with his emergency order and they took it and ran with it. This was mostly, I think, because they were trying to show how much more powerful than Trump they were, and because they wanted to attack the economy and also punish and suppress people who were the type who might have voted for him...business owners, etc.

But whatever, it is true that they just went ahead and did it...and we didn’t resist and now it seems as if it might be too late to ever get our freedoms back. But I don’t know. In some ways, I think this black unrest is an inarticulate rebellion against it by people who have been locked down, separated from any moderating social contact (sports, school, etc.), lost whatever jobs or positions in society that they may have had, and are just plain full of anger and resentment. (This has been exploited by Antifa, but they have different motivations, of course.)

I‘m not sure what we can do. Perhaps if there are legal challenges on Constitutional grounds we can force some clarity and definition - and impose some restrictions. I can’t see how a governor’s powers can include simply ignoring the Bill of Rights and all constitutional protections. But that’s how they’ve interpreted it, and the DOJ and Trump government have got to challenge this while there’s still time.

If a Dem gets elected in November, it’s definitely going to be all over and we will be exactly like Communist China, which is the ideal society of the Democratic Party.

Here in Orange County, Calif. employees of supermarkets, pharmacies, etc. must wear masks, but there is no legal requirement for customers to do so. However, most stores now require customers to wear masks.

Anti-mask activists have told me that you can refuse to wear a mask due to a medical condition (the need to breathe oxygen and not one's own CO2)--and it is illegal under the Americans with Disabilities Act for the gatekeeper to inquire as to your condition. If the gatekeeper still insists on not letting you in, you can demand that he pick up the items you are shopping for and then bring them to you at the check stand. If he still refuses, boycott the store.

Mandatory masks and the killing of George Floyd share one thing: they are tyranny, abuse of power, and violations of basic human rights.

It’s not about your health

I’m out and about, seeing people keeping their masks on all the way to their cars...and masks on their toddlers too. Sunny day in the 80’s, they’re outdoors in garden centers of Home Depot, Walmart...masks on. In the middle of PA where maybe 1 in 10,000 has died of covid19.

It makes me sad, anxious and angry all at once.

And the stores require it because...liability and the threat of penalties. Caught between insurance and government, one protection racket and another.

I wouldn’t even call it tyranny, which is by necessity severe. These sheeple don’t call for severe measures. 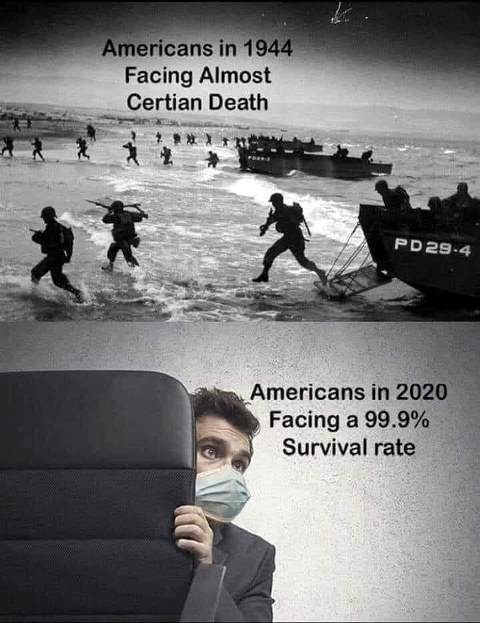 Then doctors and nurses should stop wearing masks.