Yes, Joe Biden Would Ban Fracking In Pennsylvania And The Rest Of The U.S.
Noisy Room ^ | September 7, 2020 | Daniel John Sobieski

Joe Biden has made it clear that he was for fracking before he was against it. Forget the cognitive testing – the cognitive dissidence of the incoherent policies his puppet masters are feeding him through his earpiece is enough to disqualify him for the presidency and may doom him politically in key states like Pennsylvania just as Hillary Clinton’s pledge to bankrupt a lot of coal companies did.

Banning fossil fuels and killing the energy independence Trump achieved before the Wuhan virus pandemic would kill the American economy and future hopes for recovery. It is said a little child shall lead us and a little child named AOC wants to lead us and a President Biden over the economic cliff. She, and Biden running mate Kamala Harris, may only succeed in pushing Biden over the political cliff as voters realize solar panels and wind turbines are not all that good at creating jobs in the gray skies of winter.

I heard he won’t give a frack about Pennsylvania.

2 posted on 09/07/2020 4:24:18 PM PDT by frank ballenger (End vote fraud,harvesting,non-citizen voting & leftist media news censorship or we are finished.)
[ Post Reply | Private Reply | To 1 | View Replies]
To: raptor22
Joe Biden has made it clear that he was for fracking before he was against it.

3 posted on 09/07/2020 4:26:17 PM PDT by SmokingJoe
[ Post Reply | Private Reply | To 1 | View Replies]
To: raptor22
PA is on the Six Swing State list, therefore he never said what he actually said, and the huge fracking and fossil fuels industry in the state can totally believe his sudden change of heart. Ahem.

WI, AZ, NC, FL, and PA are all trending in Trump's direction in the last two months, despite the DNC Convention, and the naming of Kamala Harris as the VP pick... zero bounce for either one... which is why CNN isn't talking about the numbers at the moment. MI is mostly flat for the last two months, depending on the poll you track.

(Curiously, even though Ohio is within the margin of error, it is NOT listed as a Battleground State for 2020. Seems like they already know that the numbers are far worse for Biden than what is being released.)

Vegetablejoe barely knows what state or city he’s in.

It’s his Soros-supported Marxist puppeteers who will be pulling the strings once the Demonicrats stuff the ballot box with bundles of phony mail-in votes, which the USPS will supply with predated postmarks and the John Roberts SCOTUS majority will certify.

POTUS and VPOTUS destroys them in the debates... 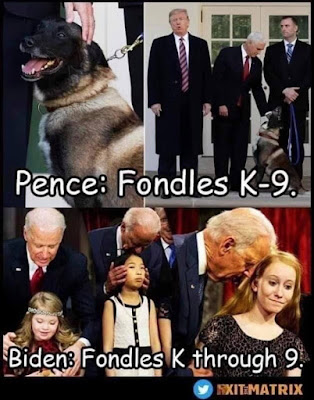 I’m sure Hidin’s 47 year, DC timeline has had a number of positions on the issue.

actually, biden mentioned in one of his pittsburgh speeches that he’s going to eliminate the use of fossil fuels, so this whole fracking thing is completely mooted by that ...