Dark matter was actually discovered by Fritz Zwicky in the 1930’s. Neptune doesn’t qualify since it’s not dark and we know what it is.

Pretty good article. The other bizarre quality of the aether was that it needed to be a solid because of transverse waves.

And Einstein referred to the the experiment of Fizeau rather than the Michelson-Morley experiment. I don’t know why.

Studies show that dark matter somewhat follows the distribution of visible matter, but not exactly and not always. Those discrepancies offer clues about its nature. The discovery of first one, now two small galaxies that appear to have no dark matter supports the notion of dark matter as a particle. Here’s why:

>> Neptune doesn’t qualify since it’s not dark and we know what it is. <<

Read the article. Dark means “unknown.” We know what it is NOW, but it WAS dark matter. When we discover what more of dark matter is, it will no longer be dark, also.

dark matter is an inferred ‘fudge factor’ to make their equations work. Maybe it exists, or maybe it doesn’t and the equations are missing something.

Just don’t let Malekith get ahold of the aether.

10 posted on 04/03/2019 4:01:00 PM PDT by BipolarBob (I got dozens of friends and the fun never ends that is, as long as I'm buying)
[ Post Reply | Private Reply | To 1 | View Replies]
To: dangus
Point taken. However, dark matter was never a term until Fritz discovered that there was unaccounted matter in the universe.

The discovery of Neptune was based on the assumption that there was a planet there, which is correct. It was never assumed that it was something entirely unknown at the time. Today, no one still has the answer of what dark matter is. Only hypotheses.

If you really want to twist your noodle, the following link offers a different perspective that isn’t discussed much, though Tesla appeared to have grasped the concept.

Yes. Names like dark matter, dark energy, event horizon, singularity are names scientists give things when they have no freaking idea what they are.

And yes heavily invested in fudge factors to make things work. The Galaxy would fly apart without Dark Matter. But they haven’t a clue what and where it is. ( the late Vera Rubin discovered that our Galaxy did not operate as a large solar system but spun like a solid disk and should fly apart with the lack of Mass in the visible galaxy...so they assumed there was unseen mass and called it Dark Matter)

Definitely a racissss name for it.

14 posted on 04/03/2019 4:23:28 PM PDT by doorgunner69
[ Post Reply | Private Reply | To 1 | View Replies]
To: LibWhacker; 1FreeAmerican; A. Patriot; AndrewC; antonia; aristotleman; Bellflower; Boogieman; ...
No, dark matter doesn’t exist. There is a competing cosmology that actually explains what controls the Universe far better than the gravity driven model and actually predicts the new discoveries that keep surprising, astounding, and shocking the orthodox gravity cosmologists time and time again. This cosmology does not require the invocation of magic fairy dust of dark matter and then later magic dark energy to squish and squeeze their mathematical models to fit reality. They just work and can actually be demonstrated in the laboratory and can be scaled from the microcosm to the macrocosm merely by increasing power. That cosmology is the:
Electric/Plasma Universe Cosmology — PING! 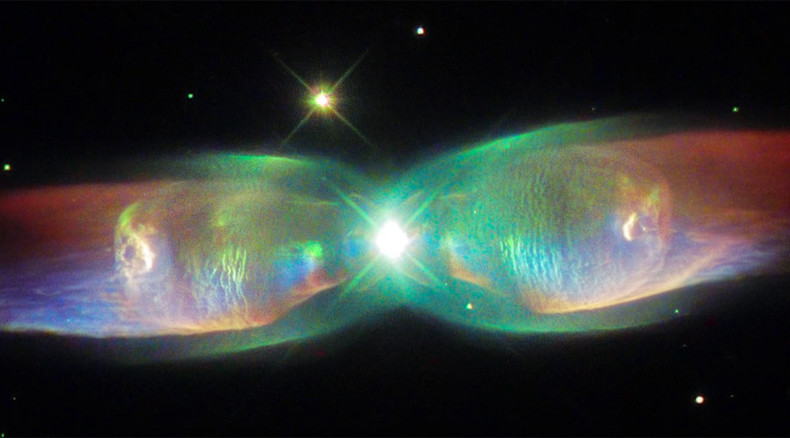 
If you want on or off the Electric Universe/Plasma Ping List, Freepmail me.

Excellent article at your link:

The French existentialist writer Albert Camus once wrote, “…there is no more dreadful punishment than futile and hopeless labor.” Though we are not accustomed to thinking of science as hopeless labor, there is a domain of science today for which the description may be perfectly apt. Space Age technology has achieved wonders. But according to critics, many theoretical adventures undertaken to explain astonishing Space Age discoveries have set the theoretical sciences down a dead-end path.

An example of this may be the unyielding belief of a majority of scientists in the existence of “dark matter.” Dark matter entered the lexicon of astronomers and cosmologists as a way of dealing with a serious theoretical problem. In observing the motions of galaxies in clusters, they calculated the mass needed to hold the cluster together. They found there was not nearly enough. So they calculated the amount of mass that could not be seen but MUST be there in order to account for the observed motions.

The line of reasoning seemed unassailable, and it followed directly from a theoretical assumption shared by almost all astronomers. This foundational assumption is that, at the macrocosmic scale, gravity reigns supreme. It is gravity that organizes galaxies and gives birth to their constituent stars. So if there is not enough visible mass to do the surprising things seen in space, then the only option is to add invisible mass to make the astronomers’ equations match observations.

Another “weird” and “invisible” influence that supposedly affects the motions of galaxies is “dark energy.” Discovered (or perhaps “invented”) in 1998 in response to anomalously low brightness of Type 1a supernovae in high-redshift galaxies, dark energy is believed to be a kind of cosmic antigravity. Its proponents say that its repulsive effect causes galaxies to fly apart at an ever-increasing speed – thus accelerating the supposed “expansion” of the Universe. But these claims depend on the astronomers’ interpretation of redshift as a reliable indicator of velocity in an expanding universe and therefore, distance. It also depends on a shaky theoretical understanding of Type 1a supernovae. (See Supernova 1987A Decoded) Today, that interpretation is challenged by a rapidly growing number of contradicting observations, causing scientists to look for alternative causes of redshift. (See The Picture That Won’t Go Away and Redshift Rosetta Stone)

Under the pressure of unsolved enigmas, the current position of official astronomy is that only 4% of the universe is “visible” matter. The other 96%, is composed of dark matter and dark energy—all of which, by definition, is invisible. “The universe is made mostly of dark matter and dark energy,” says Saul Perlmutter, leader of the Supernova Cosmology Project headquartered at Berkeley Lab, “and we don’t know what either of them is.”

But these mysterious, ubiquitous, and invisible inventions are only “necessary” because astronomers hold to a belief that is no longer tenable — that electromagnetism plays no appreciable role in the organization of cosmic structure and powering of stars. Plasma cosmologists and proponents of the “Electric Universe” – who study the behavior of electrically powered plasma in the lab and in nature – insist that the astronomers’ belief is incorrect.

One of the great scientific “secrets” in modern times is that many of astronomy’s most fundamental mysteries find their resolution in plasma discharge behavior. On the pages of Thunderbolts.info, this point has been enumerated in countless Pictures of the Day. For example, computer simulations have demonstrated that the motion of the spiral galaxy can be achieved through nothing other than interactions of electric currents in plasma. From the TPOD Plasma Galaxies:

“Plasma experiments show that rotation is a natural function of interacting electric currents in plasma. Currents can pinch matter together to form rotating stars and galaxies. A good example is the ubiquitous spiral galaxy, a predictable configuration of a cosmic-scale discharge. Computer models of two current filaments interacting in a plasma have, in fact, reproduced fine details of spiral galaxies, where the gravitational schools must rely on invisible matter arbitrarily placed wherever it is needed to make their models ‘work’.

Okay, that was funny.

In the same genre of thought, years ago, before my time in the Army, I was on a “ride-along” with an officer friend of mine just north of Baltimore, Maryland.

I kid you not, Baltimore County was already so politically correct, the county government dictated to the police, they could not use the terms “African American” or “Black”, to describe blacks and African Americans.

The default and accepted term used by police was “#2(’s)”.

This was the acceptable term by a county government, which included seats held by “African Americans”.

Using the same logic as the left, every word from every language could only ever be race derived, and therefore racist. So how is it only “white language” is racist?

These people really are nuts, and truly are a bunch of racists at heart!

True racism is not derived from a word or term, but rather hatred in ones heart, (which could be silent and never spoken”

17 posted on 04/03/2019 5:11:07 PM PDT by patriotfury ((May the fleas of a thousand camels occupy mo' ham mads tents!))
[ Post Reply | Private Reply | To 14 | View Replies]
To: Vaquero
Names like dark matter, dark energy, event horizon, singularity are names scientists give things when they have no freaking idea what they are.

Merely a consequence of the limitations of language itself, not of science, its practitioners, or their seeming clumsiness with english.

True racism is not derived from a word or term, but rather hatred in ones heart, (which could be silent and never spoken), toward a group of people, just because of an “unchangeable”, such as is found in physiology or color.

Accusing other of racism, as a way to manipulate others of a different “race” to a specific end, is pure racism!

No, they are names given to entities that account for experimental results and observations. The properties of these entities are well-defined so that further tests and observations either can confirm or falsify their existence. Dark matter, for example, is defined to be an entity that interacts only via gravitation and not via any of the other three fundamental interactions (electromagnetism, the strong nuclear force or the weak nuclear force). Since it interacts gravitationally, dark matter must have mass. Since it does not interact in any other way, it must not have electrical charge or color charge. It must not be composed of quarks and therefore cannot have strangeness, charm, topness or bottomness (these are very specific quantum properties that have nothing to do with the ordinary meanings of the words).

The fact is that ALL entities in science are defined in this manner, by inferring their properties from experiment. Just as an example, answer this what is an electron? We can define it only in terms of its mass, charge, spin, etc., all of which are inferred from experiment. We’ve never actually seen an electron or measured one directly. The main difference is simply the amount of evidence we have — there are more observations based on electrons than on dark matter. This is unsurprising since electrons are much easier to interact with. Even if you were sitting in a room full of dark matter or standing on a mountain of it, you’d never notice. Gravity is a very weak interaction, producing noticeable results only when dealing with planet-sized or bigger objects. If we had to rely on the gravitation of electrons, we undoubtedly would know almost nothing about them.

Of course, all conclusions in science are provisional. Dark matter might someday be replaced by a different concept that explains results better. So might electrons, although that would be much more surprising. In either case, though it isn’t true that the name is just a placeholder because we don’t know what it is.