I know because Darwin just FReepmailed me.

Didn’t the Viking kitties give him the “zot!” long ago?

Back with a new screen name.

Darwin was a religious man who was greatly troubled by his scientific conclusions. He carried the conflict to his grave.

According to evolution, man would have evolved from something similar to apes. Not apes themselves.

“According to evolution, man would have evolved from something similar to apes. Not apes themselves. “

A branch that occurred over 7 million years ago.

He came up with a theory. Big deal.

But why were others pushing it, as the only true explanation for mankind’s existence?

Darwin is a monkey wrapped in a rabbit inside an insect.

Darwin did not come up with the theory. It has been around in some form since at least the ancient Greek era.

His claim to fame was that he formulated it in a way that was more useful and more in alignment with observed data than other versions of the theory.

And I am surprised that he is talking to anyone these days.

“I believe that a lack of humor is the beginning of an emotional disability.”

“Darwin was a religious man who was greatly troubled by his scientific conclusions. He carried the conflict to his grave.”

Actually the conflicts had little to do with his scientific work. Mostly, he could not resolve the morality of the Christian dogma.

Not any “currently existing” apes, I guess. The old question goes “If man evolved from apes, why are there still apes?”. It’s like asking “Why was the flag on the moon waving?”. It wasn’t.

Charlie hasn’t been himself since the Mormons baptized him ...

Interesting, thanks. That’s not what I recall so I’ll put it on the research list. ;) 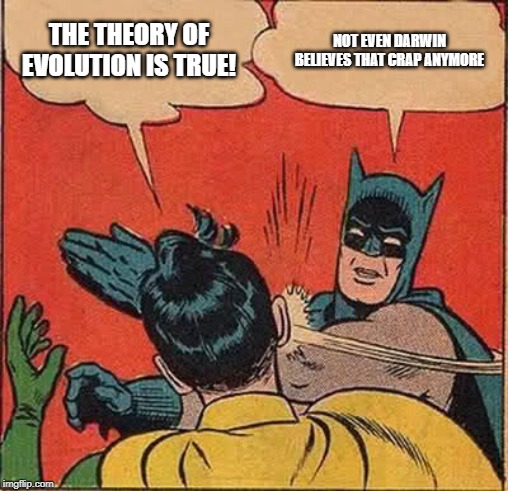 A story often circulates that suggests Charles Darwin, on his deathbed, recanted his theory of evolution and repented of the damage that he, and it, had done. The story affirms that Darwin died believing in God and salvation through Christ. Is this true?

For many years, such a story has been circulated. It frequently appears in church bulletins, almost always under the byline of one of those three famous writers of our generation: “Mr. Selected,” “Mr. Anonymous,” or “Mr. Copied.” No doubt those who propagate the story mean well. But, regardless of their good intentions, or the sincerity of their motives, they are wrong. The story surrounding Charles Darwin’s alleged repentance simply is not true. And unfortunately, it is not just this story that makes the rounds. There are other “newsworthy” items that are published—again, no doubt by well-meaning people—which are just as false. Two come to mind: (1) the story of how IBM scientists are supposed to have discovered a scientific reason for the “long day of Joshua” in the Old Testament; and (2) the account of how Madalyn Murray O’Hair allegedly threatened to have all religious broadcasting taken off the airwaves in America. Neither of these stories is any truer, nor any more founded in fact, than the story of Charles Darwin’s repentance.

The story that is told so often—and there are almost as many versions of it as there are storytellers—goes something like this. A certain friend of the Darwin family, Lady Hope, was herself a Bible believer. On occasion she found herself in the company of Mr. Darwin. One such occasion happened to be during a beautiful autumn, just a few days before his death. At that time, so the account goes, she found him reading, somewhat to her surprise, the New Testament book of Hebrews. Upon further inquiry, Darwin began to speak about how he was so very young when he formed his ideas of evolution, and how he regretted that so many people had made those ideas their religion. He then insisted that Lady Hope return to his summerhouse that afternoon, at 3:00 pm, to read from the Bible to his servants, and nearby villagers. When she asked exactly what Darwin thought she should read, he is alleged to have turned to her with an emphatic voice and said, “Read about Christ and His salvation!” Lady Hope, so says the tale, quickly spread the good news that Darwin, now on his deathbed, had become a believer in God, and a Christian.

As with all spurious dramas such as this, it is impossible to trace the origin of this story. The search hardly is made easier when time after time the story is reprinted, attributing it only to “selected,” “anonymous,” or “copied.” But on rare occasions the story, in reprinted form, actually has been attributed to an American journal published in years gone by, The Watchman Examiner. However, a search through all available issues of that publication has provided neither the original account nor any references to it. Similarly, on occasion the story is attributed, in reprinted form, to a book by Luther Townsend, The Collapse of Evolution, but that, too, has proved to be elusive. In short, each time a search is made for any kind of original documentation, it ends in the proverbial “dead end.” This alone should make the honest inquirer a bit suspicious. Were that the end of the matter, suspicions might be afforded the benefit of the doubt, and the account accepted as true. However, there are other data that, considered collectively, expose the dubious nature of the story—in any form.

First, out of a sense of fairness, let me state that there really was a “Lady Hope.” Malcolm Bowden, in his book, The Rise of the Evolution Fraud, provided documentation from Mr. L.G. Pine, former editor of Burke’s Peerage in Great Britain, of the existence of Lady Hope (1982, p. 189). And, admittedly, she lived in England at the same time as Darwin. However, the mere existence of such a woman, in proximity to Darwin, does not establish the veracity of the story under consideration. Other factors must be taken into account as well. One such factor comes from the daughter of Charles Darwin himself. Around 1842, Darwin’s wife Emma gave birth to their daughter, Henrietta. Eventually, she married an English barrister by the name of Richard Litchfield. Apparently, even before her death the story of her father’s conversion at the hands of Lady Hope had begun to circulate, because she addressed this matter in a letter written on February 23, 1922 to The Christian, a religious journal. Her comments were as follows:

I was present at his [Darwin’s—BT] deathbed. Lady Hope was not present during his last illness, or any illness. I believe he never even saw her, but in any case she had no influence over him in any department of thought and belief. He never recanted any of his scientific views, either then or earlier. We think that story of his conversion was fabricated in the USA. In most of these versions, hymn singing comes in and a summerhouse where the servants and villagers sang hymns to him. There is no such summerhouse and no servants or villagers ever sang hymns to him. The whole story has no foundation whatsoever (see Hawton, 1958, p. 4).

Some supporters of the idea of Darwin’s repentance might suggest that his daughter Henrietta would not wish the story to be known even if it were true, and therefore may have distorted, or falsely presented, the facts of the matter. While at first glance this might seem a possibility, other factors militate against such a conclusion. In order to hold to the truthfulness of this story, one would, in essence, have to call Darwin’s daughter an outright liar. Such a charge would be very difficult to sustain for several reasons. First, she was with her father at his death. But to the best of our knowledge, there is absolutely no evidence that Lady Hope ever visited Darwin toward the end of his life. Second, those closest to Darwin at the time of his death knew nothing of his alleged conversion. Third, the story of that supposed conversion did not begin until years after his death, which hardly seems likely if the story is true—and known to be so by those whose lives were intricately intertwined with Darwin’s.

Also to be considered is this: many of the “facts” of the Lady Hope story are, quite simply, wrong. For example, Darwin died April 19, 1882. But the story of Lady Hope specifically states that she visited him on a beautiful autumn afternoon. That would have left six months between her visit, and his demise. Yet evidence available to us proves beyond the shadow of a doubt that Darwin was neither bedridden nor “on his deathbed” during that six-month period. Also, the story indicates that Lady Hope came to speak, at Darwin’s request, at the summerhouse on his property. Yet as Darwin’s daughter pointed out, there was no such summerhouse. Further, the story has Darwin opining to Lady Hope that he formed his thoughts on evolution when he was but “a young man with unformed ideas.” This makes little sense, because when Darwin finally published the Origin of Species, he was 50 years old! This hardly qualifies him for being a “young man.” The Origin of Species underwent no less than six revisions from 1859 until 1872—and each one was at the hand of Darwin himself. So the suggestion that a “young man with unformed ideas” was responsible for the Origin, and the concepts contained therein, simply will not withstand intense examination.

There are many more data available that establish the conclusion that the “Lady Hope” story is false. Wilbert H. Rusch and John W. Klotz have summarized them in their excellent work on this subject, Did Charles Darwin Become a Christian? (1988). The reader is referred to that volume for an in-depth examination of those data, which are far too numerous to reproduce here.

Did Darwin repent? Did he become a believer in God, or a Christian? The answer to both questions is a resounding “no.” Creationists and Christians do themselves no favor by circulating, even if inadvertently through good intentions, stories such as these that ultimately are without foundation.

When the truth finally does come out (and eventually it will!), it reflects poorly on those who propagate such falsehoods. While there are many legitimate, valuable tools in the arsenal of the Christian apologist, such stories as the one reviewed here are not among them and should be avoided at all cost. If you should see this story reappear in the future, please take occasion to share this material with those who are telling it. There is enough false material being circulated without Christians fueling the fire with more.

Bingo. I was about to post the same thing. Darwin theorized that humans and other primates share a common ancestor.