No one would argue that earthworms are cute. But to most people, they are benign and helpful creatures — fertilizers of the garden, aerators of the soil, indispensable fishing companions. "Earthworms are truly nature's little farmers," goes one common view, this one on the Web site of Agriculture and Agri-Food Canada, "plowing the soil and fertilizing at the same time!"

But for a growing body of researchers, the traditional view of earthworms is giving way to a much more ominous one. Most earthworms common in the United States are exotic intruders from Europe, Asia or South America, these scientists point out.

Their research suggests that earthworms become voracious and destructive when they invade forests, often in ever-widening circles around ponds — where for decades fishermen have been dumping unused worms in the mistaken belief that they help the ecosystem.

Now, scientists are mounting a counterattack. At the end of this week, two dozen biologists from the United States, Puerto Rico, Canada and Russia will gather in Athens, Ga., to outline the earthworm problem and propose solutions. They expect to plan papers for presentation next summer at an international conference on soil zoology in Rouen, France, and they hope to sound a warning for soil researchers.

Nobody is proposing to remove earthworms where they are already established. That would be daunting, or impossible, said Dr. Paul Hendrix, a professor at the Institute of Ecology at the University of Georgia and the organizer of the conference. But it may be feasible, he said, to shield other areas.

"I like to see pristine areas that have not yet been invaded," he said. "Seems like there's some intrinsic value in having those around, if we can."

Scientists believe that earthworms were once native to North America, but most died off when the northern half of the continent was buried under glaciers.

Small populations lingered in pockets of warmer soils, in the southeastern United States and along the Pacific Coast. Now most earthworms in the country are descended from immigrants.

When the worms first arrived is hard to say, but scientists think they may have followed Europeans. Wherever humans have worked the soil, Dr. Hendrix said, exotic earthworms have been introduced.

And they are still coming, as stowaways in plants and other soil-containing materials; people have brought them on purpose for waste-management and bioremediation projects. The biggest commercial application by far is fishing bait; Canada exports $20 million worth each year for fishhooks.

One presenter at the Georgia conference will be Cindy Hale, a doctoral candidate at the University of Minnesota at Duluth who has written her dissertation on exotic earthworm invasions in sugar maple forests. Ms. Hale said that in soil squeezed and pounded by cultivation, worms can indeed help aerate the ground by burrowing. Their digestive processes break down nutrients, making them more accessible to growing plants.

But those same actions can damage pristine ecosystems. In some cases — when earthworms' droppings are denser than soils — the worms can actually compact the forest floor.

The invasions have another particularly severe effect on the ground. Normally, fallen leaves make a thick, spongy carpet that is crucial to the forest. The leaf litter serves the forest as both insulation and as a storage system. It teems with the micro-organisms that will break down fallen leaves and other organic matter into the fertilizer that will foster new growth in the spring.

But invasive worms eat away the leaf litter and change the chemical and biological properties of forest floors, to the point that some native plants can no longer live there, according to Ms. Hale and other experts.

Ms. Hale speaks from experience. "I started a worm farm when I was a kid at my house," she said. "Now our oak woods is nothing but buckthorn."

Like them, buckthorn is an invader, and it lives where worms have made the conditions right.

The problem goes far beyond Minnesota, experts say. Michael Gundale, who is now pursuing a doctorate at the University of Montana, wrote his master's thesis at Michigan Technological University about invasive worms' effects on the rare goblin fern in northern hardwood forests.

He found that at least one species of the worm grazes on fungus associated with the fern's roots. The fungus and the roots normally engage in an underground partnership to improve the pull of water and nutrients from the soil.

Without the fungus, the plant loses a biological edge. Mr. Gundale suspects that the worms' presence will push the fern toward extinction.

Beyond northern hardwood forests, ecologists at the University of Calgary have shown that worms change underground insect communities in the lodgepole pine forests of southwestern Alberta. Habitat changes have also been reported in Kansas tallgrass prairie, Southern California chaparral, and temperate forests in New York and New Jersey.

Until recently, regulators in the United States have seen little reason to care about earthworm invasions. The Agriculture Department, which is charged with protecting natural resources from exotic pests and diseases, has traditionally considered worms innocent until proved guilty. They are still not viewed as plant pests, said Meghan Thomas, a spokeswoman for the department's Animal and Plant Health Inspection Service.

But that may be changing. Dr. Hendrix said he knew the government was starting to pay attention to earthworms when the Agriculture Department awarded him a small grant to publish an inventory of the effects of earthworms across the country in a 2002 issue of the journal BioScience.

Recently he secured a grant from the National Science Foundation for a new area of earthworm research: how native worm species are affected when exotics are introduced. He plans to set up experiments in Oregon, Florida and North Carolina.

Dr. Hendrix is part of a small corps of earthworm researchers who have been meeting every four years since the 1970's. The 200-member group, the International Symposium on Earthworm Ecology, agreed last year to form a panel to address the earthworm invasion in North America. The panel's first meeting will be this week at the conference.

Beyond public education campaigns, efforts to contain the spread of earthworms could prove politically daunting. Such a crusade might mean, for instance, that drivers would have to rinse their off-road vehicle tires before traveling into wilderness areas to safeguard against moving worms. Dumping unused fishing bait could become a criminal act. Dr. Hendrix, for one, said he did not know how far those kinds of rules could go. 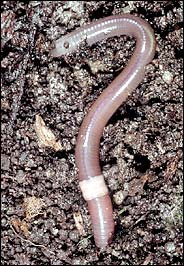 Most of North America's native earthworms were killed thousands of years
ago when the northern section of the continent was covered by glaciers,
scientists say. Now, new research suggests that earthworms,
many of them immigrants from Europe, can become destructive when they
invade forests. Biologists are meeting this week in Athens,
Ga., to address the problem and the possible solutions.
1 posted on 10/28/2003 6:57:48 AM PST by presidio9
[ Post Reply | Private Reply | View Replies]
To: presidio9

The sub-heading is mine. It just amuses me that the liberal hand-wringers at the NY Times can not be truely happy unless they come up with a new end-of-the-world scenario each and every week for their Science Times section on Tuesday. Want to know why earthworms will not be taking over the world any time soon? They have become the primary foodsource for much of our indigenous wildlife.

There is no such thing as a "pristine" ecosystem. All ecosystems constantly undergo change. The most harmful thing I can imagine an ecosystem undergoing is being frozen in time and not allowed to change. So guess what most "environmentalists" are trying to do?

6 posted on 10/28/2003 7:09:00 AM PST by Snuffington
[ Post Reply | Private Reply | To 1 | View Replies]
To: presidio9
worms can indeed help aerate the ground by burrowing. Their digestive processes break down nutrients, making them more accessible to growing plants. But those same actions can damage pristine ecosystems

7 posted on 10/28/2003 7:09:19 AM PST by Lil'freeper
[ Post Reply | Private Reply | To 1 | View Replies]
To: presidio9
efforts to contain the spread of earthworms... drivers would have to rinse their off-road vehicle tires before traveling into wilderness areas to safeguard against moving worms. Dumping unused fishing bait could become a criminal act.

Do I smell an Enviromentalist agenda here?

Fancy that: earthworms cause global warming!!! Those must have been some nasty worms to destroy an oak forest in just a few decades. And it was all because of that worm farm she had as a kid. What a crock of worm food.

Ms. Hale speaks from experience. "I started a worm farm when I was a kid at my house," she said. "Now our oak woods is nothing but buckthorn."

Thank goodness this woman gets off on earth worms. With a mind like that, God forbid she be put in charge of something important.

16 posted on 10/28/2003 7:36:08 AM PST by upchuck (Encourage HAMAS to pre-test their explosive devices. A dud always spoils everything.)
[ Post Reply | Private Reply | To 1 | View Replies]
To: eggman
Glad to see someone is putting their foot down.
17 posted on 10/28/2003 7:39:30 AM PST by Eric in the Ozarks
[ Post Reply | Private Reply | To 15 | View Replies]
To: Gritty
...drivers would have to rinse their off-road vehicle tires before traveling into wilderness areas to safeguard against moving worms. Dumping unused fishing bait could become a criminal act.
Count the BAD words...
drivers      : highway deaths - added air pollution
rinse        : improper disposal of possibly detergent laden wastewater
off-road     : damaging to the eco-system
vehicle      : added air pollution - lack of exercise - obesity
tires        : disposal problems - west nile breeding ground
traveling    : waste of needed resources
wilderness   : where the animals ONLY should be
fishing bait : inefficient use of time and labor -
unethical removal of free-ranging lifeform -
possible death of endangered specie by hooking wrongly
18 posted on 10/28/2003 7:48:13 AM PST by Elsie (Don't believe every prophecy you hear: especially *** ones........)
[ Post Reply | Private Reply | To 8 | View Replies]
To: presidio9
Earthworms (Minnesota DNR) (good comparison pictures of altered forest)