Navigation: use the links below to view more comments.
first previous 1-20, 21-30 last
To: Rurudyne

That is why I, with backgrounds in both biology and theology, have never been more than passingly interested in ID (just as I am not particularly interested in Evolution).

21 posted on 12/21/2018 3:40:54 PM PST by YogicCowboy ("I am not entirely on anyone's side, because no one is entirely on mine." - J. R. R. Tolkien)
[ Post Reply | Private Reply | To 5 | View Replies]
To: Bishop_Malachi; who_would_fardels_bear; spirited irish
Bishop_Malachi: "There are natural laws that God has established to make the universe orderly and predictable for the benefit of all species.
This in no way violates the principle that God can choose to direct the universe from time to time towards goals that fulfill God’s plan.
There’s just nothing necessarily contradictory..."

Right, well said.
I would further suggest: the "natural realm" is in fact far more miraculous than "science" writ-large understands or wants to admit.
Sure, science discovers some principles or theories which seem to predict this or that, but why?
What (or Who?) created the theory, and what created that?
Ancient philosophers realized where such reasoning lead but modern science is built on the first principle of only natural explanations need apply for work here.
Well, a child can see that only natural explanations don't explain everything, so many years of atheistic training are needed to disabuse such ideas...

This article proclaims theistic evolution "bankrupt", but reality is still what Isaac Newton observed, circa 1726: 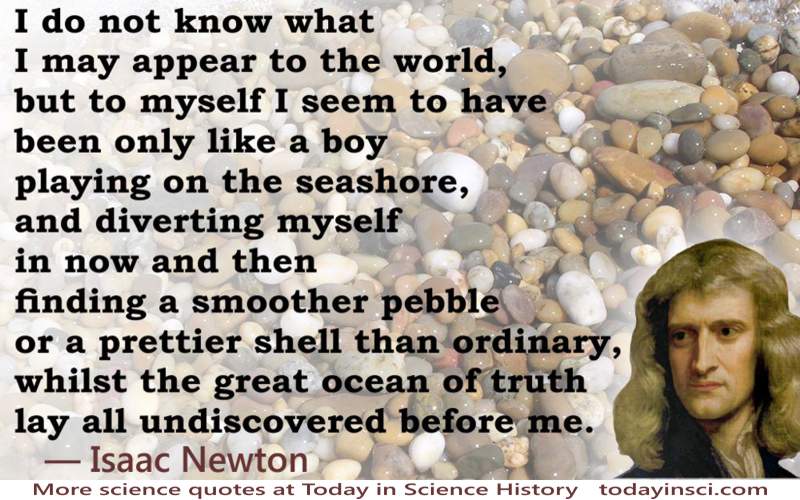 22 posted on 12/22/2018 9:19:41 AM PST by BroJoeK ((a little historical perspective...))
[ Post Reply | Private Reply | To 8 | View Replies]
To: Rurudyne; YogicCowboy; spirited irish
Rurudyne: "Philosophical Naturalism, or the belief that all that we see must be explained only in terms of processes arising from within the system, is not scientific proposition as it is not testable.
Rather it is a belief asserted about the first causes of things and it is further one that has developed very dogmatic consensus."

Some people devote themselves to denying a distinction between your "philosophical naturalism" and the basic scientific assumption of "methodological naturalism".
But the enterprise of natural science does not itself deny the existence or influence of God, only posits that science cannot study such matters.
Natural science happily leaves the inquiry to other disciplines, especially theology and philosophy.

The natural science of our Founding Fathers and the Age of Enlightenment was built on the assumption of virtuous inquiry into nature as "the mind of God".
Only generations later did some people begin pretending there was no "Mind" to discover, just... well... random, nothing. Your argument here is like criticizing a saw because it’s not a hammer.

Or like saying we didn’t give up after the Germans bombed Pearl Harbor.

Tell that to Lawrence Krauss.

Obama supporter & friend to Richard Dawkins plus the late Christopher Hitchens, Krauss is an atheist, or "philosophical naturalist" in scientific terms.

When people like Krauss tell us there is no God, that's their religious belief, not science.
I also note that Krauss is a string-theory skeptic, meaning he admits there's no physical evidence to support such ideas.

27 posted on 12/23/2018 10:16:01 AM PST by BroJoeK ((a little historical perspective...))
[ Post Reply | Private Reply | To 26 | View Replies]
To: BroJoeK
You have misinterpreted my post. My claim is that all attempts to explain how we are here have issues which we puny humans have not yet fully worked out.

The materialist theories that people like Krauss support are just as fraught with difficulties as the theistic theories.

Yes, Krauss has created a sort of religion because he has faith without proof that the universe consists only of matter and energy.

This notion that people have that science and religion can somehow be separated into their respective areas of expertise is bogus. Scientific atheists certainly don't buy it. They are trying to develop a Theory of Everything, not a Theory of Everything Material. And religious folks realize that the pursuit of science depends entirely on ethical decisions that can only be justified by philosophical claims that tend to lead toward a belief in the supernatural.

Sorry, I was never good at code-breaking.

who_would_fardels_bear: "My claim is that all attempts to explain how we are here have issues which we puny humans have not yet fully worked out."

who_would_fardels_bear: "This notion that people have that science and religion can somehow be separated into their respective areas of expertise is bogus.
Scientific atheists certainly don't buy it. "

Atheists simply deny there is a supernatural realm.
My opinion is that overlooks a huge portion of what we call the "natural realm".

Of course, if you are an atheist those are the same thing.

who_would_fardels_bear: "And religious folks realize that the pursuit of science depends entirely on ethical decisions that can only be justified by philosophical claims that tend to lead toward a belief in the supernatural."

Agreed, but I'd grow further and admit there's a lot more of the supernatural in what we often think of as "natural realm".

The author states, “they push God into the distant and undetectable cosmic background so that the universe only looks random (but isn’t).”

Quite to the contrary, theistic evolution begins with the observation that the universe in no way looks at all random, and directly rebuts the mental sleight-of-hand of Stephen Hawkin’s infinite universes, required to sustain the “infinite number of monkeys would type Shakespeare” analogy.

Given that this intellectual deceit is the basis of his book, I can’t imagine the book having anything useful to contribute to any conversation, other than inspiring his readers to cover their ears.