The Next George Bush Bet Everything on Trump In a time of outsider politics, can the ultimate insider resurrect his family’s brand?

But how does one sell the party of Trump to communities he’s repeatedly disparaged? On immigration, Bush claims that the challenge isn’t one of substance. “It’s the tone that is not working,” he said, adding that “Texas wants the national government to come forward with solutions,” such as “supporting Border Patrol,” “strategically located physical structures,” and a plan to deal with people who have overstayed their visas, which Bush feels is “the most overlooked issue.”

But however much Bush adjusts his own tone, or focuses on advancing reasonable policies, he’s still tied to the president—and he still feels he needs to be. This helps explain his often awkward dance over the past two years. How he endorsed Trump in 2016, but rarely utters his name. How he joined members of his party in denouncing the “liberal fake news,” but spoke up when they villainized a Muslim party official. How Bush repeatedly described to me significant differences of opinion with Trump—he called NAFTA the “most important free-trade agreement in Texas state history,” and said John Kelly’s and James Mattis’s departures from the administration were a threat to its “stability”—but said he does not support a primary challenge to Trump “right now.”

Perhaps Bush’s seesaw approach to the president will be enough to secure his next office. Or perhaps Trump’s Texas base will continue to grow more fervent, at the same time that Democrats continue to mobilize millions of voters. In that case, Bush’s future may be determined not by his ability to bridge the political chasm, but by his willingness to pick a side.

Bet everything on Trump? George P didn’t seem that into Trump according to the last 3 paragraphs.

There is no way any of the bush clan support Trump in any way.

“Daddy is a smoldering wreckage. Better be nice to this guy.”

Really not much more complicated than that.

PLEASE, Texas, DO NOT elect George P. Bush to anything else.

George P. Bush is likely the reason the GOP went along with the Kenyanesian Usurpation.
He is as ineligible as the Kenyan from Indonesia.

George P. Bush is trying to fake like he supports Trump only to insure his electoral survivability.

The most important thing to ALL Bush League Republicans is completing the GHW Bush Plan for North Mexico (aka USA) with amnesty for those already here.

(the very thing that Trump was elected to stop)

Bush had a mandate and money to build a wall and did nothing because he wanted amnesty. Shut up George.

He said his father understood. “To be honest with you, I think he took it a little easier than the rest of my family … My uncle, though—that did require a sit-down.” He delivered the news in the library of the 43rd president’s home in Dallas, whereupon his uncle expressed concern that the endorsement could be “a short-term gain for a long-term cost.”

W, you dissapoint me long-time.

No more Bushes. No more Clintons. Ever.

President Bush.... either go all in in support for President Trump or just shut the hell up and stay in Waco. Now his not the time for wishy-washiness.

13 posted on 04/15/2019 1:52:58 PM PDT by Rummyfan (In any war between the civilized man and the savage, support the civilized man. Support Israel.)
[ Post Reply | Private Reply | To 1 | View Replies]
To: conservative98
The latest George P. Bush news from a couple days ago is that he is demanding the removal of all Confederate monuments and statues in the state of Texas. G. P. Bush is vicious venomous snake being groomed for bigger things by his globalist clan.

Stay out the Bushes!™

I don't know how it would affect his political aspirations going forward. I'm surprised it hasn't dogged him during his political career.

In the article there are links police documents. It appears they are no long available:

So George P. Bush--son of Jeb and the political dynasty’s fourth generation standout--is making his Washington, D.C. debut this week. The 37-year-old lawyer is now running for Texas land commissioner, but his family reportedly expects bigger things from the telegenic offspring of the former Florida governor.

Which is as good an excuse as any to revisit a police report detailing George P.’s creepy, stalkerish behavior towards a former girlfriend.

Back when he was a Rice University student, Bush was investigated for burglary and criminal mischief related to a 4 AM visit to the Miami home of his ex, Cristina Cohen, and her parents.

A Miami-Dade Police Department report includes an account of the December 31, 1994 incident provided to cops by Murry Cohen, Cristina’s father.

According to Cohen, Bush--wearing black shorts and no shirt--arrived at the residence and “went to his daughter’s bedroom window,” pulled it open, and “pushed the screen inward.” As Bush was “climbing in the window,” Murry Cohen awoke and spotted the trespasser. A neighbor of the Cohens also spotted Bush trying to get into the residence and began to argue with him.

With his intrusion thwarted, Bush “backed out of the window.” Cohen reported seeing Bush then “jump into a vehicle and flee.” But he would not be gone for long.

Bush returned to the home 20 minutes later and drove his car through the Cohens’s yard, causing damage to about 80 feet of the lawn.

When police arrived at the residence, the Cohens identified Bush as the perpetrator. Cristina Cohen explained that she used to date Bush, but that they “have been separated for 1-1/2 years.” She added that Bush “has been a problem ever since they broke up.”

After the Cohens provided police with Bush’s home address, an officer went to the residence and “spoke to him and parents.” But since Murry Cohen did not want to press charges, Bush “was not arrested on the scene,” according to the police report.

When police checked back with Cohen several days later, he told a detective that he was not interested in pursuing charges against Bush, “and that he wanted the matter resolved.” Cohen then signed a non-prosecution form.

George P. Bush’s campaign web site describes him as “part of the next generation of Texas leaders…a successful businessman, philanthropist, civic leader and veteran dedicated to advancing conservative values.” The married Fort Worth resident and his wife are expecting their first child this summer.

If the f’in Bushes keep this up, they are going to drift into Tlaib/Omar country.

To the Bushes: Just shut up already.

Nobody in either party wants to hear your silliness now.

No more Bushes! No more Clintons! No more Kennedys! 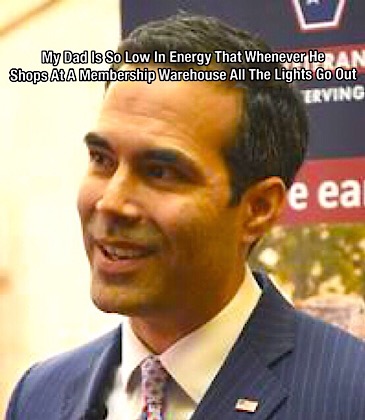