A Platte County Elementary school principal is on leave because of tweets on his personal account responding to a call for federal funding of gun violence research, Platte County School District spokesperson Laura Hulett said Thursday.

Chad Searcey, principal of Compass Elementary school, was placed on paid administrative leave immediately after the district learned of the tweets on Wednesday. The social media posts were made on Tuesday, according to a news release.

“We understand why the public response has been strong with regard to student safety in our nation’s schools,” the release said. “We intend to address the situation immediately and in a manner consistent with our Board of Education policies, as well as our goal of ensuring a safe and caring environment for our students, staff, and community.”

In his response Searcey posted three photos of men and children with guns, #Merica is written on one photo, according to the screen shots.

TOPICS: News/Current Events; US: Kansas
KEYWORDS: davidhogg; guncontrol; hogg; hoggwash; parkland Navigation: use the links below to view more comments.
first 1-20, 21 next last
Tweets at link
1 posted on 06/13/2019 6:18:14 PM PDT by yesthatjallen
[ Post Reply | Private Reply | View Replies]
Thanks so much for your support to this point... I personally apprecaite it...
FReepers, it's far beyond time to wrap up this FReep-a-thon.  Lets do it today.  Please chip in.

FReepers, 98.183% of the Second Quarter FReep-a-thon goal has been met.  Click above and pencil in your donation now.  Please folks, lets end this FReepathon.  Thank you!
...this is a general all-purpose message, and should not be seen as targeting any individual I am responding to...

It’s June 2019 and people are still responding to Hogg on Twitter like he’s super important and it’s still early 2018 and the mainstream media won’t shut up about him? I forgot he existed before this thread... 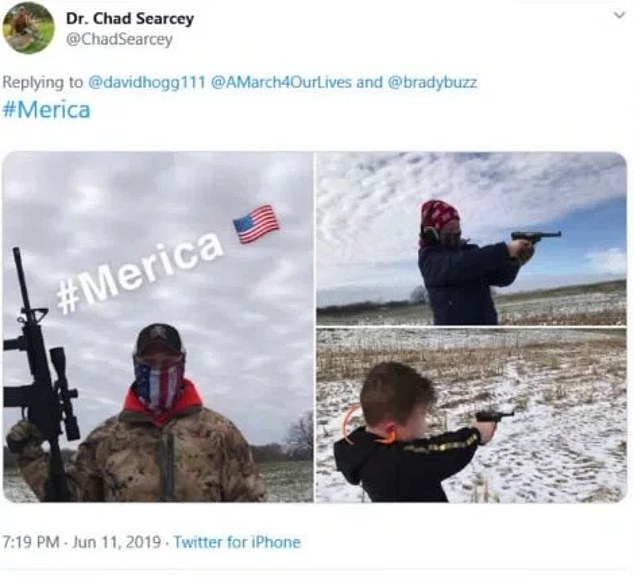 Hogg wasn’t at the school during the shooting. We both have that in common!

Social media WILL be used against you if you voice conservative thoughts.

6 posted on 06/13/2019 6:22:49 PM PDT by Smellin Salt
[ Post Reply | Private Reply | To 1 | View Replies]
To: yesthatjallen
A Platte County Elementary school principal is on leave because of tweets on his personal account

I don't think any Twitter account is really personal, which is partly why I don't have one.

Sounds like discrimination based on political views to me. I wonder how much money he can make the district spend on legal fees?

So Hogg harasses victims and people on the job exposed and it is the people who are harassed who get fired for responding?

Yeah, this would need a big lawsuit of discrimination

Never argue with an idiot. He can’t lose (he’s an idiot). You can’t win, he’s an idiot and you gave him the recognition. When you get done with a pig and lipstick, you have a pig that can’t dance and still need a prom queen. The pig does look better but still can’t dance. Geeesh

Calling Hogg a "survivor" and using him to promote gun control is tantamount to having a "9/11 survivor" paraded around on the media pushing for renewal of the PATRIOT Act, except then you find out the supposed survivor was not actually at the World Trade Center or anything, he was just in New York City on the day of September 11, 2001, nothing more. It feels very disingenuous to me personally.

From what I’ve read, Hogge wasn’t even at the school at the time of the shooting. Therefore HE IS NOT A SURVIVOR. Leftist news media promotion of a hardcore leftist opportunist and tragedy vulture.

Disassembly is not the problem. I wonder how many are parts in drawers. after disassembly. Just waiting for someone who knows to put them back together.

I never had too much of a problem reassembling my Ruger Mk III after cleaning. I just got a Ruger Mk IV Competition and it’s incredibly easy to take apart and put back together.

And social media claims another one.

I don’t know what your complaint is. I’m a survivor! I was in Virginia at the time of the shooting and damned if I didn’t survive!