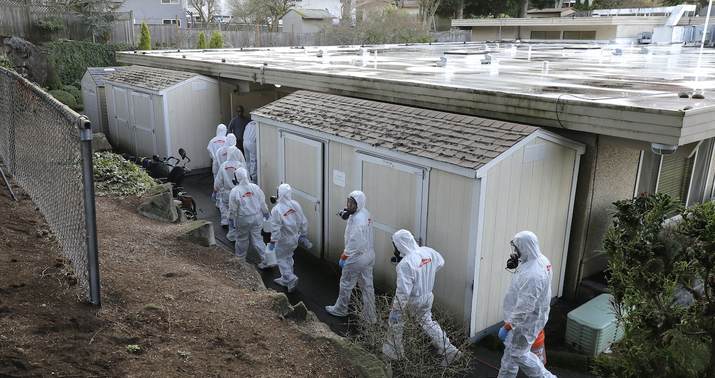 I remember a researcher who’s tracking the genomes of strains in the Seattle area saying earlier this month, “January 1 in Wuhan was March 1 in Seattle.” Washington state could experience the same disaster that China did, he said — if nothing was done urgently to mitigate the disease’s spread. But something was done. Seattle was among the first places in the U.S. to encourage stringent social distancing.

Result: Wuhan had to be locked down on January 23 in an urgent attempt to stop the virus’s spread. Whereas Seattle is now 29 days removed from March 1 and the contagion has slowed, based on the available (and incomplete) evidence. Hospitals there aren’t overrun. There’s no Wuhan scenario brewing for the moment. And there might not be one if people there continue to hunker down this month.

How easily can Seattle be replicated elsewhere, though?

Deaths are not rising as fast as they are in other states. Dramatic declines in street traffic show that people are staying home. Hospitals have so far not been overwhelmed. And preliminary statistical models provided to public officials in Washington State suggest that the spread of the virus has slowed in the Seattle area in recent days.

While each infected person was spreading the virus to an average of 2.7 other people earlier in March, that number appears to have dropped, with one projection suggesting that it was now down to 1.4…

With so many states now deep in crisis, the signs of provisional success in the Seattle area offer a lesson for other cities and regions that are just beginning to see the onset of the coronavirus: Early and aggressive action to contain the spread may help lower the trajectory of a virus that could otherwise overwhelm health systems.

Here’s what King County, Washington, looks like today on the Kinsa “health weather” map. This evidence is circumstantial — it tracks all fevers, not coronavirus infections — but the trend is in the right direction:

The key words in the excerpt above are “early and aggressive.” New York City is also trending downwards in fevers per the Kinsa data but it’s come too late there to avert a catastrophe. It’s likely too late for Florida as well, where scientists are predicting “a huge public health crisis” thanks in part to Ron “Spring Break” DeSantis not acting early and aggressive enough. Other states that momentarily find themselves at a fork in the road about whether it’s “too soon” to act — ahem — might profit from the contrast between Washington state’s trajectory and those in New York and Florida.

But again, are Seattle’s numbers so easily explained? The Times story points to quirks in the city’s culture that might make it more able to practice social distancing than other parts of the country. It’s a tech hub, which means many workers there can easily work remotely from home. By chance, it had a team of researchers already in place, the Seattle Flu Study, tasked with studying viral epidemics that was able to switch its efforts quickly to tracking coronavirus locally. (The first solid circumstantial evidence of community spread in the U.S. was identified by a Seattle researcher.) And, weirdly enough, apparently Seattleites are known for being … not particularly social, especially with newcomers to their city. I’d never heard of the “Seattle Freeze” before reading this story but it apparently is indeed “a thing,” as the kids like to say. If it’s true that locals there are a little more socially distant even under normal circumstances than they are in most American cities then it stands to reason that COVID-19 wouldn’t transmit quite as aggressively.

There’s another story of social-distancing success on the wires today but I don’t know how replicable that is either. Remember that one-mile “containment zone” that Andrew Cuomo ordered for a hot spot in New Rochelle? Locals were able to go in and out, but teams of medical workers were sent in to test residents aggressively for coronavirus while the National Guard was tasked with deep cleaning spaces and handing out food. Three weeks later, New Rochelle appears to have flattened the curve too as nearby NYC is exploding with infections. Residents have become true believers in social distancing — and widespread testing:

“In the beginning, it felt like house arrest,” said Samuel Heilman, a New Rochelle resident whose family was among those ordered to self-quarantine on March 3. The families had all attended the same synagogue, Young Israel of New Rochelle, as a lawyer who was the first person diagnosed with the coronavirus in the community.

“In effect, it felt like we were being punished,” Mr. Heilman said. “But the punishment turned out to be a blessing in disguise. This is really a case of perspective.”…

Westchester County has adopted an aggressive testing philosophy: More than 29,000 of the county’s less than one million residents have been tested, according to the county Department of Health, with 7,187 positive for Covid-19 as of Friday. Statewide, about 138,000 people have been tested.

NYC has eight times the population of New Rochelle but has done only twice as many tests. Over the past four days, there have been just 38 new cases in New Rochelle. All we need to do now is set up a containment zone for every hot spot in America and test the hell out of them to determine who’s sick and needs to self-quarantine and who isn’t. Piece of cake.

Or, alternately, we could be disciplined this month about social distancing. Which not all of us are being:

Of the 4800 flights we're currently tracking worldwide, two-thirds are seen in this image.

Normally, we would be tracking about 13,000 flights right now.

One more data point for you and everyone else who might be in a state right now, like Arizona, that’s taking its time to close down big gatherings:

As of March 27th. Governor @AndyBeshearKY announces KY residents should avoid traveling across the border unless essential. University testing continues in both states: KY reporting + only; TN reporting + and –

Click on the image in the tweet to enlarge it, and note the difference on when schools were asked to close. It’s only a few days, but a few days is all it takes to make a difference with something that grows exponentially.

I’m curious to see down the road what sort of political consequences there are or aren’t for governors who moved quickly to shut down schools and businesses versus those who let life go on a bit longer in the name of keeping the economy moving. Will the backlash or lack thereof depend entirely on how severe the outbreak in that state ends up being? Can someone like DeSantis escape accountability by blaming other states for his problem, e.g. heavy travel from New York to Florida? There may be such a fog of recriminations in the aftermath that it becomes impossible for the average voters to know whether their own officials screwed up massively or whether there was nothing they could have done to prevent it thanks to irresponsible foreigners — the Chinese, New Yorkers, whoever — seeding outbreaks everywhere they went. Each side will be pointing fingers at the other. Well, except in the case of Bill de Blasio, whom all right-thinking people agree is terrible.

Update: DeSantis must be all-in on the belief that there won’t be political consequences. Otherwise this is inexplicable.

Last night Florida reported that the state has 4,246 active cases of coronavirus.

There will be many more reported tonight.

This is a photo of New Smyrna Beach this afternoon.

Why are there people there?

Because @GovRonDeSantis still won’t shut down the state.

Now all they have to do is get through the second wave when it comes in a few weeks.

New York will remain hot for quite a while. Louisiana is getting worse by the day, and Florida is starting to trend in that direction. I think Florida has the chance to really spike upward because the state is not closed down and people are still going to the beaches.

My thought as well. The folks who traveled there two weeks ago won’t contribute to the data quite yet. Seattle could get hit from both directions.

We started early, and social distancing will be the new norm up here, government required or not. I don’t expect to see the vibrant restaurant scene to return for a long time - we all worry about the second wave.

I’m pretty sure I just drove past a grammar school here in Florida Land that was in session.

I can’t say for sure if kids were there, but there were at least 50 cars in the lot.

>>I think Florida has the chance to really spike upward because the state is not closed down and people are still going to the beaches.

Not to mention the number of older retirees that live there - that could be a disaster for them.

“and people are still going to the beaches.”

You don’t get the virus at the beach.

No, but you do get the virus being in close proximity to others. Whether on the beaches, in the parking lots, or in nearby stores and restaurants, you sure as hell do.

Just my personal observation, but I drive southbound through Bellevue each week either on Thursday night or Friday night around 6:00PM (I have every other Friday off, and usually it takes about 15-20 minutes on I-405 right as you get into Bellevue as you pass the 520 off ramp. The last 3 weeks is like a ghost town. The first night I experienced this I had to slow down because there was no traffic and I was doing 70 in a 60mph zone.

It’s weird. I Have a picture on my phone I could share if I knew how to post from that.

I don’t know about south Florida but north east florida beaches were closed sometime ago. In my little place of the planet where beach going seems to be few generally inasmuch as there is little nearby parking, we have been closed for almost two weeks (Nassau County). Out of 80K residents in the county we have 8 cases, 2 hospitalized. Past rt 95 west, it is mostly a rural county.

Meh. They just moved that nursing home to New York.

14 posted on 03/30/2020 9:50:45 AM PDT by cuban leaf (The political war playing out in every country now: Globalists vs Nationalists)
[ Post Reply | Private Reply | To 1 | View Replies]
To: BuffaloJack
Now all they have to do is get through the second wave when it comes in a few weeks.

I was reading up on the Spanish Flu (1918) and was dismayed to see that it came in two waves.

The first wave in 1918 started in about Dec-Feb. It was bad and a lot of people died. Then it went away. But it came back in the fall (Oct or Nov). And the second wave was significantly deadlier. Killed millions.

I'm generally not overly concerned about COVID-19. I am one of those people who feel it's been a bit hyped. But now I'm hoping we don't see a second wave which is much worse.

It’s called common sense. Wind typically comes in off of the ocean anyway.

You don’t need data to know not to jump from a plane with a parachute. This is the most hostile environment known for respiratory type virus

Agreed, second wave is on the horizon.

Unless you make physical contact with an infected person, it is almost impossible to pick up the virus at the beach.

And, most suck people will not be going to the beach.