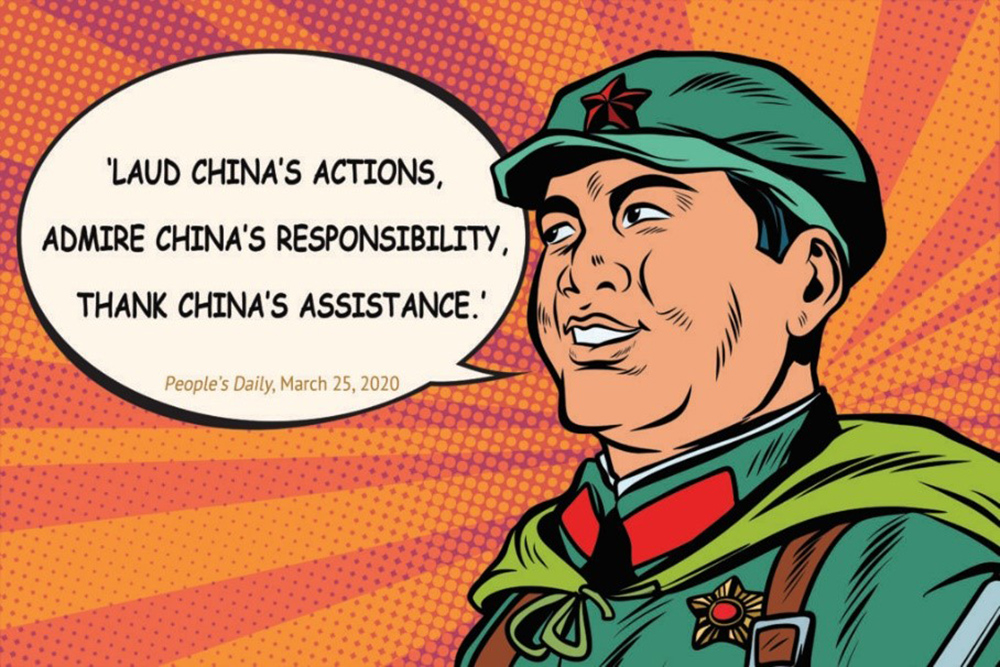 There’s an old joke about eating Chinese food that says after you’ve had a big meal, you’re hungry again a half hour later. That may be true for us but probably also for them too because the foods they have an insatiable appetite for can literally kill you. Iguanas, koala bears, pelicans, dogs, cats and especially bats. Eating bats is literally batshit crazy and harvesting bat guano (excrement) to diddle around with the viruses in their feces is probably what has put us in the two-month Corona lockdown and corresponding economic meltdown we’ve been suffering from. Covid-19 is far from the first time we’ve taken a lethal hit from China.

The 20th Century saw three flu pandemics (aside from regular, seasonal flus) originating from China. Some suspect that the 1917-1918 pandemic originated here although this can’t be conclusively proven. However, origin of the 1957-58 pandemic was most definitely from East Asia. It killed as many as 116,000 in the US out of a population 174.9 million, or nearly half the size of the today’s US population of roughly 330 million, so the proportion of those who were made ill and who perished was higher compared to today’s Covid-19. The country did not shut down even though the mortality rate was 10-times that of the 2009 Swine Flu.

I vividly recall the 1968-69 Hong Kong Flu. It hit the US in the Fall of 1968 and circulated for nearly two years. The CDC says it was an “avian influenza A virus, (H3N2)” and that killed about 100,000 in the US and a million worldwide. The US population was then 200.7 million. I was 10 in 1968 and my whole family was down with it – both my parents, myself and my younger brother. Things were so bad at home that my maternal grandmother came out to care for us. Most of the fatalities, then as now with Covid-19 were comprised of people over 65. This flu is still around today and has never been cured, just contained. The country didn’t close down even though millions were infected and made sick by it.

In 2009 we had the Swine Flu which was projected to be enormously fatal but ended up burning out earlier than expected. A vaccine was only available after the disease had peaked. From April 12, 2009 to April 10, 2010, CDC estimated there were 60.8 million cases, 274,304 hospitalizations and 12,469 deaths in the United States due to the (H1N1)pdm09 virus. The country did not shut down even though nearly 61 million Americans got sick from it.

Even though none of the aforementioned Asian flu pandemics of the 20th Century killed millions in the US by any stretch of the imagination, US health professionals opted to latch on to hysterical computer models generated in England that estimated 2.2 million people would die here without a national quarantine and lockdown. It was somehow OK for 60 million to get sick from Swine Flu with no media hysterics but not OK for millions to contract Covid-19. Why was that?

Given decades of history on pulmonary and respiratory pandemics and how they were handled here, what was the model our medical, media and political class decided to adopt? Why the Chinese model, of course. Never mind that Chinese infection numbers and information couldn’t be verified and were lied about. Never mind that China, as a totalitarian Communist dictatorship (Communism is self-defined as the “Dictatorship of the Proletariat.”) can forcibly hermetically seal a city of 11 million (Wuhan) with nary a peep of opposition or information leakage from the people; never mind that China has an extensive history of self-serving deceit and boldfaced deception both at home and abroad, never mind that the Chinese Communist Party would be delighted to see the entire economy of The West crippled or destroyed.

Why use tried and true Western models of disease management when we can ape the bat-loving Chinese? Could it be about power? Power is intoxicating and there’s the old adage that “absolute power corrupts absolutely.” Who is power hungry? Let’s start with many scientists who have gotten drunk on being celebrated and venerated on television and online 24/7. Revenge of the nerds here? Then there are the politicians. No politician wants to be held responsible on election day for two million or even 100,000 deaths, so even though there wasn’t a shred of proof that locking down the country would kill the pandemic, they went that route anyway.

Then, once in place, it has morphed from “flattening the curve” of an anticipated spike in hospitalizations which might overwhelm the health system to becoming about stopping the virus altogether (for which there is no cure yet for this or the 1968 flu) and then penultimately, particularly among Democratic governors and mayors, implementation of their progressive agenda by executive fiat under the guise of emergency requirements. With people locked in their homes, this effectively squelches opposition. Finally, the Democratic obsession with defeating Trump and regaining control of The White House is so overwhelming that it’s worth any price – even by plunging the nation into a terrible depression, to create an environment where Trump can be turned out of office and stripped of his signature pre-Covid success of a roaring economy. That pleases the Chinese too because Trump had been pressuring them on trade issues.

Places with enough backbone to stick with Western norms have included Sweden, Hong Kong and South Korea. Millions haven’t died as restaurants, parks, schools and offices have remained open. Twelve states in the US didn’t lock down and they’ve been doing just fine. Interestingly, New York State just announced that in a survey of about 1,200 newly admitted patients at over 100 New York hospitals conducted during the first few days of May that fully 66 percent of new Covid patients had been staying at home, not working (only 17 percent) and not using mass transit. Meaning people have been indoors. So how is staying at home indefinitely helpful? Meanwhile Chinese cities are all open for business and millions aren’t dying.

From Forbes magazine: “In addition to [New Yorkers] mostly coming from their homes, surveyed patients were more likely to be over 51 years old, and either nonessential workers, retired or unemployed. 96 percent of the surveyed patients had co-morbidities, which means nearly all had another chronic medical condition prior to catching coronavirus.” We also know that about eight out of ten deaths associated with Covid-19 in the U.S. have occurred in adults ages 65 and older, according to the U.S. Centers for Disease Control and Prevention (CDC) so why are we locking down all the younger people and prohibiting folks to go to parks and beaches where the sunshine (Vitamin-D) and fresh air will do everyone some good if most hospitalizations come from older people who’ve been staying at home? Maybe it’s a form of China envy for the power grab reasons indicated above?

But taking a clear look at today’s China is helpful. Aside from being an incubator for pandemics, China is a country that just last year put one million of their own citizens in concentration camps just because they were Moslems. China is a country that has been brutally suppressing freedom advocates in Hong Kong. China is country that rattles its sabers, missiles, warships and jet fighters every week against democratic Taiwan, threatening to invade and conquer them militarily. China is the main backer of the nefarious regime in North Korea and helps support Venezuela and Cuba among other bad actors. China is a country that essentially relies on the slave labor of untold millions to produce goods at ridiculously low prices so that Western nations can’t compete and then turns Westerners into consumer vassals – making Western nations utterly dependent on them for essentials including medicines and medical supplies, vitamins, clothing, shoes, hardware, electronics, you name it.

To protect America against the evil depredations of despotic regimes such as China and to ensure peace, freedom and stability in the world we must wean ourselves off the teat of cheap (and often shoddily made) Chinese goods even if we have to pay more for them. Make things in America or in allied nations so that we retain our independence on all levels – and one sure way to put us on that path is to send our young people back to work and back to school now so that as a nation we are not bankrupted, enfeebled and ultimately dominated by malevolent dictators.

Dr. Fred Schwarz wrote the book “You Can Trust The Communists to be Communists” over 50 years ago but the title is just as applicable for today as it was back then.

It would be interesting to see how many Democrats/businesses and Republicans/businesses have cozied up to Red China over the past 30 years. And this includes former members of Congress who are lobbyists for companies doing business with the Reds.

“Embarrassing as hell”, Yoda would say.

Time to expose our own greedy internal corrupt politicians. At least most Republicans are anti-communist in theory, and some really in practice. Can’t say the same thing about 99% of the Democrats. Now we know who our internal enemies are - Democrats on a quest for power and wealth.

2 posted on 05/26/2020 12:11:37 AM PDT by MadMax, the Grinning Reaper
[ Post Reply | Private Reply | To 1 | View Replies]
To: MadMax, the Grinning Reaper
I believe the hysteria in the West derives from the really radical reaction of China to the outbreak in Wu Han. Intelligence already had suggested that it was an engineered virus that escaped from he lab there and the Chinese reacted as if they believed it to be as deadly as they had designed it to be. We took our cue from that Chinese reaction. they thought they had released a Bubonic Plague level pestilence on their own people. Then China made damned sure that the rest of the world would be infected, too, so that China would not be shoved way back in the global competition and cede to its enemies.

Indications also seem to suggest that the virus has been far more lethal in China than outside of China and possibly due to the virus being far more lethal to AB blood types than to O types. That suggests it was being developed to target racially specific sections of the population and they got it wrong. That rapid termination of 21 million cell phone accounts is suggestive. Chinese people are required to have and to carry smartphones which monitor and locate them 24/7 and are only terminated at the demise of the account holders.

3 posted on 05/26/2020 5:15:27 AM PDT by arthurus (so covfefe go)
[ Post Reply | Private Reply | To 2 | View Replies]
To: MadMax, the Grinning Reaper
The Democrat Party is, in all but name, a Communist Party. When/if they take the Presidency and the Senate in November we will all understand that very quickly. I now expect them to do just that as they own the major cities in each state and will adjust the vote count in those cities to offset any republican majorities in the rest of their states. They have been doing this in a few selected cities for decades and the last election was won by DJT because of Democrat incompetence in two counties in Florida. We can't count on incompetence in all fifty states this year and it will be ALL states. The Bolshevik party intends to take what was snatched from their claws in 2016.

And the Republicans will say,"Oh well, we lost. Better luck next time." But there will be no next time. A Democrat sweep in one election cycle will utterly change how elections are run and how votes are counted. Elections will never end but they will be scripted and edited and produced like movies.