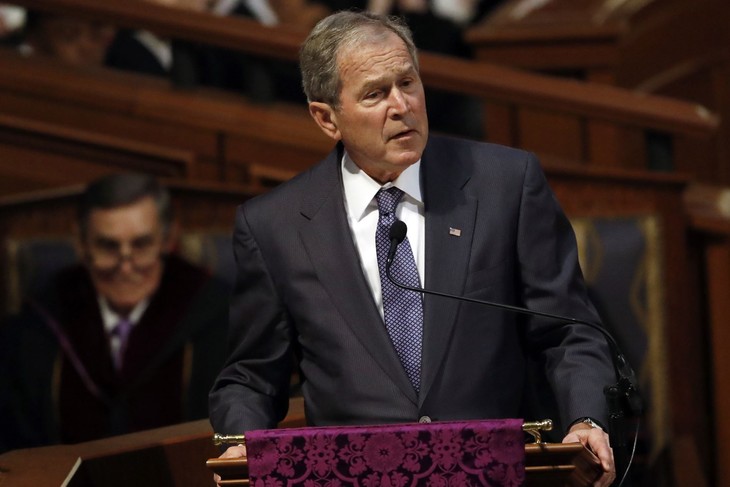 The New York Times reported on Saturday that a few high-profile Republicans would not be supporting Trump’s reelection. But, one of those Republicans, former President George W. Bush, is denying that report.

“This is completely made up,” Bush spokesman Freddy Ford said in an email to the Texas Tribune. “He's retired from presidential politics and has not indicated how he will vote.”

In an email to @texastribune’s @ragajus, George W. Bush spox @kyfredchicken denies @nytimes report: "This is completely made up. He is retired from presidential politics and has not indicated how he will vote.” https://t.co/tWelJOqmhv https://t.co/RiHpmkfa5Z

The New York Times has not updated the article with Ford’s statement.

There is a lot of tensions between the Bush family and Trump. In 2016, Bush’s younger brother Jeb also sought the Republican nomination for the presidency, and was repeatedly mocked by Trump. George W. Bush has also been criticized by the current president, particularly with regard to the Iraq War. In a July 2018 rally, Trump also attacked George H.W. Bush, saying, “Thousand points of light, I never quite got that one.”

The phrase, “a thousand points of light” was popularized during his 1988 presidential campaign, and was later used as the name of a nonprofit group founded by the late 41st president to promote volunteerism.

“What the hell is that?” Trump said. “Has anyone ever figured that one out? And it was put out by a Republican, wasn’t it? I know one thing, Make America Great Again we understand.

Then let George W. Bush come out and SAY IT!

Come out and pronounce his support for his party's candidate, like all good past Presidents should do.

Bush Sr: “I see a thousand points of light”

TRUMP: “What the hell is that?” Trump said. “Has anyone ever figured that one out? And it was put out by a Republican, wasn’t it? I know one thing, Make America Great Again we understand.

I AGREE with Trump! The phrase SICKENED ME at the time and then media swooned over it. That man was horrific.

An endorsement from Bush is a negative. Why do you think the GOP never has Bush at its national conventions? He left office as one of the most unpopular presidents in history

If the NY Times publishes something that is NOT completely made-up, now THAT would be newsworthy.

Tell us about Covid-19, W? You’re an expert on WMDs. Powell, too. Whatever happened to Hans Blix? Birx? It’s all so confusing, Jorge. Perhaps U could clarify W. U useless.

19 has done DAMAGE that cannot be calculated, nor can the perps be identified beyond the shadow of a doubt. There’s always plausible deniability. Right, W?

However, many gullible Freepers jumped on the report as justification for their Bush bashing

Bush and Romney should skip off down the yellow brick road together and find the scarecrow.

has not indicated how he will vote.

Yes he has. Not for or against. Which is a half a vote for Biden

In this case, the NY Times article is “fake, but accurate.” No establishment / Deep State Bushie will vote for PDJT. George P. Bush, Jebbie’s son, is an exception. He campaigned for PDJT in 2016 after Trump forced his father to drop out.

Everything about President Trump and the Republican Party in the New York Times is completely made up.

Bush and Romney should skip off down the yellow brick road together and find the scarecrow.

They haven't published a correction either...guess they know Bush is too much of a public figure to be able to sue the bastards...

The NY Times article was pure wishful thinking and calculated to depress Trump’s polling numbers. There is nothing accurate about it.
They never even bothered to check up with Bush or his representatives. They made the story out of thin air.

Mission accomplished it let them add Bush so they could push the narrative that ex military and some Republicans were against Trump. We don’t care about bush but that impacts suburban women and the squishy middle.

Bush is bashable for many valid reasons.

This coming from someone who had been taken in by GW Bush. I even stood fir hours in a cold January rain in DC just to see his first inauguration in person. Now, I can see his Deep State colors.