Joe Bidens Capitulation To The Crazy Left Is Alienating Democrats Like Me
The Federalist ^ | August 7, 2020 | Scott J. Street

Unlike Biden, Trump is delivering a clear and appealing message: Send kids back to school, support police officers, and get people back to work now.

Last year, Joe Biden’s path to the presidency seemed clear: Treat President Donald Trump as a historical anomaly whom Biden would replace, then restore American values, overcome petty politics, and get government working again. This message was designed to appeal both to Democrats, like me, and to Republican and Independent voters tired of the toxic political environment we’ve suffered since 2016.

That strategy initially worked well. Despite constant attacks from opponents and the press, by March 17, Biden had effectively wrapped up the nomination, and polls showed him trouncing Trump in key states such as Michigan and Pennsylvania.

In recent weeks, however, Biden’s messaging has changed. Now it is pushing millions of voters toward Trump just as regular Americans start paying closer attention to the race. Most Beltway Democrats don’t recognize this, of course. They see polls showing Biden with a large lead over Trump and believe the former vice president is headed for a blowout win.

They might be right, but the winds seem to be changing. Polls that failed to predict the outcome of the 2016 presidential contest seem just as likely to fail now, with 62 percent of Americans afraid to say what they believe because of our toxic political environment. The more Biden caves to the left, the harder it becomes for him to win middle-class voters, especially those in the upper Midwest who typically decide presidential elections.

Nowhere is this more apparent than in Biden’s new alliance with democratic socialist Sen. Bernie Sanders. Biden deserves credit for trying to bring Sanders’ supporters into the fold, something Hillary Clinton never really did. The 110-page “unity plan” Biden’s campaign developed with Sanders supporters such as Rep. Alexandra Ocasio-Cortez tries hard to make both the far-left and moderates happy.

Like most such efforts, however, it fails. It throws trillions of dollars at problems without explaining how to pay for them or taking into account the debt-fueled trillions Congress is spending to deal with the coronavirus. It envisions a bloated bureaucracy that would shift even more power away from states and local governments and into Washington, D.C.

That is not a popular idea in America, and it won’t appeal to middle-class voters who have watched their government bungle the pandemic response, unnecessarily driving the country into the worst economic crisis since the Great Depression, with no end in sight. While the Democratic Party worries about the details of the unity plan, the rest of America is focused on simpler things, such as getting kids back to school — real school, not the fake virtual learning kids had to participate in during the spring — and getting people back to work. On those issues, Biden’s plans miss the mark.

Take the former vice president’s proposal to reopen schools this fall. It consumes five pages, discussing things that have nothing to do with schools or children.

It contains bureaucratic gobbledygook such as creating a “White House-led initiative to identify evidence-based policy solutions that address gaps in learning, mental health, social and emotional well-being, and systemic racial and socioeconomic disparities in education that the pandemic has exacerbated” plus developing “a COVID-19 Educational Equity Gap Challenge Grant to encourage states and tribal governments … to develop bold plans that adopt evidence-based policy recommendations and give all of our students the support they need to succeed.”

American voters aren’t stupid. They see a five-point, five-page “roadmap” to reopening schools, and they know what it means: Schools won’t reopen any time soon. They won’t tolerate that.

Biden’s plan to reopen the American economy has similar failings. Biden would also “Build a National Contact Tracing Workforce,” which he says is “a core component of a robust nationwide data-driven disease surveillance system.”

Seriously? A nationwide surveillance system might sound good to people in D.C. — who, of course, would run this new bureaucracy — but it sounds downright Orwellian to the rest of us, for a virus that more than 99 percent of people survive. Voters across America have already seen their civil liberties trampled this year. They will not welcome further intrusions.

Although Biden takes a law-and-order approach to coronavirus, he has thrown actual law enforcement officers under the bus by kowtowing to activists who want to “defund the police.” As Biden knows, defunding the police is a myth. Its proponents openly admit they want to abolish police departments, not only defund them.

Meanwhile, in the real world, crime is skyrocketing. Eliminating the police will not help the residents of Chicago, Minneapolis, New York, and Portland. Neither will conditioning federal aid on whether police departments “meet certain basic standards of decency, honorableness and, in fact, are able to demonstrate they can protect the community, everybody in the community,” the position Biden took to avoid saying he wants the police defunded.

Imagine telling that to a gang unit or to undercover officers. Biden can keep trying to toe the line, but when regular Americans hear him say he will condition federal aid on cops being “decent,” they reasonably interpret that to mean he will bow to the mob and not stand up for law enforcement. This is why the National Association of Police Organizations endorsed Trump this year, despite endorsing the Obama-Biden ticket in 2008 and 2012 specifically because it included Biden.

“For Joe Biden, police are shaking their heads because he used to be a stand-up guy who backed law enforcement,” said the association’s executive director Bill Johnson. Sadly, this plays right into Trump’s hand. Trump might not know much, but he has stellar political instincts. Unlike Democrats, he’s delivering a clear message that will appeal to the majority of Americans: Send kids back to school, support police officers, and get people back to work now.

In this vein, Trump is following in the footsteps of Ronald Reagan, just as he did in 2016. Democrats underestimated Reagan’s appeal during the 1980s. It wasn’t until 2006 that one prominent Democrat observed that Reagan’s skill in winning middle-class voters “spoke to the failures of liberal government, during a period of economic stagnation, to give middle-class voters any sense that it was fighting for them.”

“By promising to side with those who worked hard, obeyed the law, cared for their families, and loved their country, Reagan offered Americans a sense of a common purpose that liberals seemed no longer able to muster,” this prominent Democrat observed. “And the more his critics carped, the more those critics played into the role he’d written for them — a band of out-of-touch, tax-and-spend, blame-America-first, politically correct elites.”

That Democrat was Barack Obama, writing in his 2006 book “The Audacity of Hope.” His observations apply just as much today as they did then — and they will drive people to vote for Trump again.

This is already occurring across key states. CNN’s Rich Thau has been conducting focus groups of Obama-Trump voters in the Midwest and found recently that 22 of 33 respondents preferred Trump to Biden. It’s easy to see why. According to Thau:

They think a businessman is best suited to turn the country around economically. They feel COVID-19 was not Trump’s fault, and he’s doing the best he can to contain it. They conflate the Black Lives Matter protesters with the rioters attacking federal buildings and retail shops. They don’t want historic monuments torn down. And they dismiss defunding the police as ridiculous.

These voters tell me they want America finally to be put first; they oppose immigration and trade policies they say give benefits to foreigners at their expense. And they want a non-politician who relentlessly fights back, after witnessing too many officeholders fold in the face of special interests.

These voters cannot be discounted as racists or deplorables who need to be canceled. Their votes matter just as much as the protesters and rioters. They could easily lift Trump to a second term.

If that happens, Democrats will have only themselves to blame. The coronavirus gave them the chance to show what real leadership looks like. So far, they have failed.

Democrats have a small window to come to their senses, reconnect with working people, and fix it. But that will require them to get out of Washington and stand up to the special interests that are exploiting the virus for political gain — and that seems increasingly unlikely.

Scott Street is a Democratic lawyer and consultant in Los Angeles. He regularly writes about legal and political issues.

The other Democrats agreed to supply the reindeer and red suit to Biden if they could load the sleigh.

No demhole breathing can ever do this...

As one Democrat in Virginia I know noted, I love Trump but the Democrats pay my rent.

Mr. Street, I say this with all due respect. As a sane and rational human being you need to be OUT of the Democrat Party. It no longer has a place for people like you. My grandfather was a rather influential Democrat and he figured this out and left forty years ago. Come on in, the water is fine!

Crazy Left is all they have.

This guy doesn’t realize that his old party has evaporated.

6 posted on 08/07/2020 7:13:49 AM PDT by ClearCase_guy (If White Privilege is real, why did Elizabeth Warren lie about being an Indian?)
[ Post Reply | Private Reply | To 1 | View Replies]
To: Brian Griffin
As one Democrat in Virginia I know noted, I love Trump but the Democrats pay my rent.

We have a union school teacher in the family who is right-thinking on all major issues, but invariably votes what his union tells him is best for his pocketbook. It's maddening. 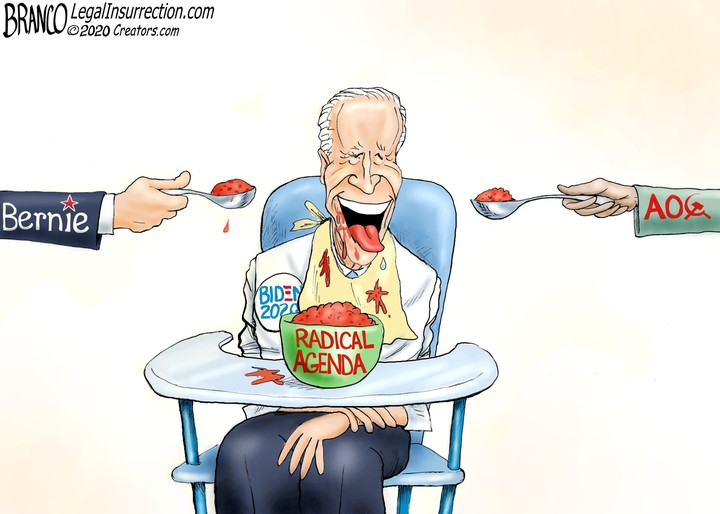 I disagree that Biden was ever cruising to an easy victory.

And their union reps follow them into the voting booth?

Honestly at this point anyone who would be willing to term themselves a “Democrat” in light of that party’s complete capitulation to Communism and anarchy doesn’t have anything to say that I’m interested in hearing.

He sure does, and the sooner the better.

If we had old fashioned in person voting with no early voting, no votes counted after election day, and solid and fair voter ID, I think Trump would win a minimum of 40 states and it would be a blowout similar to 1984. But with mail in voting, voting early (and often), vote harvesting, the Rats are going to steal this election up and down the ticket....

They don't have to. How do you think the Swamp keeps such tight control in D.C.? Sadly most people would apparently sell out their own mothers in exchange for their pension.

Will he vote for Trump?

Will he vote for Trump?

No, Biden will be replaced by then, Comrade Street will vote for whoever the CommieRAT party selects as a replacement.

The toxic political environment didn’t start in 2016. It was there in 2000-2008. It occurs whenever a Republican is in the White House.

The “crazy left” controls the whole Rat Party now, not JUST Uncle Joe. You vote for a Democrat, you are voting for the radical Commie Left because they force their party members to stay in line, unless it its to fake moderation for a while to get re-elected.

Scott misses the fundamental reality of the DNC today. There is no going back..... the far left fringe of the party dictates the platform to the other 90%. Too many democrats fail to realize that the media is part of the 10% so the truth is hidden from them.

There is no room in the DNC tent for “moderates”.