SPANAWAY, Wash. — A 78-year-old woman from Spanaway held an intruder at gunpoint after finding the man breaking into her home, according to the Pierce County Sheriff’s Office.

The woman, who goes by Sandy, knew something was wrong when her dog, Booboo, started barking Sunday night.

“I opened my door, and standing right 2, 3 feet in front of me was a man. We looked at each other for a few seconds, and he turned and started to leave. And I said, ‘Oh no, you don’t. You stay right there!’” she said.

Sandy said her neighborhood has been plagued by crime recently, resulting in her car being prowled twice. When she came face to face with the intruder, she wasn’t about to let him run away.

“I reached over and got my shotgun. And I cocked it, and I told him to stay right there,” she said. “Told him to go sit on the steps. I followed him out, and I just stood here with the shotgun waiting for the police to come.”

It was Sandy’s first time using the shotgun, which she got years ago to protect her family as a single mother. She was initially “scared to death” while holding the intruder at gunpoint.

“But then I was totally calm, really and truly. I thought, ‘This is amazing!’ I said, ‘You know, I’ve got grandchildren your age!’”

The grandmother asked why he tried to break in and was alarmed to hear some of his answers. The Pierce County Sheriff’s Office reported the man told deputies, “He was looking for his wife and talked about how God had sent him.”

Deputies arrested the suspect and said it’s all thanks to Sandy’s quick thinking and bold actions.

The grandmother said she’s grateful no one, including the intruder, got hurt.

“After he was so meek and mild and sat down like I told him to do? It was empowering. I felt like at least I was in charge. I wasn’t afraid,” she said.

Deputies said the suspect did not show any signs of impairment and did not seem distressed. He was released after the homeowner chose not to press charges.

Spanaway is a shithole (right next to Joint Base Lewis-McChord)

grandma needs to move out - the corrupt leftist media here in WA is protraying her as a nutcase.

Did the intruder’s underpants get damaged?

When will the DA charge her?

“He was looking for his wife and talked about how God had sent him.”

If this was the guy’s real reason, Grandma should have charged him so he could get the help he needs. Or at least keep others safe from his delusions.

Looking for his wife!?!

But then realized the perp was actually the one "scared to die". A shotgun pointed at a guy a few feet away has that effect.

That’s what the sheriff said.

I knew an old gal that ran a small store in the woods of Northern Minnesota. Lived there year-round by herself, no running water.

I suppose she was 85 or so and she was bragging about the time she chased off a couple of Indians that tried to rob her.

She was 90 something when they found her dead in her home that was in the back of the store. Beaten to death by three Indians. They caught them and iirc they all got life. I’d like to think that Evelyn got a few whacks in on them herself. She was feisty! 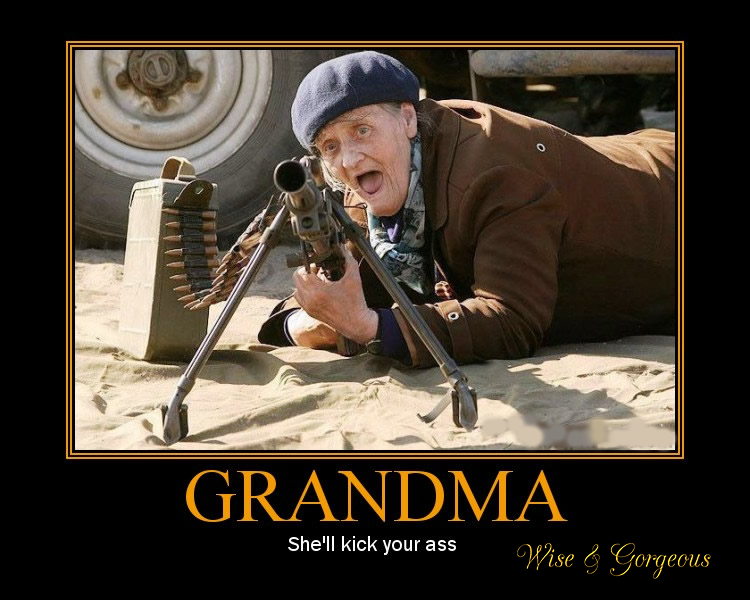 Hospitable my ass, get offa my porch!

I seriously doubt that!