De Mattei: Querida Amazonia: the consequences of the ‘turning point’ that never was 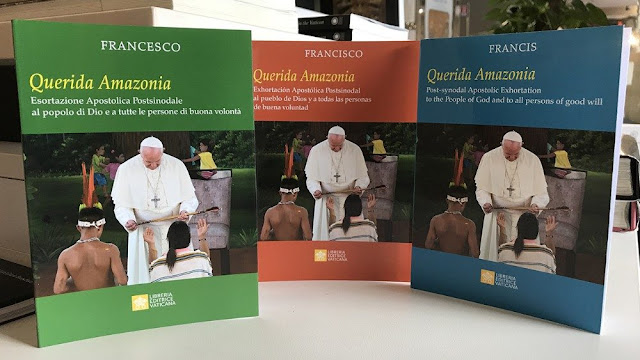 A temporary halt on “viri probati”;  the flop of the Amazon Synod; open conflict with the Amazonian-Germanic bishops.

These three points are contained in the dynamic initiated by Pope Francis’ Post-Synod Exhortation Querida Amazonua, presented on February 12th 2020.* There has been a great deal of suspenseful buildup around this Papal Exhortation, which put the final seal on the Amazon Synod, held in Rome from October 6th to 27th , 2019.** Both the Instrumentum Laboris (June 17th 2019) *** and the final document of October 26th proposed a new pantheistic cosmology expressed in the statue of the Pachamama, venerated in the Vatican Gardens and carried in procession into St. Peter’s, before being thrown into the Tiber by Alexander Tschugguel.

This cosmological vision is the most scandalous aspect of the Pan-Amazon Synod, which, though, proposed other ambitious objectives, such as the introduction of viri probati: namely the admittance of married men to the priesthood, after John Paul II and Benedict XVI had categorically excluded this hypothesis, but had been pushed by the most progressive sectors in the Church since the time of the Second Vatican Council.  Paragraph 111 of the Final Document approved by the Synod had taken on a strong symbolic value over the last few months. This paragraph proposed “ to ordain as priests suitable and respected men of the community with a legitimately constituted and stable family, who have had a fruitful permanent diaconate and receive an adequate formation for the priesthood.”

While Pope Francis was working on the definitive text for his Exhortation, on January 13th and 29th Cardinal Cláudio Hummes, rapporteur general  of the Amazon Synod and President of Repam, sent two letters sub secreto to all the bishops, to increase their awareness of the forthcoming release of Pope Francis’ text. In the second of these letters, the Brazilian Cardinal  attached a link to paragraph 111 of the Amazon Synod’s final document, implying that it would have been part of the Post-Synod Exhortation. The introduction of viri probati was supposed to begin in some regions of the Amazon and then later be extended to the universal Church.   Not only a mutable “ecclesiastical discipline would have been liquidated [by this], but the law of the Church founded on a Divine-Apostolic precept as well. However, in the Post-Synod Exhortation Querida Amazonia, not only is paragraph 111 absent, but also no paragraph whatsoever of the Synod’s Final Document is mentioned; the opposite of what happened with Amoris laetitia, which cited the Relatio finalis of the 2015 Synod about eighty times in its notes. It is true that in paragraph 3 of his Exhortation, Pope Francis suggests reading the Synod Document, in the hope that the Church may be “ ‘enriched’ by the work of the Assembly”, but the absence of any specific mention of passages or paragraphs of the Amazon Synod is the acknowledgement of its failure. The Pan-Amazon Synod is reduced to a fleeting dream, “a text – as Andrea Tornielli writes –written like a love-letter”.

Cardinal Hummes’ letter to the bishops, which the Pope was certainly not unaware of, confirms how Pope Francis himself had deferred his choice until the very last, at the impetus of two opposing pressures: on one part, the Germanic-Amazonian Bishops, on the other, orthodox Catholics, who hailed the co-authored book by Cardinal Sarah and Benedict XVI, From the Depth of Our Hearts, published in the month of January, as a “manifesto”. This second impetus prevailed and the absence of Cardinal Hummes at the press conference for the presentation, proves to be significant. The Cardinal is in San Paolo, Brazil, where the protest against the Post-Synod Exhortation is bound to occur.

Nonetheless, in his meeting with journalists on January 28th 2019, during the flight back from Panama, Pope Francis had made a distinction between two personal convictions in favour of celibacy and what – he said – might be necessary for the Church, from a pastoral point of view.

On that occasion the Pope had cited a book by the Emeritus Bishop of Aliwal (South Africa), Fritz Lobinger, (Teams of Elders. Moving Beyond Viri Probati) which suggested the introduction of two types of priests in the Church: the first celibate, full time; the second married, with a family. The Osservatore Romano of February 6th, 2019 re-launched the “proposal for the priests of tomorrow” devised by Bishop Lobinger, implying that the Amazon Synod would have endorsed it.

This did not happen and the displeasure in the progressive milieu is bound to explode. The Querida Amazonia, unlike Amoris laetitia, does not mark the disruptive  “turning point” announced by Monsignor Franz-Josef Overbeck, Bishop of Essen, whereby, after the Bishops’ Synod on the Amazon “nothing would be the same again”.  But what especially should not be forgotten is that Pope Francis’ Exhortation is virtually coincident to the start of the German Bishops’ synodal path. At their gathering in Frankfurt,  they insisted on the call for the two forms of the priesthood -  for the celibate and the married. The Querida Amazonia, appears, in this context, like a slap-in-the -face to the German Episcopal Conference.

Some will remember at this point Pope Francis’ strategy of “two steps forward and one backwards”  but when a train travels at high speed, an abrupt braking can cause it to derail, putting an end to the journey in a dramatic way. The revolutionary process is a social machine that often becomes uncontrollable and sweeps its drivers away. “The Revolution devours its children” This famous sentence which the Girondist, Pierre Victurnien Vergniaud (1753-1793) uttered before the Jacobin Court  condemning him to death, is the key to understanding the heterogenesis ends of every action which strays from truth and order.

Also the demonstration of the Acies ordinata Catholics in Munich of Bavaria, reveals its great importance after the Post-Synod Exhortation of February 12th. Coinciding with the Querida Amazonia, Cardinal Reinhold Marx, announced that he will depart his office as President of the German Episcopal Conference. Observers connect this act to the strong pressures against the synodal process the Archbishop of Munich received over the last few months.  Among the opposition cited is that by the Cardinal Archbishop of Cologne, Rainer Maria Woelki, the “fraternal correction” endured from  the Ukrainian Bishops of the Latin Rite and the accusations of Acies ordinata, at their press conference on January 18th, in his very own diocese.

In opposition to the German Bishops’ synodal path which would lead them towards a new church, separated from the Catholic Apostolic and Roman Church, Acies ordinate made a public profession of faith in Munich with the recitation of the Credo. Today, Acies ordinata is the symbol of all those who are fighting in an orderly manner the forces of chaos in the Church, by standing with the rosary in hand, their eyes fixed on the enemy, as St. Ambrose exhorts: “The soldier stands in battle alert, not seated; the armed soldier does not sit reclined, but stands very erect. For this it is said to the soldiers of Christ: ‘Behold now, bless the Lord, all ye servants of the Lord, who stand in the house of the Lord’” (Comment on 12 Psalms, Città Nuova, Rome 1980, Psalm I, n. 27, p. 69).

TOPICS: Apologetics; Catholic; Worship
KEYWORDS: chaos; confusion; deception; francischism
Some will remember at this point Pope Francis’ strategy of “two steps forward and one backwards” but when a train travels at high speed, an abrupt braking can cause it to derail, putting an end to the journey in a dramatic way.
1 posted on 02/13/2020 8:17:02 PM PST by ebb tide
[ Post Reply | Private Reply | View Replies]
To: Al Hitan; Coleus; DuncanWaring; Fedora; irishjuggler; Jaded; JoeFromSidney; kalee; markomalley; ...

I find it hard to believe anymore like I did that Francis and his BFF Marx are playing Good Cop -- Bad Cop now that Marx has resigned, unless he's being moved to the Curia and this makes it look like a dramatic protest. I thought Marx would never do anything in his synod that Francis didn't approve of.

The whole thing is just weird.

3 posted on 02/13/2020 8:57:38 PM PST by BlessedBeGod (To restore all things in Christ~~Appeasing evil is cowardice~~Francis is temporary. Hell is forever.)
[ Post Reply | Private Reply | To 1 | View Replies]
To: BlessedBeGod
Here's a link to the January 18 press conference of the Acies Ordinata prayer/protest held in Marx's diocese of Munich, for anybody who wants to refresh their memory or read or view a video about that.

I try to keep up, but things move fast.

I think we just got a glimpse of the gleaming feathers of the Holy Spirit. Y'know? Can't rule that out.

Let's continue praying for the Mercy of God upon +Francis and +Marx, and all those with them in partibus infidelium. Which means, in their circumstances,that they receive the enlightenment of mind to realize the deadly error of their ways, and the strength of will, at last, to repent, take up their cross, and join themselves to Christ's all-sufficient, atoning work.