Sen. Kerry Ought To Tell Voters How He Would Foil Al-Qaida
Tampa Tribune ^ | March 20, 2004 | staff editorial

All the world knows how President Bush deals with organized terror directed at America. He believes in military action to destroy its bases and neutralize its leaders, wherever they are. Where the presumed Democratic challenger stands is less clear. Sen. John Kerry of Massachusetts has said that Bush's foreign policy of triumphalism ``fuels the fire of jihadists,'' but now he doesn't seem so sure.

After terrorists blew up trains in Madrid, former Vermont Gov. Howard Dean tried to help the Kerry campaign by repeating the theme of blaming Bush, saying, ``The president was the one who dragged our troops to Iraq, which apparently has been a factor in the death of 200 Spaniards over the weekend.''

Kerry immediately backed away from that, saying, ``It's not our position.``

So what is his position? Kerry says, ```When it comes to protecting America from terrorism, this administration is big on bluster and is short on action. But as we saw again last week in Spain, real action is what we need.''

Kerry used to say that Bush ``exaggerated'' the terror threat. Now he promises to do a better job protecting the homeland and demands real action. What kind of action?

He would use military force, he says, but only when ``appropriate.''

Kerry also calls for wiser diplomacy. He has said unnamed leaders support him and not Bush. Now he says he doesn't want foreign endorsements. Among those openly supporting Kerry is Spain's new socialist leader, Jose Luis Rodriguez Zapatero, elected a few days after terrorists blew up commuter trains in Madrid.

Vice President Dick Cheney asks Kerry to explain the source of his foreign support: ``It is our business when a candidate for president claims the political endorsement of foreign leaders. At the very least, we have a right to know what he is saying to foreign leaders that makes them so supportive of his candidacy.''

Cheney notes that Kerry has dismissed our allies helping occupy Iraq as ``a coalition of the coerced and the bribed.''

Asks Cheney, ``How would Sen. Kerry describe Great Britain - coerced, or bribed? ... He speaks as if only those who openly oppose America's objectives have a chance of earning his respect.''

We don't blame Kerry for backing away from Dean's thoughtless rhetoric about Spain. But at least Dean said something consistent with Kerry's past position. Kerry owes it to the country to say clearly where he stands.

TOPICS: Editorial; Foreign Affairs; Government; News/Current Events; Politics/Elections; War on Terror
KEYWORDS: 2004; issues; johnkerry; nationalsecurity Navigation: use the links below to view more comments.
first 1-20, 21-27 next last
Kerry owes it to the country to say clearly where he stands.

Democratic presidential candidate Sen. John Kerry, D-Mass., points up to where he was after completing a three-hour trek up and down a mountain in Sawtooth National Recreation Area in Ketchum, Idaho Friday, March 19, 2004. Kerry snowshoed up and snowboarded down from about a 2000-foot ridge. (AP Photo/Elise Amendola

KERRY CALLED SECRET SERVICE AGENT 'SON OF A B*TCH' AFTER SLOPE SPILL [Full Text] Dem presidential candidate John Kerry called his secret service agent a "son of a bitch" after the agent inadvertently moved into his path during a ski mishap in Idaho, sending Kerry falling into the snow.

When asked a moment later about the incident by a reporter on the ski run, Kerry said sharply, "I don't fall down," the "son of a b*itch knocked me over."

"Obviously, the complications and burden of being monitored 24-hours a day is not just an a simple inconvenience," a government source explained Friday. "But Senator Kerry should understand agents are working for his safety and well-being."

On Friday, Kerry, his snowboard strapped to his back, hiked past 9,000 feet on Durrance Peak, then snowboarded down the mountain, taking repeated tumbles. Reporters counted six falls, although Kerry was out of sight for part of the descent.

"When I voted for the war, I voted for what I thought was best for the country," Kerry responded. "Did I expect Howard Dean to go off to the left and say, `I'm against everything?' Sure. Did I expect George Bush to f--- it up as badly as he did? I don't think anybody did."*** 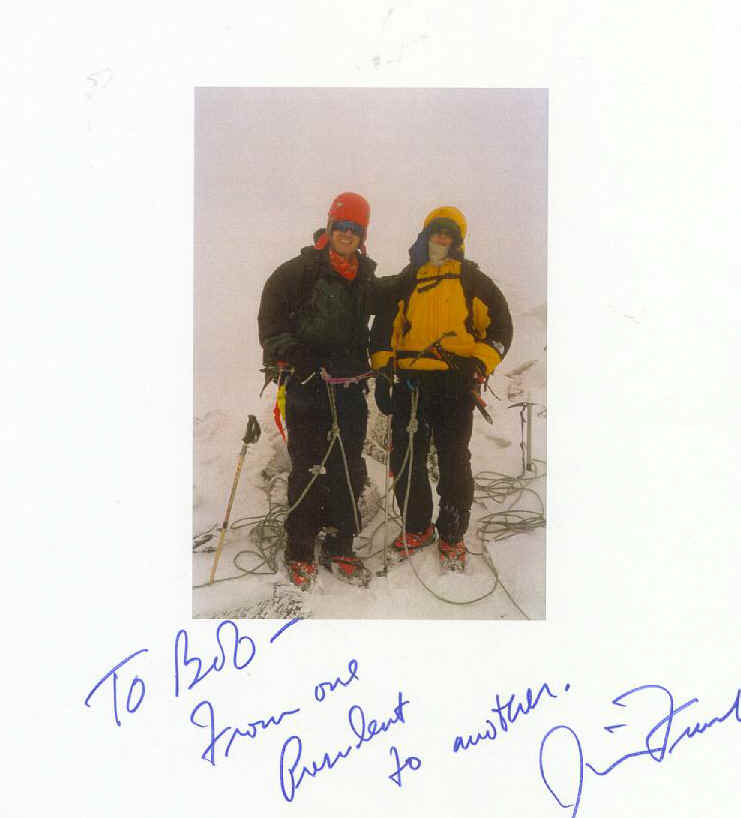 Al Gore and his young son on the summit of Mt. Rainier

Word about Gore from on high -- he and son are on Mount Rainier***Vice President Al Gore and his son are vacationing on Mount Rainier as part of a private, unpublicized family visit, an official at the White House said yesterday.

Asked about the visit, a senior member of Gore's staff said last night, "The vice president is on vacation in the West with his son," Albert Gore III. "Beyond that, I cannot comment."

Gore, an avid jogger and hiker, told the Post-Intelligencer last September that he was eager to climb the 14,411-foot-high volcano at some point in 1999, if he could spare the time.

The White House official who acknowledged that Gore was on Rainier would not comment for attribution. He said the trip has been kept so secret that even many senior staff and presidential campaign aides were not informed of it. A Democratic Party adviser confirmed that account of the visit.***

Insightful article: Kerry's World: Father Knows Best***There are differences, to be sure, between Richard and John Kerry. Over the course of his political career, John Kerry has occasionally endorsed the use of force, as in the cases of Panama and Kosovo, and he has always found a rhetorical place for morality in his foreign policy pronouncements. But, more often than not, even as John Kerry stumps for president, the similarities shine through. Last month, for example, Kerry charged that the administration's "high-handed treatment of our European allies, on everything from Iraq to the Kyoto climate-change treaty, has strained relations nearly to the breaking point." It should be no surprise to hear John Kerry worry about European allies and to strike such liberal internationalist notes. These ideas aren't just deeply felt; they're in his blood.***

Then he could do a Leonard Zelig and transform himself into one of them. While they're unconscious he could spritz them with Spray Formula A-673-5-K to the second power, a Martian home remedy found on page 64--it makes it made anyone who smells it fall instantly in love with "Uncle Martin". Then like St. Urho he could lead the insects to the coast where they can marry one another and live happily after ever.

The Times is a much better paper, and continually receives awards etc., but we can't stand their editorial stands so we opt for the Trib.

I've spoken with a marketing guy for the Tribune and he says that I'm not the only one. Sometimes when the Times takes a ridiculously liberal stand, they'll get loads of people calling for a Trib subscription because they just cancelled their Times subscription.

Sometimes I succumb to a low cost temporary subscription to the Times, just so I can have the pleasure of calling them up and cancelling my subscription when I read one of their ultra liberal editorials.

However, last week the Times editorial staff took the Democrats to task of CFR. Actually said they were corrupting the system and taking advantage of loopholes. Well, even a broken clock is right twice a day.
10 posted on 03/20/2004 3:40:13 AM PST by dawn53
[ Post Reply | Private Reply | To 4 | View Replies]
To: monocle
But Kerry believes terrorism is a law enforcement problem.

So does Ex-Commander-Im-Peached, Bill Clinton.

Back up, drop “trou”, and beg for mercy like the "girly-man" that he is!

Meanwhile, steady hands are commanding the troops that are taking "HELL" to these terrorist hellions!!!

God bless America, the TROOPS, and President Bush (and all that serve with him)!

It's none of your business!!

13 posted on 03/20/2004 4:08:31 AM PST by Fresh Wind (George Bush kills terrorists. Bill Clinton pardons them. John Al-Qerry will apologize to them.)
[ Post Reply | Private Reply | To 1 | View Replies]
To: Cincinatus' Wife
So far, the most indepth details Kerry has given on any topic is: "I have a plan [period, end of discussion, don't question me on that topic any more or you'll be considered making negative attacks on my]."

Some day, Kerry is going to have to start giving substance. Otherwise, Kerry is spewing nothing but empty-suit rhetoric. The empty Bushbashing is getting to be old hat as his answer to nearly every question.

14 posted on 03/20/2004 4:16:01 AM PST by TomGuy ('Jacques strap' Kerry is scarey.)
[ Post Reply | Private Reply | To 1 | View Replies]
To: Cincinatus' Wife
Last month, Kerry began receiving Secret Service protection. "Obviously, the complications and burden of being monitored 24-hours a day is not just an a simple inconvenience,"

Especially when you're trying to get some tail without Teresa finding about it. By November, Kerry is gonna have the worst case of blue balls ever known to mankind.

Either the Dems have concluded that this election is Bush's, so Kerry is the 'Dole--aka throwaway candidate'. Or HClinton wants Kerry to do battle until the convention or even later, where she can emerge as the savior--and have a much, much shorter campaign period, because she knows she can't stand up to the scrutiny of a lengthy campaign period.

The Clintons already have informed Kerry that they are still in control of the Democrat Party. Kerry said he'd dump Terry McAuliffe if he gets the needed delegates, thus presumptive control of the Party. Well, he got the delegates, but the Clintons nixed any dumping of Terry. Score 1 for the Clintons, 0 for Kerry on party control.
19 posted on 03/20/2004 5:05:54 AM PST by TomGuy ('Jacques strap' Kerry is scarey.)
[ Post Reply | Private Reply | To 16 | View Replies]
To: Cincinatus' Wife
KERRY ON KERRY: RECKLESS AND IRRESPONSIBLE


The FNC aired a clip of Kerry being interviewed on CBS's Face The Nation between the time he voted "for" the 87 billion dollar funding for U.S. troops and his ultimate vote against that same bill.

The FNC panel then had some choice words afterwards.

Audio was grabbed from Hugh Hewitt's brilliant yack show on the dial......

You gotta hear this audio---then remember that HE voted AGAINST the $87 Billion for Iraq.