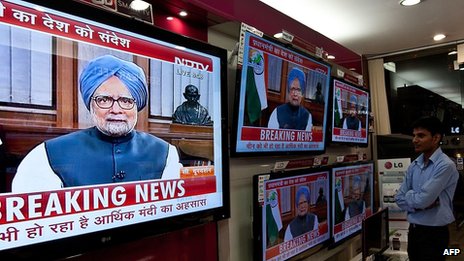 Prime Minister Manmohan Singh has defended his economic reforms, saying they are necessary to fight an economic slowdown in India.

They have been fiercely opposed by trade unions and prompted coalition ally, the Trinamool Congress party, to resign from government.

"We have to restore the confidence of foreign investors... Money does not grow on trees and that is why we have made these decisions," Mr Singh said in a rare national televised address.

Under the government's proposal, global firms such as Walmart and Tesco will be able to buy up to a 51% stake in multi-brand retailers in India.

Multinational retailers already have outlets in India, but at present they can sell only to smaller retailers. This decision allows them to sell directly to Indian consumers.

The reforms, which were rolled out last week, also include cutting diesel subsidies and limiting subsidies on cooking gas.

Somebody in India gets it.

They’re boom over the past decade was due to the fact that they turned from socialism toward capitalism. But in the last year or two they starting regressing. Good to see that they learned some lessons.

Well, he and his ministers are most corrupt. More investment means, more money in their own bank account.