US Warship Sails Within 'Striking Distance' Of North Korea As Donald Trump Prepares 'Show Of Force'
The Sun ^ | April 29, 2017 | By Patrick Knox

A HUGE US Navy super-carrier is gearing up for war off the coast of North Korea after Kim Jong-un's third test fire flop this month.

USS Carl Vinson aircraft carrier group arrived in waters near the Korean peninsula, where it will join the USS Michigan, a guided missile submarine that docked in South Korea on Tuesday.

As opposed to a minuscule US Navy aircraft carrier?

I have this vision that each failed missle launch results in the execution of several engineers and scientists. 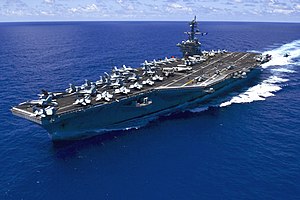 5 posted on 04/29/2017 4:08:39 AM PDT by heterosupremacist (Domine Iesu Christe, Filius Dei, miserere me peccatorem!)
[ Post Reply | Private Reply | To 1 | View Replies]
To: Ciaphas Cain
A HUGE US Navy super-carrier... As opposed to a minuscule US Navy aircraft carrier?

Obvious reference to Rubio's remarks about Trump's "small hands" and meant to know Trump is saying, "mine is bigger than yours"....

8 posted on 04/29/2017 4:12:00 AM PDT by weston (SO HERE'S THE STORY: As far as I'm concerned, it's Christ or nothing!)
[ Post Reply | Private Reply | To 1 | View Replies]
To: Raycpa
I have this vision that each failed missile launch results in the execution of several engineers and scientists.

You're probably right but he runs the risk of running out of them.

Trump should come up with a “Failure To Launch” nickname insult for boy Kim and humiliate them on the world stage. One of those classic Trump nicknames that sticks.

What the media is leaving out of the details of this Friday Night Failure was this was a liquid fuel short range SCUD. This is a variant of the infamous missile that Iraq used in the Gulf War 1991. They launched them at Isreal and we shot several of them down with the Patriot missile system.

In fact this missile is similar to the 1944 German V2 launched at London with a range of 200 miles.

I guess the missile program in Korea could be renamed NAS - Need Another Scientist...

In recognition of his efforts on behalf of the U.S. Navy, a nuclear-powered aircraft carrier was named the USS Carl Vinson, an honor rarely given to a person while living. On March 15, 1980, at age 96, he attended the ship’s launching.

While Little FATTY is watching the Vison’s every move, China will invade from the North-West.

Soon we will be past the no negotiation limit for the crazy little sociopath.

Like every megalomanic dictator in history, he will become more crazed as the noose tightens. Soon North Korea and South Korea will be one.

We should have included a hospital ship (for injured Norks).

On 4chan, folks near Alice Springs, AU, and also near bases in US say it appears something is going down.

I was on the Indy and it would take maybe
4 days for us to get there. This is a joke!

You would be correct

How do you mean?

And bring out a mothballed battleship for that special pucker factor. I remember operating alongside the U.S.S. New Jersey in the summer of 1969 and the thrill of seeing (and definitely hearing) those 16 inch rounds heading towards land.