Still struggling to come to terms with the results of the 2016 election, former first lady Michelle Obama recently said she’s concerned for women and “how we think.”

“In light of this last election, I’m concerned about us as women and how we think,” she said at the United State of Women Summit in Los Angeles. “What is going on in our heads where we let that happen, you know?”

Obama referred to Clinton as “the most qualified” candidate running for president in 2016, and said voting against her “says something about where we are.” That’s despite the multiple investigations, and of course Clinton’s uncanny inability to connect with the American public.

“When the most qualified person running was a woman, and look what we did instead, I mean that says something about where we are,” Obama added. The comments reflected similar ones made in September 2017, where the former first lady infamously said “any woman who voted against Hillary Clinton voted against their own voice.”

“Choice,” according to Obama and her fellow feminists, has evolved to mean supporting Hillary Clinton — or whoever the Democratic candidate is of the day — based on your body parts. (Pay no mind to Sarah Palin or Carly Fiorina, however.)

Although it sounds nice coming from celebrities and former first ladies (and comes with swag galore), doing what you’re told is hardly empowering — in fact, it’s oppressive.

However loud, the message hasn’t worked. In the 2016 election, 52 percent of white women, 4 percent of black women, and 25 percent of Latina women voted for Donald Trump.

Today, despite multiple investigations, 52 percent approve of how he’s handling the economy.

Sure, Trump is an imperfect human who has given women a reason to oppose him. But whether or not his allegations are justifiable based on a greater policy goal isn’t up to Obama to decide. It’s up to the individual — something the feminist movement has forgotten.

As for her question — “What is going on in our heads?” — I can’t speak for everyone, but jobs, tax reform, a strong national defense, and an educational system that works for all were a few items on the docket in 2016. And from the sound of it, these issues required far more more thinking “in our heads” than the decision to vote based on your body parts.

But as always, we appreciate the concern.

I’m concerned for “women” who were once men.

Coffee talk from a Wookiie...

Yes, conservative women are extremely concerned about how Michelle thinks.

Michael needs to just fade away.

These clowns are drunk on ‘statism’ 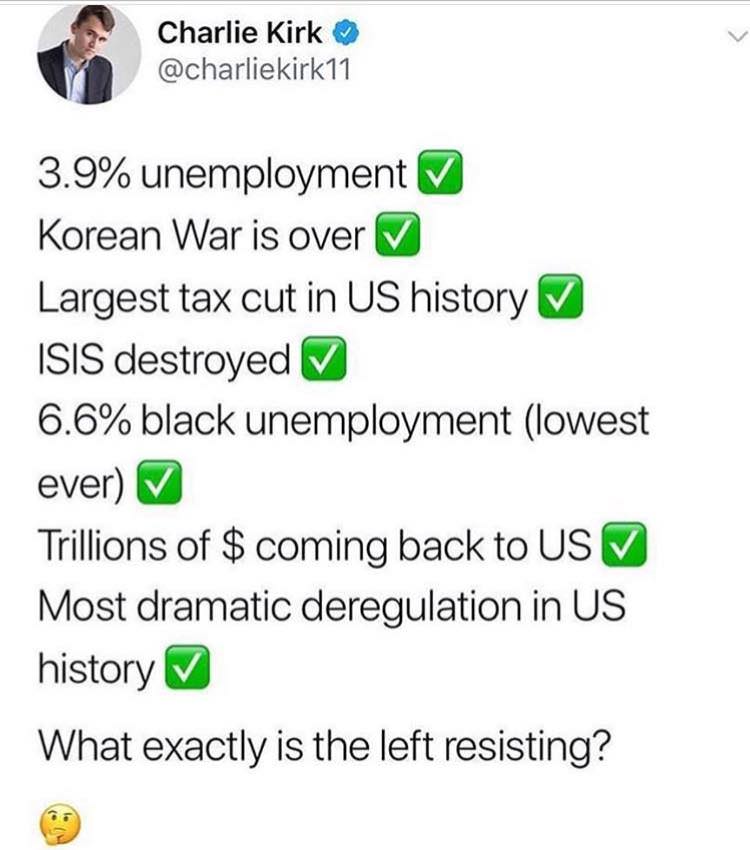 her muslim boyfriend Barry must be hitting the steam showers again after the golf outings in Palm Springs..

To state an obvious point, there are many strong independent conservative leaning women in my life — daughter, significant other, relatives, friends of the family, etc.

NONE of them vote based on how a man in their lives tells them they should vote.

ALL of them make up their own minds. ALL of them are not shy about taking issue with men in their lives.

AND NONE of them voted for Hillary.

They made up their own minds about who to vote for in that election.

This idea that women who voted for Trump are somehow, just not thinking straight, are subservient to a man, all of this, is such liberal nonsense. Yet that notion has gained traction.

Or I should say, has gained traction among the liberals.

Again, while women in my circle of family and friends lean conservative, none of them are doormats or shrinking violets, who will do whatever the man in their life tells them to do.

I think the liberals are just so stunned at Hillary’s loss, and also stunned because they just expected masses of women to vote for Hillary because they wanted a woman president, that they would vote en mass for Hillary.

Liberals have a hard time getting their arms around what happened in that election.

Hillary was not qualified for jack. This meme that she was the best qualified candidate ever is the biggest lie since Goebbels.

Wookie should be more concerned about her/his own problem of that ‘thing’ he/she stood next to during the ‘fake’ 8 years...

These ‘anti-trump’ idiots can keep their hatred up but it is just making Our President stronger with more voters behind him, so go ahead and keep flapping your jaws, you are helping us!!!

Yes, being “concerned” is right up there with “needing to have a conversation”, i.e., I will force you to think the right way eventually, although it may require a labor camp...
Mooschelle is an arrogant witch.

I am concerned about a student who wrote her college thesis on “WHY I HATE AMERICA” getting into the White House at all.

I’d call her a concern troll, but nah, she’s just a troll.

Yep....Michael AND 0Barka are certainly TROLLS!!!

Obama referred to Clinton as “the most qualified” candidate running for president in 2016, and said voting against her “says something about where we are.”

Really? Well lets see, McCain was the most qualified Candidate in 2008, did that make you think about who you were when they were voting for your Husband?