There’s a bit of news in the case of Jeffrey Epstein. He’s the convicted sex offender who somehow managed to commit suicide in a New York jail last month while he was supposed to be under close watch.

My public information request about his death— has been formally denied.

Shortly after Epstein died in August, I filed a Freedom of Information request for public documents about his injuries and medical care for both the day he died and earlier, in July, when he reportedly attempted suicide.

Member of the public and press are entitled to review documents and communications generated and collected by federal agencies and officials because– we own them. However, federal agencies often delay, obstruct and resist the release of such documents.

Guidance from FOI court cases and the executive branch indicates that federal agencies are supposed to make every effort to release as much information as possible– and at least partial information if exemptions are at play.

In the case of the Epstein documents I requested, the federal Bureau of Prisons responded by stating that it is withholding all of the documents entirely.

The Bureau cites six exemptions, including that releasing the information “could reasonably be expected to endanger the life or physical safety of an(y) individual.”

The FBI is said to be investigating how jail authorities missed Epstein committing the act of suicide in their custody while awaiting trial on new sex trafficking charges.

I see a 25% chance that Epstein is alive.

How easy would it be to switch a corpse in the bowels of Manhattan?

The Deep State is centered throughout the northeast.

The national capitol should be moved to rural Kansas.

Does anyone really not know this was Arkancide?! Sheesh.

They're traitors, enemies of the state and just plain convictable.

Unless Trump himself can be implicated, I see no downside.

Sorry. That should have been Arkanacide.

His grave is unmarked. Of course.

Grave close to his parents but those have been unmarked as well. Of course.

The timeline nails what happened. 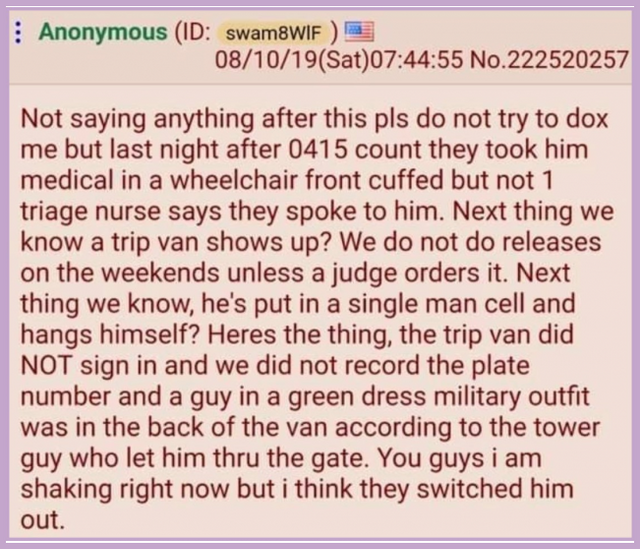 The timeline has been emerging into the main news but is slow to penetrate the blockade. One notable outlet reported the people who knew that Epstein was moved out hours before the press reported his 'suicide' have been talking.

He's not dead, but if you say this, then for now you're labeled a wild-eyed conspiracy nut.

You’d sure indict and convict more DS felons if they were committing their crimes in Kansas.

What does Aug 9 case mandated for release mean?

“The Man Who Knew Too Much”

And, I don’t think the Fake News purveyors would assimilate too well in, say, Junction City, Kansas.

Medical exam but without judge’s order or normal documenting of people and vehicles making transfer.

Our side is unfortunately being led by incompetents. POTUS needs a Ulysses Grant or Patton but instead he has a bunch of lifer pukes that only excel at covering their butts.

That’s hysterical but this is the real world and everybody land your space ships :)

epstein is NOTHING to the powers that be and DEAD is the only way he can never stand trial.

He was already arrested and awaiting trial. He was a permanent threat from there on in.

This isn’t the X Files