As Democrats Thrash, Trump Rises Above It All: Democrats handing president keys to a second term
Journal of American Greatness ^ | September 19, 2019 | Conrad Black

Just when it seems that the quality of the Democratic candidates and the ethical standards of the Democratic media might start to rebound to normal civilized levels (not a high bar since the days of JFK, LBJ, and Hubert Humphrey), they excavate new depths of inanity and unprofessionalism.

I believe that the latest outburst against Supreme Court Justice Kavanaugh will be seen as a significant milestone in the slide to perdition of the Democratic presidential nominating process and of that party’s lock-step media accomplices.

The New York Times produced an allegation that Kavanaugh had sexually assaulted a woman 30 years ago, and Senators Kamala Harris (D-Calif.) and Elizabeth Warren (D-Mass.), and, even more predictably, the almost-brain-dead former congressman Beto O’Rourke (D-Texas), called for Kavanaugh’s immediate impeachment and removal.

There was not the slightest question of waiting for the justice’s response or for any independent corroboration. The mere fact that the Times published a story alleging Kavanaugh had drunkenly assaulted someone 30 years ago, without any substantive details beyond hearsay, was enough to prompt three prominent Democrats to demand that Kavanaugh be ousted from the high court. Three candidates, bear in mind, who among them appear to have the combined support of 30 percent of their party’s base.

The story immediately collapsed; the Times acknowledged that the alleged victim didn’t want the matter raised, and her friends reported that she did not recall any such incident. The editors of the Times took no precautions to assure that there actually was a real source for the story. Yet that was still enough to prompt Senator Warren, now charging toward the lead among Democratic presidential aspirants, and Senator Harris, the former attorney general of California, and O’Rourke, who got 48.3 percent of the vote running against Ted Cruz for the U.S. Senate in Texas last year, to demand the removal in disgrace of a U.S. Supreme Court justice. It is inconceivable that any serious person could wish the presidency of the United States in the hands of such people. Dissension Within the Ranks

The failure of the New York Times is so complete and so inexcusable—no effort whatever to verify this grievous allegation and concealment of the doubtfulness of it—that it has started to fray the Democratic media’s solid wall.

MSNBC’s Joe Scarborough, a former Republican congressman and foaming-at-the-mouth Trumpophobe, lambasted the Times. This was an unheard-of breaking of ranks, though presumably a tactical effort to amputate the gangrene of the Times’ naked partisanship in order to try to salvage some credibility for the beleaguered anti-Trump media.

Scarborough’s dash for the tall grass didn’t start a rampage. Lawrence O’Donnell, the former producer of the television series “West Wing,” whose last foray for the anti-Trump cause was the ill-fated floater that the president had obtained loans from German banks on the guaranties of Russian oligarchs, facilitated the escape of the New York Times reporters. Under his questioning, Robin Pogrebin and Kate Kelly laid the blame on their editors, who, unknown to them, eliminated the sentence noting the fact that Kavanaugh’s alleged victim did not recall the incident alleged.

This is fairly implausible, as the woman’s inability to recollect the incident makes a formidable prima facie case that there was no incident, which even at the Times might seriously dilute the newsworthiness of the story. This is from the same newspaper that told us the investigation of Trump’s ties to Russia began with the sinister meeting of former Australian opposition leader and high commissioner in London, Alexander Downer, and low-level Trump campaign adviser George Papadopoulos at London’s Kensington Wine Bar over a couple of drinks.

The Democratic candidates are hopeless, except possibly for Amy Klobuchar (D.-Minn.), who seems to retain some solid Minnesota credentials as a sane liberal of the Hubert Humphrey-Walter Mondale school—no world-beater but not someone to use to scare young children into eating their breakfast cereal either.

Joe Biden is being carried all the way down the field toward the finish line; the country waits for and celebrates his verbal blunders in what has become a great national sport. Bernie Sanders is a cranky, acoustically annoying Marxist crackpot whose thinking hasn’t even advanced to the Twentieth Communist Party Congress (1956).

It isn’t just false stories in the New York Times that send Democratic legislators to the media barricades demanding impeachment. Jerry Nadler’s dismal circus in the House Judiciary Committee racked up another fiasco on Tuesday with the appearance of former Trump campaign manager Corey Lewandowski. The majority counsel, Barry Berke, sent the bored stay-at-homes of America back to their soap operas with his irritating badgering about whether Lewandowski had always told the whole truth to the press; concluded that he hadn’t and that therefore he was ashamed of matters that had occurred at the Trump campaign and that therefore he was trying to cover up criminal behavior.

Representative Eric Swalwell (D-Calif.), the first to drop out of the Democratic presidential race—i.e., the person with the least support of all these dozens of deadbeats and socialist kooks—claimed some triumph for himself in Lewandowski’s refusal to read for the committee and television cameras an extract from Special Counsel Robert Mueller’s report.

Trump cooperated entirely with Mueller, while denouncing his inquiry, and stonewalling congressional attempts to pretend the Democrats have a right to a permanent investigation of this president. Someone who has cooperated completely with real (and rabidly hostile) investigators cannot be accused of obstructing justice by partisan Democratic mudslingers in Congress.

As had been widely foreseen, it has all become boring and ludicrous and is about to be overwhelmed by the indictments of the fabricators of the whole Trump impeachment fraud.

The Democratic legislative sickness isn’t confined to ineffectual haymakers aimed at the administration. Senate Minority Leader Chuck Schumer (D-N.Y.) announced a couple of weeks ago he would table legislation restricting the sale of body armor. In 60 years of closely following politics in Washington, that is possibly the stupidest idea for a bill I have seen.

Schumer was motivated in his innovative theory by the notion that if the sales of bullet-resistant body armor were restricted, mass killers would not be able to obtain them and would be deterred from such evil acts. This notion is unutterably asinine, sank like a stone, and is only cited as evidence of the terrible deterioration of the bipartisan political apparatus that Trump set out to remove and replace in 2015. Trump’s Astonishing Change

Finally, the president’s mood is more relaxed. When asked last week if there were any Democratic candidates he thought well of, he replied “I respect them all . . . it’s hard work campaigning for president and I respect them all.”

Trump referred to House Speaker Nancy Pelosi (D-Calif.) as a strong and capable person. His timing is perfect; the Democrats thrash away like drowning spiders and he is, finally, above it all where presidents belong, and the polls are already inching up again, to and above 50 percent at last.

Like a carefully rehearsed dance of the veils, Trump has attacked, surmounted the Russian collusion fraud, turned the tables, won the great slanging match, and is now rising above the fray to the relief of those who don’t like such indignities. It is an astonishing change from the near-chaos of the administration’s early days.

Patriots are reminded that while desperate, obstructionist Democrats are handing PDJT keys to second term, patriots must follow through and elect new patriot lawmakers in 2020 elections who will promise to fully support PDJT’s vision for MAGA, now KAG.

Trump cuts his way through the democrats like a canon ball with his genius or steals among them like a plague with his supposed corruption. Lesser men will bow to the power of his genius. They hate it, slander it, but if genius persists… they bow to it. If the democrats fail to smother genius in a mud puddle, they fall on their knees and worship it. 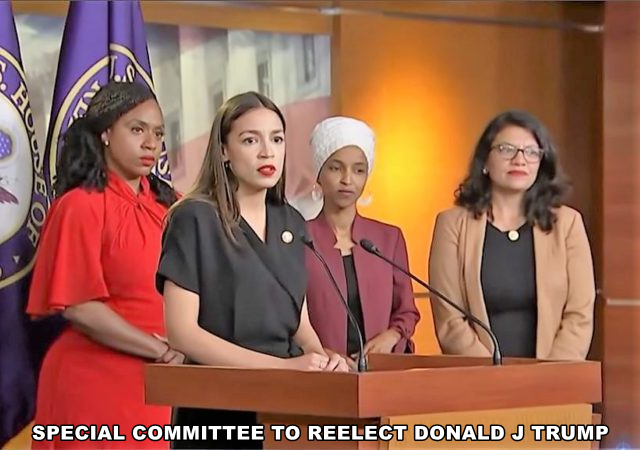 Cuz I didn't have to reach for my dictionary once ... so I'm wondering ...

“Senator Warren is the chief challenger”

I see what you did there.

Sometimes, Conrad Black kicks ass.
This is one of those time.