Nancy Pelosi claims Russians have something on President Trump to sway his administration to not to take action after learning that Moscow spies offered bounties to Afghan militants to kill U.S. troops.

[snip]Pelosi said during an interview on ABC’s “This Week” that throughout Trump’s presidency he has ignored allegations against misdeeds committed by Russia, but that the new reports on bounties “is as bad as it gets.” 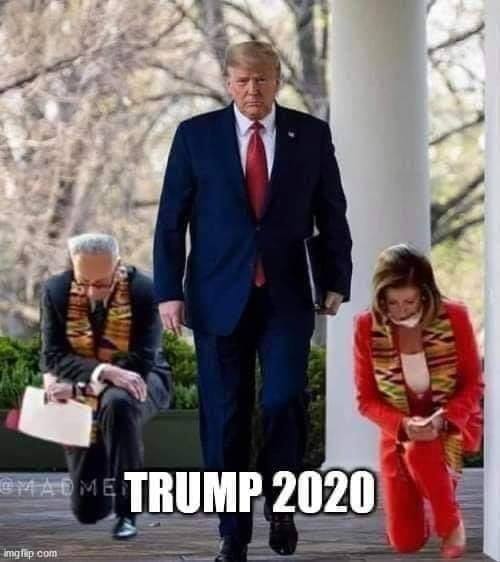 Well if Pelosi wants to get real Obama and VP Biden financed and armed multiple Islamic extremist groups that turned their arms against US troops.... They also financed even Iran that did that same both directly and through their proxies.

Nancy Pelosi makes stupid claims every day it’s lets try this story all the time,she knows her party is dead and she help master it.

I think it had something to do with pallets of cash.

I could not find the president’s response.

8 posted on 06/30/2020 9:51:54 AM PDT by Liz ( Our side has 8 trillion bullets; the other side doesn't know which bathroom to use. http://www.fr)
[ Post Reply | Private Reply | To 1 | View Replies]
To: yoe
Why would the MSMs care about bounties, they hate American soldiers and would gladly put out their own bounties.
It's only to embarrass Trump.
It's either:
Trump knew but didn't tell us (bastard!).
Trump didn't know but he should have (bastard!),
Trump knew and didn't do anything (bastard!).
Trump overreacted and is starting WW3 over an unconfirmed rumor (now it's just a rumor) (bastard!).

Not among the options: Trump is carefully assessing the situation before he speaks or acts.

The term Blackmailing is racist and I demand that it be removed from our venacular. /Sarcasm off

This lame article contains no Trump response to Pelosi’s accusations.

I have heard fourth graders out on the playground present more logical arguments during a “gang-up” squabble than Nancy Pelosi is presenting.

She merely asserts, and does not provide any progression from Point A to Point B, or relate any supporting evidence, that any reality is involved before she jumps to an altogether absurd conclusion.

But man, is it ever a grand attention bid.

12 posted on 06/30/2020 9:59:57 AM PDT by alloysteel (Freedom is not a matter of life and death. It is much more serious than that..)
[ Post Reply | Private Reply | To 4 | View Replies]
To: Vaduz
It is time for someone to determine if Pelosi is not an alcoholic whose judgement and public statements are warped by her alcoholism?

Several years ago when the government furnished her with an airplane to commute non-stop between DC and home in CA, the cost to supply the airplane with booze was published.

I forget the figure, but it was a big number.

If that was the cost only while on the airplane, her total bill including while at home and while in DC must be an interesting number.

That along with her slurred speech, odd facial expressions during public appearances are also an indication.

Once determined to be true, if it is, that she drinks too much, President Trump should point it out in every response to her public statements.

13 posted on 06/30/2020 10:03:21 AM PDT by old curmudgeon (There is no situation so terrible, so disgraceful, that the federal government can not make worse)
[ Post Reply | Private Reply | To 5 | View Replies]
To: M. Thatcher
This lame article contains no Trump response to Pelosi’s accusations.

I AGREE WITH YOU.

Lawmakers need to be accountable for lying. We need take back the House, hold the Senate and re-elect Trump. Then next year replace RBG and possibly one other on SCOTUS.

Then for the next two years, we bring members of congress in front of the Senate Judiciary Committee and expose the lies.

The term Blackmailing is racist and I demand that it be removed from our venacular. /Sarcasm off

perhaps if we just used the term “blackmailing” niggardly.

It would be an insult to all snakes calling lowlife vermin pelosi a serpent.