Thanksgiving, the Prophets and the Eucharist
TheSacredPage.com ^ | 11/25/10 | Michael Barber, Ph.D.

Thanksgiving, the Prophets, and the Eucharist 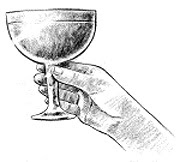 In honor of Thanksgiving, I thought I'd post on why Thanksgiving is central to the Church's Eucharistic theology--highlighting some ancient Jewish roots that are often overlooked.

The Prophets and Cultic Sacrifice in the Future Age

In the Old Testament it is clear that in the messianic / eschatological cultic offerings will not come to an end. To think otherwise would be to be profoundly “unJewish”.

One sacrifice especially linked with the future ingathering of Israel is the thank offering (or the tôdâ). The tôdâ was one of the peace-offerings.[1] Specifically, this category of sacrifice seems to be linked with the idea of deliverance; in fact, the LXX describes them as θυσίας σωτηρίου, a “sacrifice of salvation/deliverance” (cf. LXX Lev 7:11).

It is not surprising then that Jewish texts link this sacrifice to the future deliverance of Israel in the eschatological age. For example, Psalm 107:22 describes those returning from exile, saying, “﻿let them offer sacrifices of thanksgiving, and tell of his deeds in songs of joy!”[2] In addition, Jeremiah 33:10–11 reads:

It is interesting to note that, citing this passage, the rabbinic tradition explained: “In time to come all offerings will come to an end, but the thanksgiving-offering will never come to an end” (Pesiq. Rab. 9:12).[3]

Jesus, the Eucharist and the Thanksgiving Sacrifice

In my dissertation (currently I am talks with a publisher!) I make the case that if Jesus saw himself as inaugurating the eschatological ingathering of Israel, as, e.g., his appointment of twelve apostles seems to symbolize, it should also be expected that he would have entertained the notion that there would be an eschatological cult?

But how did Jesus envision a new cult?

Is it merely coincidence then that all four accounts of the Institution Narrative highlight Jesus’ giving thanks (εὐχαριστέω)? Hartmut Gese has argued for a connection with the thank offering, observing that the rest of the passion narrative is especially linked with psalms which were closely linked with the tôdâ offering, e.g., Psalm 22.[4]

By itself, the language of giving thanks need not point to the tôdâ. However, especially given the fact that Jesus also seems to refer to Jeremiah’s new covenant prophecy, which is followed by a vision of the returning exiles bringing tôdâ sacrifices (cf. Jer 33:11), I am inclined to his proposal.

Much more could be said here—you’ll have to read my thesis!—but I just thought I’d post this today to suggest that Thanksgiving is ultimately central to the Eucharistic theology of the Church. As Joseph Ratzinger, long before becoming Pope Benedict, once put it, “The Lord’s Supper is the toda of the Risen One.” [5]

[2] That the term tôdâ in such contexts refers to actual cultic sacrificial offerings and not simply a spiritual sacrifice is clear. See Norman Whybray, Reading the Psalms as a Book (JSOTSSup 222; Sheffield: Sheffield Academic Press, 1996), 113 “. . . there can be no doubt that the reference to sacrificial offerings was literally intended. Whether or not a spiritualization of the reference was possible, there has once again been no editorial attempt to encourage this by textual alteration.” In addition, see Psalm 69 in which the tôdâ offering is linked with the hope of God saving Zion and rebuilding its walls (cf. Ps 69:30–35). Indeed, the superscription in the LXX (Εἰς τὸ τέλος, ὑπὲρ τῶν ἀλλοιωθησομένων, τῷ Δαυιδ) seems suggestive of eschatological undertones. See Mitchell, The Message of the Psalter, 19; Schaper, Eschatology in the Greek Psalter, 90; C. A. Briggs and E. G. Briggs, The Book of Psalms (ICC; 2 vols.; Edinburgh: T & T Clark, 1906-7), xcvii.

“toda”. Thanks for that insight. That provides absolute proofs that the Catholic “church” follows entirely the Jewish priesthood, which is Jewish, not Christian, for today’s free Grace of God in which Christ is the HEAD of the spiritual Church of grace believers; Colossians 1:18.

Christ was of Jewish descent. The apostles and first disciples went to the synagogue on Saturday and then celebrated the Eucharist in little home Masses on Sunday. That was the beginning of the Catholic Church — from Christ straight down through the apostles and disciples.