Sorry to hear that.

Traditional heathen Chinee architecture has nothing to do with Commiedom.

Thank you for Oracles!! BTW I know there are many freepers lurking and reading.

Posting blind so please forgive me if this has been discussed. Neon Revolt has someexplosive information today about the spy charged by Huber and a possible connection to Adam Shiff.

Gotta run, sorry, no time to post it. Maybe one of you can grab it. It’s on his blog, way down close to the end.

Copying and hoping someone can run with this. I have no time.

It was late and I left off a little info

So first lets "set the stage"

Then the traitors patriot definition 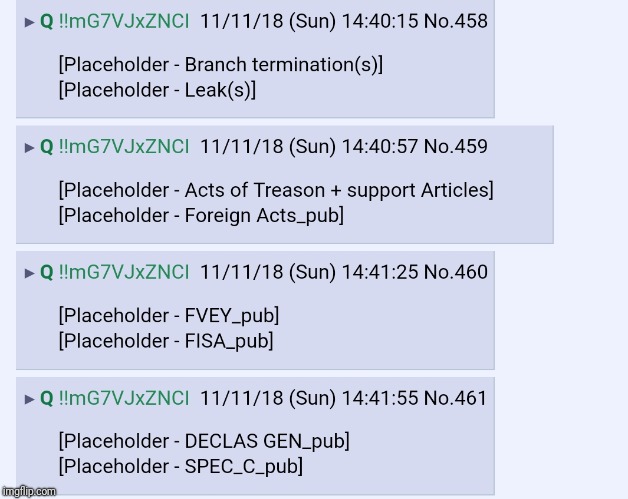 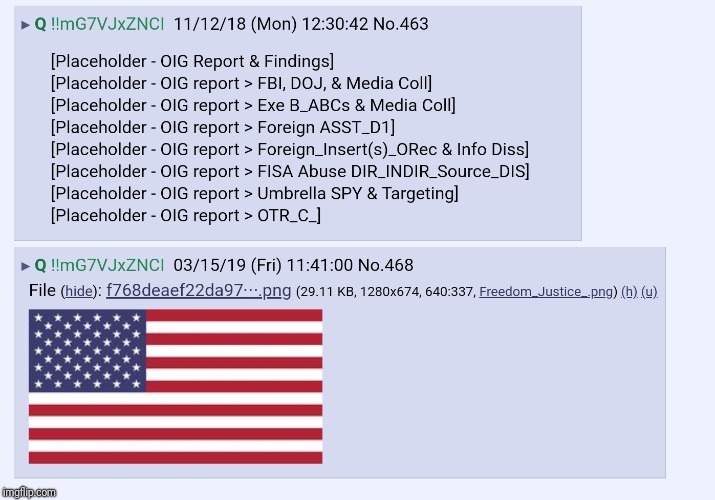 So cause you read the Q drops in reverse order newest to oldest on. qmap it didn't make as much sense, but when you read them from the patriots fight board like above you can see an outline what is coming...

here is my repost of the patriots fight graphic decode

Not sure About branch termination and leaks

But then acts of treason and foreign acts

Then I see multiple OIG reports

And OTR not sure maybe 'other' or office of tax revenue

And then I see a flag that says freedom and justice

This is military planning at it's finest

I thought that, too.

Most Excellent - now if you declare yourself caught up again, the “Q” drops may proceed! ;)

https://twitter.com/realDonaldTrump/status/1107462671614570496
For a while, negative comments by Ryan Hill were at the top of the list with positive comments by qanon further down the list. Then after a while, the qanon comments moved to the top and the RH comment moved further down the list.
This flip-flopped back and forth a couple of times over the next (approx) 30 minutes.

Just checked and on that “MAKE AMERICA GREAT AGAIN!” again post all positive for at least the 1st 20 posts!

Checked his current tweet from 15 minutes ago and 1st 3 replies are Ed Krassenstein crap?

Looks like Krassenstein has been pushed way down. All the positive comments are now leading dozens and dozens of tweets.

The key was what bitt noted - set aside what generally & I were seeing after Trump’s tweet, but, then, after the “Q” post then came with the link to the tweet, it’s inevitable that people following drops would go to the tweet and vote up the “qanon76” reply - we’ve seen servers get crashed before (think Avenatti). So my guess is that reply quickly gained something like 10K upvotes. Did “Ryan” DS bot or whatever that was get corresponding upvotes? Not likely ... so how can it be explained that the “qanon76” reply then fell in rank. The only explanation is that there’s funny business afoot by @Jack

This isn’t obvious anymore, is it?

BREAKING: Redacted copies of Michael Cohen search warrant to be made public tomorrow.

Ima couple 100 posts behind.. but... Last year we had drop #1144 and many of us noticed a change in the way the internet worked for a while. Some security changed, sites once protected were now open and some filtering algorithms seems to change.

Coulda been a test run for Q's latest troll of Tweeter. 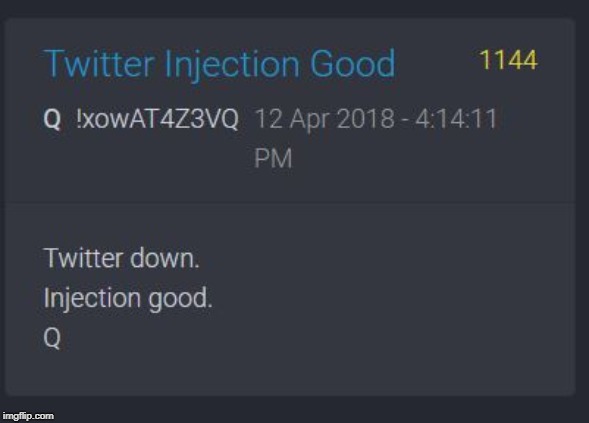 I’ll ask again: Has anyone loaded and used the Ghidra disassembler?

BREAKING: Redacted copies of Michael Cohen search warrant to be made public tomorrow.
~~~~~~~~~~

Did we ever know who approved that warrant? Is that important?

“Such a raid requires both high-level approval and an “elaborate review process.”

Authorization for such a warrant comes from either the district’s US attorney or an assistant attorney general, as The Washington Post wrote.

Eric Columbus, a former Obama administration official who served in the Justice Department, told Business Insider that key actors involved with the warrant were Trump administration appointees. Geoffrey Berman, the interim US attorney for the Southern District of New York, was appointed to his role by Attorney General Jeff Sessions while Deputy Attorney General Rod Rosenstein, and FBI Director Christopher Wray were nominated by Trump. Two of the three, Berman and Wray, were personally interviewed by Trump for the jobs.”

Berman was personally interviewed by POTUS? The more you know!

I have not played with Ghidra.