In an unprecedented show of arrogance and disregard for the electorate, Democrats have called American citizens who dare to dissent from Obamacare unAmerican, a paid mob, political terrorists, brownshirts and Nazis, among others.

Now, opponents of socialized medicine and the Obama agenda are being depicted as Ku Klux Klan members who want to lynch Barack Obama. That's the message of this flyer which was found on cars outside the parking lot at South Lakes High School in Reston on Tuesday night, after the town hall meeting with Jim "I Like To Hit People" Moran and "Screamin'" Howard Dean.

UGLY but Obama, Holder and the CZARS are pushing so hard that some are playing into their hands.

OR...PAYING someone to do this!

This sort of thing is so typical of Moran ~ he, too, suffers from a severe case of brain damage ~

The racist card is getting old and will cause a backlash.

7 posted on 08/28/2009 5:38:10 AM PDT by DJ MacWoW (Make yourselves sheep and the wolves will eat you. Ben Franklin)
[ Post Reply | Private Reply | To 1 | View Replies]
To: stratman1969
Now, opponents of socialized medicine and the Obama agenda are being depicted as Ku Klux Klan members who want to lynch Barack Obama. This obviously isn't coming from our side. We're the sane ones in this debate.

The crazier and more insane the left gets, the better we look. Who would want to put these lunatics in charge of their health care?

8 posted on 08/28/2009 5:41:46 AM PDT by concerned about politics ("Get thee behind me, Liberal")
[ Post Reply | Private Reply | To 1 | View Replies]
To: stratman1969
The other Democrat Representative in this area, Gerry Connolly, has yet to criticize Moran over anything whether it's whoring in the moonlight, harrassing children, beating his wife, or now calling critics of Obama care "KKK" types.

People have this mistaken idea that Connolly (pronounced "cannoli" and he looks like he's had plenty of 'em) is a decent man. He's not if he's going to buy into this stuff.

True...when you bring Howard Dean on to be your brain because your own brain can’t answer your constituents questions, you are in bad shape.

10 posted on 08/28/2009 5:43:19 AM PDT by txrangerette (Just say "no" to the Obama Cult.)
[ Post Reply | Private Reply | To 5 | View Replies]
To: DJ MacWoW
The racist card is getting old and will cause a backlash.This is the work of the democrat politicians. I hope they're smart enough (which I doubt) to see what they've done to this country and try to fix it before it gets too late.

We can't fix the racial divide in the U.S., because the racism isn't coming from our side. It's out of our hands.

I believe that the Dems have caused it on purpose.

I’m so sick of racists throwing out the race card.

13 posted on 08/28/2009 5:54:30 AM PDT by armymarinemom (My sons freed Iraqi and Afghan Honor Roll students.)
[ Post Reply | Private Reply | To 1 | View Replies]
To: DJ MacWoW
I believe that the Dems have caused it on purpose.I agree. They're going to take the country down with them.

I believe the democrats house of cards is about to fall and right now they're fighting for their lives.
The tax slaves are so overburdened, there's no more feed for the democrat base. No free hand outs, no votes for democrats.
This is why Oboma is power grabbing every American freedom we have. His base whats to feed, and they want to feed big. The democrats are to the point where they have to steal everything they can get their hands on now or be devoured by their own base.

It's like the democrat politicians are the mystery whore of Babylon sitting on the free hand out beast.

I agree with all of that. I also think they want it to get nasty and vicious. Soon. They woke up a sleeping giant and are afraid. They need to club the giant to maintain control. Only God knows where this is going to end. And I mean that literally.

They are using the image of the KKK to frighten people and seize power. The race care is getting old fast and if there isn’t the racist backlash they want—they will manufacture it. All of this is coming from the left. Don’t believe anything the left or Obama says. He has but one goal I believe, to be president for life of a socialist state where all are equal in their misery and the power elite live in guarded mansions and eat well as the rest seek government cheese and bread to live. Fear is coming and the midnight knock on the door. I hope I am wrong.

These flyers were found on cars outside the Moran-Dean town hall meeting this week: 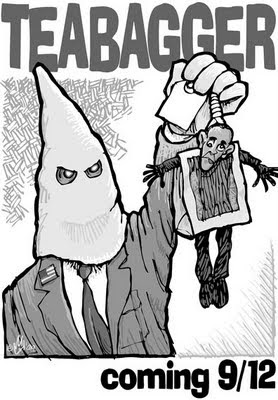 Marooned in Marin, via Free Republic, has more on these flyers that were found on cars outside the South Lakes High School in Reston on Tuesday night.

The cartoon was created by Mike Flugennock who is another another disturbed Far Left political cartoonist. He says he created the flyer to announce "the imminent arrival of the National Teabaggers' Convention coming to Washington DC on the 12th of September."

And while every Joe Sixpack in the country is getting the Sarah Palin treatment from assholes like this cartoonist, the powers that be just keep undermining the economy. Have you seen this? Some economist estimates that the real unemployment rate could be 20.6%?"

Did you see this? Cop didn’t like his 0bama poster.
http://www.youtube.com/watch?v=hIKPKjl0-pg&eurl