Believing that Democrats are poised to engage in massive vote fraud in key battleground states, the Republican Party is planning to deploy thousands of monitors to challenge questionable voters.

In a page one story in the New York Times Saturday, the paper said the Republican party in Ohio alone has identified about 35,000 new voters who they believe to be fraudulent or questionable.

The Republicans claimed that 35,000 new voters were sent a mailed notice confirming the registration. The party said in every case the U.S. Post Office returned the notice as "undeliverable."

To combat the possibility of massive vote fraud the Republicans plan on deploying thousands of operatives to challenge questionable new voters on election day.

The Times quoted Ohio officials as saying the Republican effort is one of the largest they have ever seen.

But the Republican Party's moves are defensive. The Times has reported that Ohio Democrats have out registered Republicans by a ratio of 5 to 1.

Democrat 527 groups have reportedly been spending between $150 million to $300 million this year on voter registration and turn out efforts.

Apparently those monies have helped create a wave of fraudulent registration programs.

For example, in Ohio election officials are reviewing the voter registration of Jive Turkey Sr., who was among 1,284 suspicious applications that Cuyahoga County, Ohio, election officials will turn over to prosecutors to investigate for potential fraud.

The police said the man who created these registrations claimed he was paid in crack cocaine for his registration efforts by a representative of the NAACP.

The GOP’s watchdog plan has local voting officials in Ohio ramping up for unprecedented disruptions in the voting process and others crying racial foul because the Republicans have targeted areas with high numbers of minority voters.

But Robert Bennett, the state GOP chairman, says the demographic issues are moot. "I'm not going to play this game of suppression and intimidation," he said. "Voter fraud is voter fraud, no matter where it occurs."

Democratic Party operatives insist, however, that the GOP effort is nothing short of class warfare. "Their whole goal is to try to lessen the voter rank and file," Jimmy Dimora, head of the Cuyahoga County Democratic Party, told the Plain Dealer.

The Republicans are facing an increasingly ominous situation. They could actually win the election, but en up having it stolen during the ballot process.

Anecdotal and empirical evidence suggests the vote fraud is teetering on massive proportions, including reports:

# The Orlando Sentinel examined voting records from Florida, Georgia and North Carolina. The found that in more than 68,000 cases voters with the same names and dates of birth were registered in two states.

But Ohio may the most critical swing state. President Bush won the state by just 30,000 votes in 2000, and both candidates believe they must win there to take the White House.

Republicans and Democrats have formally filed lists of challengers across the state who will patrol the polls on Election Day. These designated representatives may challenge individual voters -- as well as watch each other.

Adding to the mix are so-called “provisional ballots” given to voters who show up at the wrong polling place. Even at this late hour, how these ballots will be issued and counted remains an undecided issue. A legal wrangle between Ohio Democrats and Secretary of State Ken Blackwell, a Republican, is now before a federal appeals court.

One election official told the Cincinnati Enquirer that in his opinion Ohio has never seen what's about to happen.

On January 16, the Congress will elect the president and vice-president after unparalleled Dem voter fraud turns the election into chaos.

It's about damn time

I'm not going to play this game of suppression and intimidation," he said. "Voter fraud is voter fraud, no matter where it occurs."


You gotta just love this guy!

I'm not going to play this game of suppression and intimidation," he said. "Voter fraud is voter fraud, no matter where it occurs."


You gotta just love this guy!

How this voter registration nonsense got started is beyond me. People should be required to report to the government registration office in person. This nonsense of having George Soros hiring tens of thousands of teenagers and the chronically unemployed to march around with clipboards, figuring out new and novel ways to manufacture registered voters is an open invitation to fraud.

Just as long as they actually DO something about it instead of just making "plans."

democrats are going to screw around and start another civil war...

It got started by ~40 solid years of one-party Democratic rule of Congress.

No they won't. If they win through fraud and intimidation, the GOP will sit around and grumble about it, but do absolutely nothing to fight back.

Well, at least it is not 35 to 1. Click image to see confession of a man that registered 35 times. 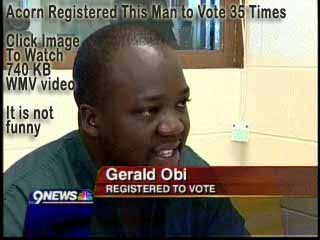 Yes, I edited the laughing part, but the rest is accurate. If you need the whole vid, FreepMail me.
12 posted on 10/23/2004 4:27:19 PM PDT by DocRock (Support the tagline tax relief fund. Donations can be made on my homepage.)
[ Post Reply | Private Reply | To 1 | View Replies]
To: truthandlife
The thing about phony registrations that come back as undeliverable is that they were collected by a bunch of scam artists out to make a buck.

You can register a million but with aprropriate poll monitoring only people who actually show up will cast ballots.

13 posted on 10/23/2004 4:28:06 PM PDT by Rome2000 (The ENEMY for Kerry!!!)
[ Post Reply | Private Reply | To 1 | View Replies]
To: truthandlife
We need to develop some other system for the Registration of voters. Motor Voter did not work and paying people to register voters looks to be somewhat fraudulent.

Perhaps we need to use Social security Cards for voting. Any citizen with as SS Card could vote and we could get rid of the expense and corruption of Registration Drives.
14 posted on 10/23/2004 4:31:48 PM PDT by pete anderson
[ Post Reply | Private Reply | To 1 | View Replies]
Comment #15 Removed by Moderator

"democrats are going to screw around and start another civil war..."

I wouldn't bet on that, if I were you. This is life and death we're talking about...and if the Dems steal the election through voter fraud, there will be HELL to pay. Trust me.

Vote with ID and SS Card. No Registration Required and little latitude for fraud.

What if the dims know which ones are fake? I've seen Election Judges and their clerks in dim-controlled precincts cast a ballot and sign for every voter who did no show up.

I have a different take on all this. First, of course the DemonRats are going to lie, cheat, and steal. That is what their party represents, but, truth be known, we have had a Republican Congress and a Republican President and they have done nothing in the last 4 years to avoid the likely potential for massive voter fraud.

Where have they been? Why haven't they taken serious steps to overhaul the system? The very least they could have done would have been to require that every single voter provide some form of photo id before registering and voting!