WASHINGTON, March 10 — In the months before announcing his bid for the Republican presidential nomination, former Gov. Mitt Romney of Massachusetts contributed tens of thousands of dollars of his personal fortune to several conservative groups in a position to influence his image on the right.

The recipients of Mr. Romney’s donations said the money had no influence on them. But some of the groups, notably Citizens for Life and the Family Institute, have turned supportive of Mr. Romney after criticizing him in the past.

Coming on the eve of his presidential campaign, Mr. Romney’s contributions could create the appearance of a conflict of interest for groups often asked to evaluate him. All the groups said he had never contributed before, and his foundation’s public tax filings show no previous gifts to similar groups. Its 2006 contributions will become public with its tax filings later this year.

Give the money back, if the source is not sincere.... Don't be corrupt!

What, did they expect him to be giving to NARAL and Air America?

The New York Times' David Kilpatrick has a story on Mitt Romney today that charts Romney's financial support for conservative causes and groups.

A few days ago Kilpatrick called me and asked if Romney had paid me to write A Mormon In The White House?

I blogged about the call and the insulting question on the day it occurred.  Today's article does not mention the call or my post about it.  How many other groups and individuals did Mr. Kilpatrick call and ask if Romney had "spread cash around" in their direction, to quote Mr. Kilpatrick from our call, only to be told "absolutely not?"  Would it matter if Mr. Kilpatrick had been fed a dozen rumors from anti-Romney activists and called each of them only to be told in no uncertain terms that no such payments had occurred?  This is why MSM loses credibility every day with the center-right: An MSMer starts with a thesis and meticulously compiles all the evidence that supports it and leaves off with all the stuff that doesn't.

Mr. Kilpatrick also quotes  the group "Mass Resistance" as being critical of conservative groups accepting support from Romney, but does not offer any background on the group.  A bit of reading, research and reporting on the group and its founder Brian Camenker might have been useful to the Times' readers.  Quoting Mass Resistance without context is a lot like quoting "The Clinton Chronicles" about Bill and Hill without comment.

If you total the donations "uncovered" by the Times for this article, they total less than $150,000 --hardly chump change, but so small compared to the budgets of the organizations involved as to mock the premise of the article.  The article fails to indicate the number of dry holes Kilpatrick dug and doesn't provide background on the "critics" it cites.  Mr. Kilpatrick was personable, and certainly skilled.  But this isn't objective journalism.

It is agenda journalism.

I heard Hewitt's show the day(s) this first came out: He was very upset at the (Boston MSM) writer pushing this story: and (correctly) believes it is further evidence of Mrs. Clinton's attack media pushing her faux fax-news-by-MSM-press-release agenda.

In a related story that Kirkpatrick will not write, Pro-Abortion and Pro-Homosexual agenda groups HATE MITT ROMNEY.

I was challenging those who claim he is not conservative.

He is sure qualified to run when they are cashing his checks. No complaints then.

10 posted on 03/11/2007 11:40:23 AM PDT by rlmorel (Liberals: If the Truth would help them, they would use it.)
[ Post Reply | Private Reply | To 3 | View Replies]
To: Ernest_at_the_Beach
WASHINGTON, March 10 — In the months before announcing his bid for the Republican presidential nomination, former Gov. Mitt Romney of Massachusetts contributed tens of thousands of dollars of his personal fortune to several conservative groups in a position to influence his image on the right.

We've arrived at the criminalization of politics.

I hear he gave money to Freerepublic too. LOL!

Where is my cashola?

Mitt's too smart for that. If he did, they'd give 20% of Mitt's NARAL donation to Hitlery and 80% of it to Giuliani. Just like they've done in the past.
14 posted on 03/11/2007 2:19:46 PM PDT by George W. Bush
[ Post Reply | Private Reply | To 3 | View Replies]
To: msnimje
In a related story that Kirkpatrick will not write, Pro-Abortion and Pro-Homosexual agenda groups HATE MITT ROMNEY.

And they love Rudi. Just like the MSM does.

All these attacks on Romney and the attempt to foist Rudi on the GOP makes me look harder at Romney as someone who really should be seriously considered. 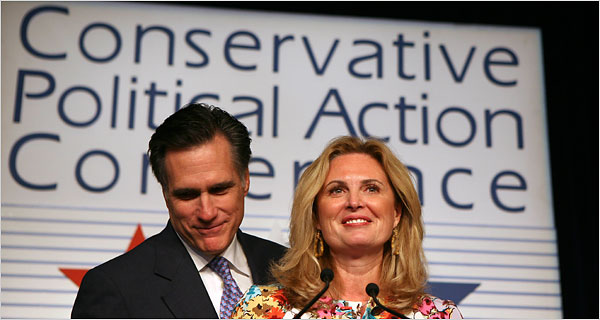 I would argue that corruption in this case is thinking that you own politicians anything.

I hate to sound dumb but can't a politician contribute to organizations? Also, that money is not exactly high roller dollar figures. But to get back to my original question, what's wrong with that? How is it corrupt? I'm asking sincerely, not sarcastically.

I'm not disagreeing with you. If you're a politician who is in it because of your convictions instead of personal ambition, why wouldn't you? As for the Heritage Foundation, etc, they run the risk of looking like they're up to the highest bidder, beholden to even the least Republican of Republicans. But that's their problem.