An overlooked nook on our planet that may offer some smart lessons on how to cultivate the energy we need.

Problems linked to foreign oil dependence are real and frightening. With oil prices north of $100 per barrel, constrictive environmental regulations proliferating, and incidents of pollution-related illness piling up, research into alternative energy sources is all the rage.

As common as these efforts are becoming, it seems they still fall short of addressing the enormity of the crisis.

Rather than fixate on the problems, however, let’s take a moment to look at a real-world example in an unexpected corner of the globe that just might have a few solutions to offer.

Eleven hundred years ago, the Vikings used wind power to sail to the tiny North Atlantic country of Iceland. Today, their descendants are using other readily available and clean energy sources to “go green.” In fact, Iceland, in its effort to reduce dependence on imported oil and clean up its environment at the same time, is trying to become the world’s first petroleum-free economy.

“An Eternal Machine Created by the Almighty”

Necessity is the mother of invention—and for Iceland, it certainly is a motivating factor. The island nation has no coal, no petroleum reserves, and no trees (the Vikings used up all the timber centuries ago—quite the environmental faux pas of their own). Rather than freeze in the dark, Icelanders decided to innovate.

During the 1970s, around the time of the Arab oil crisis, the need for cheap energy became critical. With oil rationing occurring around the world, Icelandic scientists analyzed their options and realized they had harnessed only a fraction of Iceland’s potential energy sources.

In a 2003 interview, President Olafur Ragnar Grimsson described his nation’s situation this way: “We have this eternal machine in this country created by the Almighty consisting of the fire below under the ground and the glaciers and the water that comes from the sky, and it goes on and on, year after year, century after century, creating this fascinating source of energy” (abc, Foreign Correspondent, Oct. 1, 2003).

So Iceland set out on an ambitious and risky program to develop its existing resources. Rather than import every joule of their energy, Icelanders drilled wells to tap hot underground water and built a grid of pipes throughout the entire city of Reykjavík to circulate the water to heat the city’s homes and offices. Soon, Icelanders were also using their volcanoes and many rivers to generate copious amounts of geothermal and hydroelectric energy.

“Most of the geothermal development for the last 10 years has been in Iceland,” said Asgeir Margeirsson, head of geothermal company Geysir Green Energy. “There has been a lot of development here whereas there has been some sort of stagnation in the other countries, and not too much development, like the U.S., New Zealand or Italy. Until recently,” he said (National Public Radio, Dec. 3, 2007).

In the 1960s, virtually every single home had a heating oil tank in the backyard. Diesel-burning oil trucks constantly trundled back and forth, filling and refilling. Back then, geothermal power cost much the same as oil to heat homes.

Today, Iceland’s grand gambit is paying off. Iceland no longer imports any coal or oil for heat, and energy from Iceland’s hot rocks warms 95 percent of Iceland’s homes. Seventy percent of the island’s energy is renewable, and geothermal heat costs five times less than heat generated from oil.

But Iceland isn’t stopping there. The modern Vikings want to do away with gasoline and diesel reliance as well. For that, they are turning to hydrogen.

In January, Iceland announced the creation of the world’s first hydrogen-equipped commercial vessel. The 155-passenger Elding (which means lightning) is considered the first step toward converting Iceland’s entire fishing fleet—a lofty goal, since Iceland’s fleet is one of the largest in the world.

To some scientists, hydrogen has the potential to be an ideal energy source. Visionaries since Jules Verne have sought ways to turn water to fuel; after all, 70 percent of the Earth’s surface is water. Now, the visionaries’ technology exists, and hydrogen gas can be made from plain old water. Electricity from another source (in Iceland’s case, hydroelectric or geothermal) breaks the hydrogen molecules off the water molecule. Oxygen is released, and captured hydrogen can then be used as fuel.

But the best part is that when you’re running on hydrogen, only water vapor comes out the exhaust pipe. Electricity and h_‚‚o are its only products—no pollutants. No stinky, noxious exhaust.

There is only one catch—and it’s big. Using current technology, it takes more energy to break the hydrogen from the water molecule than can be gained in burning the hydrogen. That is why no self-sustaining water-powered cars have been built to this point. If you want the hydrogen power, you need to use additional energy from somewhere else to get it.

For many countries, that would be a huge problem, but Iceland doesn’t sweat it because almost all of the nation’s domestic power generation is clean and cheap. It doesn’t need to use dirty natural gas or coal to produce hydrogen; it has excess “green” power to spare—plenty to provide for its hydrogen vehicle needs. And, as it turns out, at a price lower than conventional gasoline.

The hope is that as technology advances, the energy required to break hydrogen from water will decrease, and using hydrogen will become more economical for all countries. In the meantime, green energy is already paying off for Iceland.

Hydrogen-powered ships are just the beginning. The whole country is undergoing a clean energy revolution. Already Daimler Chrysler and Toyota have hydrogen-powered cars running there. Hertz offers hydrogen-powered autos for hire. Jon Bjorn Skulason, head of Icelandic New Energy, believes that by 2035, most of Iceland’s gasoline vehicles will have been phased out in favor of the new clean technology.

President Grimsson said he wanted to “show the rest of the world that it is indeed possible to have an entire society or a city comprehensively based on a new type of energy, energy that doesn’t threaten the life on Earth … and is friendly to the future of mankind” (op. cit.).

Could the Iceland model pay off on a larger scale? The possibilities are exciting to contemplate.

The United States, for example, does not have the exact geological advantages Iceland does, but it certainly has more than it is using. Much of America’s western seaboard is volcanically active. California is already utilizing some geothermal power. A 2006 report by the Massachusetts Institute of Technology estimated that the extractable geothermal energy in the U.S. is a whopping 2,000 times the primary energy the nation consumed in 2005. Factoring in reasonable technology improvements in the future, the report said the economically extractable amount of useful energy could increase by more than a factor of 10, thus making geothermal generation sustainable for centuries.

All that clean energy is available, just waiting to be harnessed—and that is just one type of nonpolluting power.

What other aspects of the creation are just waiting to be unlocked to provide sustenance for society? What else do we still not understand about the laws of chemistry and physics that might open up whole new power-generating avenues, taking us in completely unexpected directions?

Clean, inexpensive energy is something America and the whole world craves.

Did you know that your Bible talks about a time in the near future when abundant clean energy will be the norm?

The same God who created this Earth and the universe has promised to establish a world unencumbered by the energy and pollution problems facing us today. That same God holds the keys to the physical laws governing that universe.

Looking at a society that is already taking steps toward a cleaner environment, it is exciting to think of what might be possible in the future.

I’ve heard that in the 50’s, nuclear power was going to be so inexpensive to produce, there would be no need to meter its use. Still waiting.

Let them live without ALL oil-based products, not just fuel.

Then call it and Oil-Free Economy.

They would then learn the value of oil isn't just for its fuels.

Ping is right...but got news...pasadena will still have a haze from the trade winds that carry the desert sands from Africa and Asia easterly.

Why the hell aren’t we doing this?

We could do more w/ Geothermal, but Iceland is totally unique in every way. Phenomenal easily-accessible geothermal resources, small nation, etc.

We can, but only in specific areas. Iceland has a unique geology that affords them this power source.

Everywhere else, it would require some real work to develop the resource.

I don’t want to rain on everyone’s parade but the population of Iceland is 285,000. The USA has over 300,000,000 residents. That means we have 1000 times the population of Iceland. Also, our land mass is much greater. I wouldn’t expect the solutions to Icelands energy problems to be feasible on a scale the size of the USA. Nonetheless, we should watch how they go about the transformation...maybe we can learn something from it.

Also add in how sparsely populated it is.

There’s big areas of nothing and no one to stand in the way of geothermal energy development.

13 posted on 07/03/2008 8:45:50 AM PDT by NVDave
[ Post Reply | Private Reply | To 8 | View Replies]
To: Red Badger
To be effective Geothermal fluid temperature should be at least 300º F, although plants are operating on fluid temperatures as low as 210º F. This is not available everywhere in the US. We could do more, but it is going to remain a small portion of our need.

Many of the cooler area are suitable for home size geothermal unit for some heating.

A type of Geothermal can also be used in places where there are no volcanoes or hot springs to use for heat:

Or as Thomas Edison once put it:
“We will make electricity so cheap that only the rich will burn candles.”

The water out of my lawn pump comes out of the ground at around 68°F year round. It feels cold in the summer and warm in the winter. A simple heat pump or “swamp cooler” would work in Florida and other places not near magma vents.
Here’s one company’s solution:

I was going to ask, have they ever thought of planting trees, But then I did a little research.

When the early settlers arrived, they encountered a rich forest which they promptly cut down for construction and firewood. What they didn't realize was that, with Iceland's long winters and indirect sunlight, each tree takes about 50 years to grow back. Most of the island is now devoid of trees, but reforestation efforts are underway. 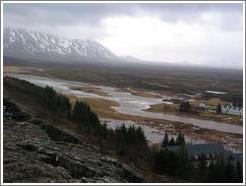 Iceland
18 posted on 07/03/2008 8:53:13 AM PDT by F-117A (Mr. Bush, Condi, have someone read UN Resolution 1244 to you!!!)
[ Post Reply | Private Reply | To 1 | View Replies]
To: Red Badger
The island nation has no coal, no petroleum reserves, and no trees (the Vikings used up all the timber centuries ago—quite the environmental faux pas of their own). Rather than freeze in the dark, Icelanders decided to innovate.

Wait, there were trees in Iceland? It must have been warmer back then.

Why would they freeze? Big Al says we're all gonna die from global warming.